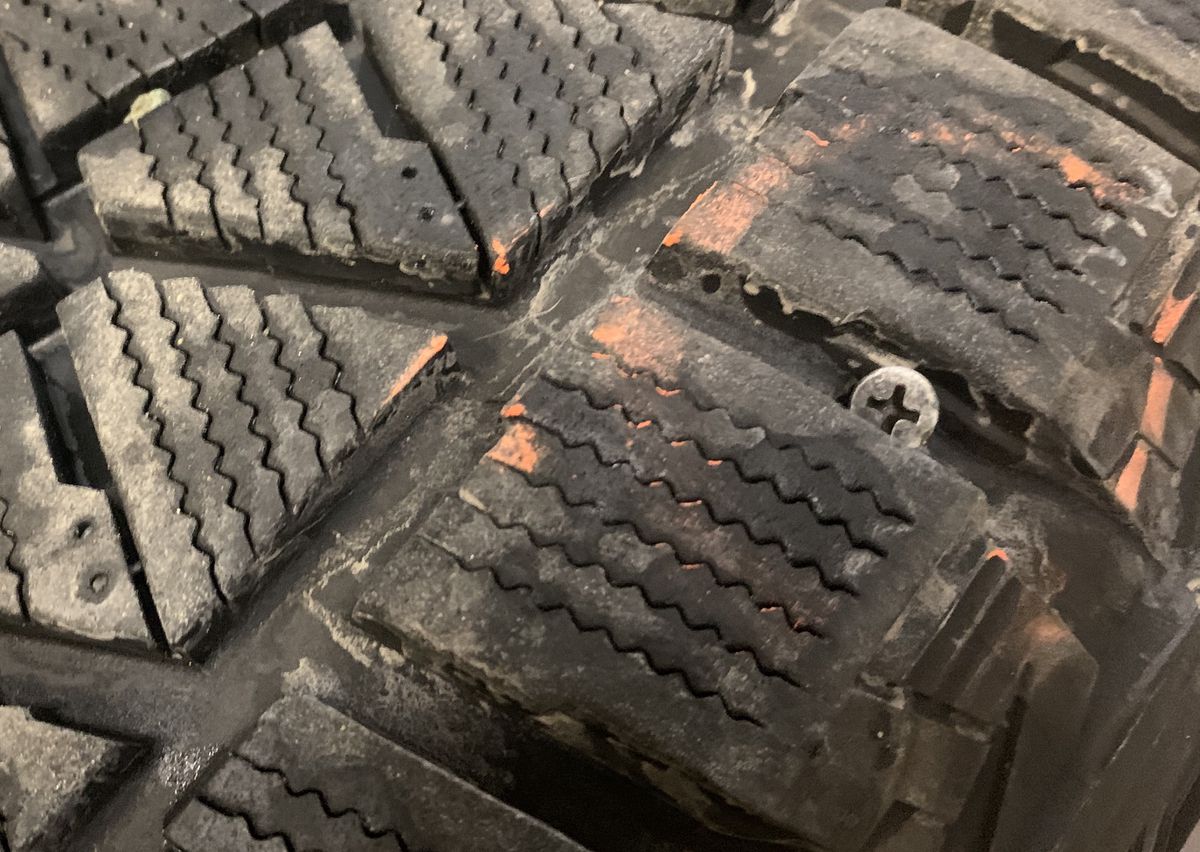 A tire with a drywall screw embedded in its tread sits inside the Alaska Tire Service lobby in Eagle River on Thursday, Jan. 23, 2020. Thousands of the screws spilled onto the road Thursday, puncturing the tires of numerous motorists on Eagle River Loop Road. (Matt Tunseth / ADN)

A tire with a drywall screw embedded in its tread sits inside the Alaska Tire Service lobby in Eagle River on Thursday, Jan. 23, 2020. Thousands of the screws spilled onto the road Thursday, puncturing the tires of numerous motorists on Eagle River Loop Road. (Matt Tunseth / ADN)

Whether they called it “screwmageddon” or a “screwpocalypse,” a lot of people in Eagle River were sure of one thing Thursday afternoon.

A wayward box of 1 1/4-inch drywall screws caused screwdemonium on Eagle River Loop Road after they got loose and found their way into the tires of dozens of motorists. Soon, a steady stream of drivers started showing up at Alaska Tire Service in Eagle River with tires that looked like they’d been battling a mechanical porcupine.

“It trickled in and then it really got …” said one of the shop’s sales associates, Leo Penor.

The Anchorage Police Department issued an alert about the screws at around 3:19 p.m. advising people to avoid the area. The statement said “a box” of screws had spilled onto Eagle River Loop and crews were in the process of cleaning up the debris.

The spill was in the northbound lanes of the road near the Briggs Bridge, and the road had to be closed from there to around Driftwood Bay Drive. It reopened at around 5 p.m. after municipal crews arrived, some of them using small hand tools to clean up the screws.

Eagle River Trustworthy Hardware co-owner Justin Phillips identified the short, sharp screws as 1 1/4-inch coarse thread drywall screws. The shop sells the screws in 1- and 5-pound boxes, but he speculated the box that fell on the road may have been a larger contractor size box, which could contain more than 5,000 individual screws.

Eagle River’s Michelle Jansen said she drove through the screws but thought they were some kind of loose rubber — like the kind put on playgrounds.

“I had no idea it was screws,” she said.

It wasn’t until she got home and saw a Facebook post about the screws that she checked her car’s tires and found them threaded.

“I had one in each back tire,” she said.

Jansen said a friend told her she had to have two tires replaced. Some people didn’t know they’d been punctured until they got home, but police said others went flat near the scene.

Eagle River’s Mike Burpee also heard about the screw job after getting home from work. He remembered driving through a black patch of debris on the road, so he checked his vehicle. Sure enough, his tires had also been punctured. Burpee said he was thankful for the small-town tire shop, which he said took the sudden surge in customers in stride.

“They’re heroes,” he said. “It feels like they really rallied around the community.”

Penor at Alaska Tire Service said the damage ranged from tires that didn’t need repair to those that had to be completely replaced. As of Friday afternoon the small shop on the Old Glenn Highway had taken calls from 16 people with screws in their tires. The most he’d seen was 28 screws in one tire.

As he spoke, a technician wheeled in a tire that had been hit with more than 20 screws, its tread peppered with the small, black metal. Penor said the technicians first spray down each tire with soapy water to identify any leaks, then determine whether the tire can be saved.

On Thursday evening, a police spokeswoman said the department doesn’t know where the screws came from.

Jansen said she understands that accidents happen. But she’d like to see whoever is responsible apologize for their loose screws.

“I just think someone should say ‘I’m sorry,’” she said.

Though the road is now open, Burpee said he might take an alternate route home for a couple weeks just to make sure. As for what to call the incident, he suggested “nailmageddon.”