How much voter approval is required to pass an Anchorage sales tax? It depends. 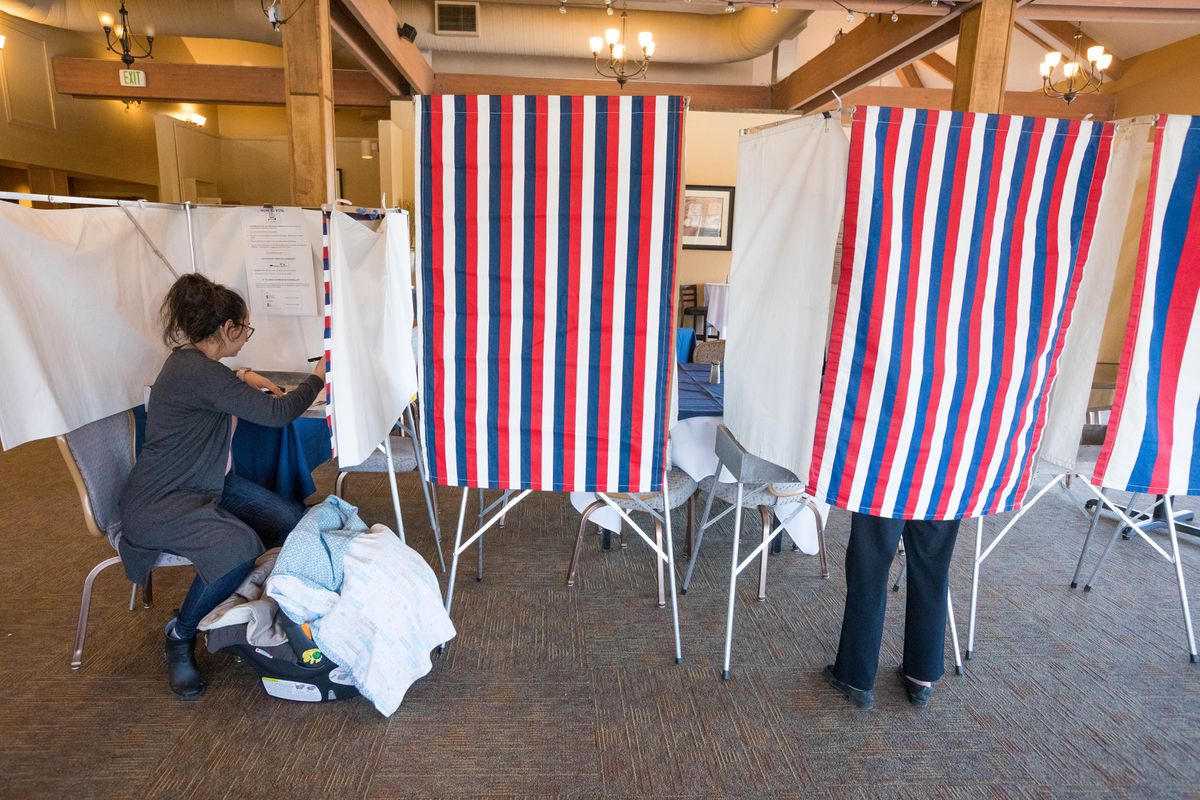 Rainna Burns fills out her ballot at an accessible vote center in O'Malley's on the Green on election day, Tuesday, April 2, 2019. With her is her 2-month-old son Bennett Burns. (Loren Holmes / ADN)

Rainna Burns fills out her ballot at an accessible vote center in O'Malley's on the Green on election day, Tuesday, April 2, 2019. With her is her 2-month-old son Bennett Burns. (Loren Holmes / ADN)

When Anchorage voters fill out ballots for the April 7 election, they are likely to see a proposal for a new sales tax. Within that proposal will be language stating that a “yes” vote also approves a one-time amendment to the city’s charter to allow a sales tax to pass with a simple majority.

By charter, a sales tax needs 60% approval to pass. But that hurdle wasn’t originally in the charter — it’s the fruit of a late-'90s effort to hinder future attempts to impose a sales tax in Anchorage.

It has worked. Anchorage still has no broad-based sales tax. More pointed sales taxes, including on alcohol, also have been defeated at the ballot box.

But Anchorage leaders say they need more revenue to address issues like homelessness. So now, local politicians and sales tax advocates are redeploying a workaround — a one-time amendment— to avoid the 60% requirement and make it easier for voters to pass a tax.

The tactic, also used unsuccessfully in last year’s attempt at an alcohol tax, has frustrated some residents who say liberal political leaders and their tax-friendly allies are treading on the will of Anchorage voters and the city’s charter.

“I believe the charter, when it was amended, was put that way for a reason, so if you’re going to amend the charter to increase the tax cap, it’s a very difficult thing to do,” Eagle River resident Dan Page told the Assembly at a recent meeting. “I think that’s intentional. I don’t know how lawyers got involved ... but it’s disingenuous at the very least.”

Assembly Chair Felix Rivera, a sponsor of an alcohol tax proposal that includes the one-time amendment, said there’s nothing wrong with asking voters to endorse a simple majority on a sales tax.

“I don’t think it goes against the will of the people to say, ‘If you want to do 50% plus one, well, here’s your opportunity.’ Vote ‘yes’ or vote ‘no.’ That’s basically what we’re doing,” Rivera said.

The 60% approval requirement was imposed in 1997 after a group called Citizens Against Sales Taxes got a proposal on the ballot to increase the vote threshold for a sales tax. It was led by Kevin Bruce, who previously worked for Gov. Bill Sheffield and later was deputy director of the Port of Anchorage.

The group eventually got 7,260 certified signatures, 349 more than it needed to put the proposal before voters.

At the time, the petition was opposed by the Anchorage Chamber of Commerce and then-Mayor Rick Mystrom. Mystrom argued that if a tax supported by 59% of voters fails because of the high threshold, the policy is empowering the 41% who voted against it rather than the majority of the electorate.

The business community was split on the proposal, with the bar, restaurant and liquor industry backing the idea.

Ironically, in the 1997 election, Bruce’s petition was supported by 57% of voters, not exceeding the 60% threshold it preached.

Before it passed, the proposition was challenged in court by the Municipality of Anchorage. Superior Court Judge Rene Gonzalez in 1996 struck down a portion of the proposition that would have required 60% voter approval to repeal the 60% threshold. That, Gonzalez ruled, was unconstitutional.

However, raising the barrier to pass a sales tax is legal, Gonzalez ruled.

That ruling also allowed the municipality to ask voters for a one-time charter amendment to avoid the 60% threshold.

The arguments for and against the 60% threshold were the same in the ’90s as they are today. The liquor industry remains opposed to the idea of a simple majority passing a sales tax, and in particular an alcohol sales tax.

“If the alcohol tax, or any tax, is a good idea, why do they need to make it easier to pass it?” said Darwin Biwer, owner of downtown bar Darwin’s Theory and president of the Cook Inlet affiliate of Alaska’s main alcohol trade group, the Cabaret Hotel Restaurant and Retailers Association.

“It’s a trick by the sponsors to make it easier to pass the tax, and it’s just not the way it should be,” Biwer said.

On Jan. 28, the Anchorage Assembly will vote on three tax proposals: two on alcohol sales and a broad-based sales tax. All are asking for the one-time charter amendment to avoid the 60% threshold. Several Assembly members have said they will likely only approve one proposal, and they might combine elements of all three into a single tax proposal.

Weddleton said the 60% threshold makes it extremely difficult to pass a sales tax, but he believes Assembly members should respect the charter. Circumventing that clause has led to voter distrust.

“Even if it’s legal … it doesn’t mean it’s right," Weddleton said. “I think the perception is there’s no constraints — we don’t even need to follow the charter.”

Weddleton is a sponsor of one of the alcohol taxes. His co-sponsor, Meg Zaletel, amended the proposal to allow passage by a simple majority. Weddleton understands the move but thinks it’s the wrong solution.

Regardless of the year or the tax, critics will remain.

“People are just sick and tired of the Assembly trying to get these taxes,” Biwer said.