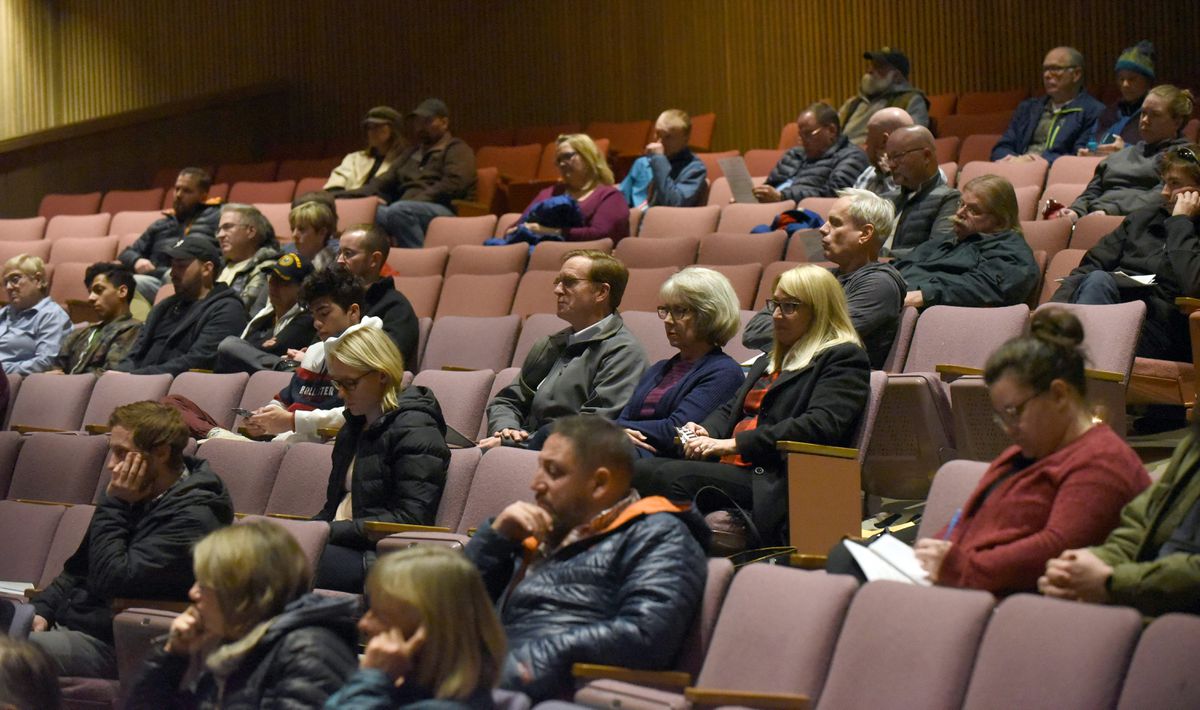 Most in attendance shared the opinions that Dunleavy should hold the line on state spending, ensure the government pays a “full” Permanent Fund dividend, and continue working to restrict abortion and protect gun rights.

The meeting came as Dunleavy faces a recall attempt by opponents who argue he is incompetent and unfit for office. But if folks in the auditorium thought the first-term governor was incompetent, they weren’t saying so.

“If there’s a petition out there for a counter-recall, I’d like to sign it,” said David Vesper, who told Dunleavy he was there to urge the governor to support a father’s rights bill and to oppose a bill that would make it easier to remove guns from those accused of domestic violence.

Others spoke up about a range of topics, but most echoed themes Dunleavy campaigned on.

“A full PFD is what we want and all the back payments paid in full,” said Dave Maxwell, who drove from Palmer for the event, the first of what Dunleavy has promised will be a series of meetings around the state.

Maxwell urged the governor to cut the state’s budget rather than imposing new taxes or tapping the fund.

“You could cut it by one-third and most wouldn’t even notice,” he said.

Wasilla’s Aaron Huhta said he thinks the state’s easiest path to prosperity is through cuts to regulations on small-business owners.

“How about getting out of the way of business?” Huhta said.

Dunleavy’s stated purpose for holding the town hall meetings is to get suggestions from Alaskans on closing the state’s fiscal gap. A pair of meetings scheduled earlier this month in Wrangell and Petersburg were canceled due to weather.

Peter Roberts told Dunleavy he thinks revenue could be gained by changing the state’s laws on charitable gaming so that gambling revenues are recouped by the state and municipalities rather than nonprofits.

“Instead of gaming regulators, operators and nonprofits deciding on how to spend this money, shouldn’t we the people and our elected officials decide?” asked Roberts, who said local municipalities only received 5.6% of the $35.2 million in net proceeds (after payment of prizes and expenses) generated by the estimated $376 million spent on gambling in Alaska in 2018.

One Dunleavy opponent who spoke up was Derek Reed, an Anchorage teacher who before the meeting helped gather signatures for the Recall Dunleavy effort. Reed told the governor he doesn’t support any budget that cuts funding for education in Alaska.

“We need education reform and it starts with teacher staffing,” said Reed.

Jonathon Hazelton also grabbed one of the two microphones circulating in the audience to criticize the governor’s lack of vision, saying a proposal to give out vouchers to purchase state land in lieu of Permanent Fund dividends doesn’t go far enough to raise new revenues.

“Where are the creative solutions?” Hazelton asked.

Dunleavy disagreed with Hazelton’s assertion, saying there are no options he hasn’t considered.

“We’re looking at everything.”

A handful of people gathered outside the auditorium before the meeting to try and gather signatures for the recall. While Reed said he believes having a dialogue is important, Dunleavy needs to go because the governor hasn’t listened to regular Alaskans.

“Many people tried to work with the governor, there was an outcry of public opinion, there was an outcry from all sides of the spectrum and all of Alaskans and yet he still said no, he still went to closed-door meetings,” Reed said. “The constitution allows for something like this as a means when someone breaks the law, when someone violates the constitution in many ways as well, which is part of our grounds for recall.”

“He’s playing politics and trying to buy voters by giving them these huge dividends that should be used to provide services for our state,” said Corral, who gathered signatures alongside fellow Eagle River residents Donna Steinfort and Bev Lewanski.

Steinfort said that although she’s against the governor, she and her fellow recall supporters have no ill will toward his supporters.

“Everyone has the right to their own opinion," she said.

After the meeting, Dunleavy said he was happy with the outcome and support he received. He said his office also plans to look at surveys it circulated at the meeting that ask for suggestions.

“We’re looking for as much feedback as we can from Alaskans because it’s going to be Alaskans we make the decisions for and the solutions for,” he said.

Dunleavy has yet to announce future meetings but said more dates and locations will be coming soon. As for what he took away from the event, he said he was encouraged by people’s willingness to speak out.

After the meeting, Dunleavy supporter Loy Thurman said he believes the governor is under attack from those who want to use the Permanent Fund dividend to fund social programs that aren’t needed.

“They’re stealing our PFD to spend on government programs so they can buy elections,” said Thurman, who attended the meeting in a bright red “Make America Great Again” hat in support of President Donald Trump.

Both Dunleavy and Trump won the Chugiak-Eagle River and Mat-Su areas north of Anchorage by wide margins, and Thurman said he believes the recall effort is similar to Trump’s impeachment in that those who disagree with the results of an election now want to see it reversed.

“He’s in the same situation Trump’s in.”

Two people who were able to come to a consensus after the meeting were Eagle River’s David Vesper and Donna Steinfort. Though they consider themselves ideologically opposite, the two neighbors -- one a recall supporter, one a Dunleavy backer -- stood chatting amiably in the aisles of the auditorium as the crowd filtered out. Both agreed they hold no ill will toward each other despite their political differences.

“We can agree to disagree amiably,” Steinfort said.

“The great thing is we’re having a civil conversation."

Correction: A previous version of this story misspelled Donna Steinfort’s last name, incorrectly attributed Corral’s quote to Lewanski and incorrectly reported the amount of money from charitable gaming that went to local municipalities in 2018.