Some Anchorage restaurants are trying to adapt to new restrictions due to COVID-19. But it’s still a struggle. 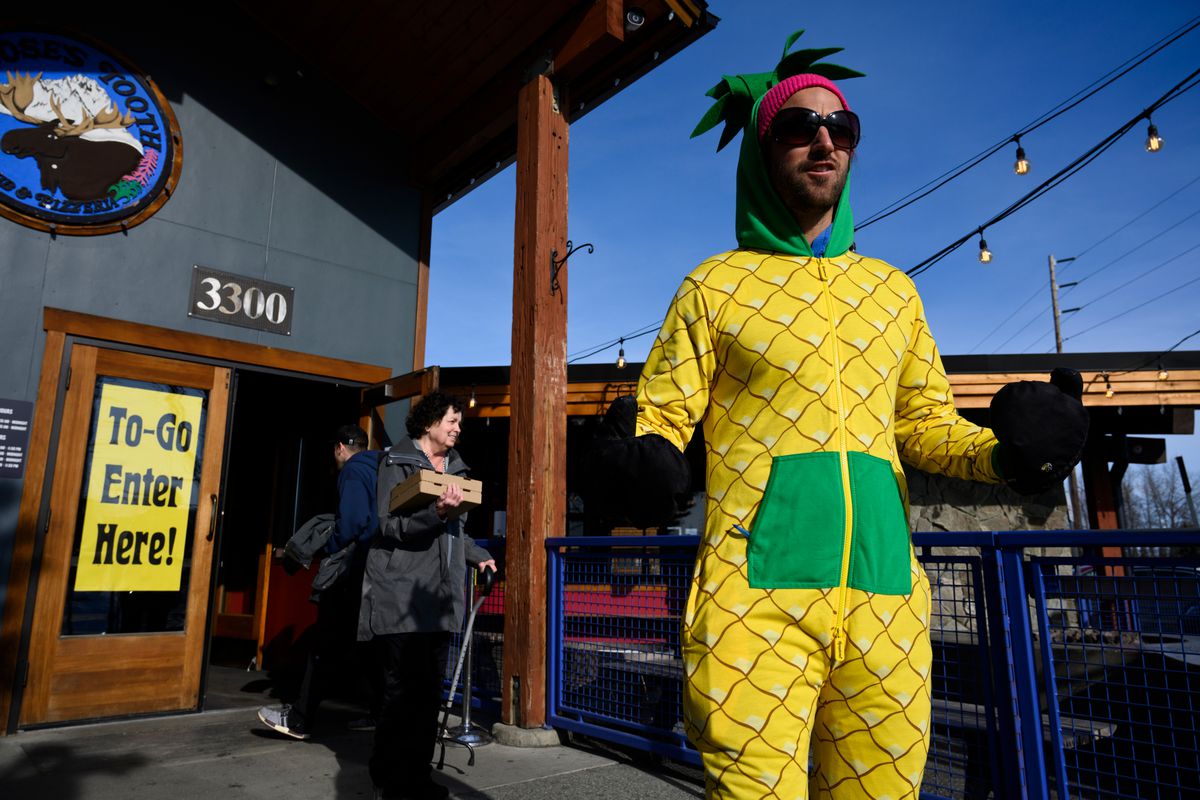 Moose’s Tooth bartender Josh Bleznak wears a pineapple costume and works as a doorman at the Midtown Anchorage restaurant on Friday, March 20, 2020. Bleznak’s job is to keep the flow customers picking up orders to five at a time inside the restaruant. He also said he hopes to make people smile. “Let’s have people enjoy themselves in a time that kind of sucks,” Bleznak said. (Marc Lester / ADN)

Moose’s Tooth bartender Josh Bleznak wears a pineapple costume and works as a doorman at the Midtown Anchorage restaurant on Friday, March 20, 2020. Bleznak’s job is to keep the flow customers picking up orders to five at a time inside the restaruant. He also said he hopes to make people smile. “Let’s have people enjoy themselves in a time that kind of sucks,” Bleznak said. (Marc Lester / ADN)

More than a week in to takeout-and-delivery-only regulations for Anchorage restaurants, some places have reworked their menus in an attempt to stay afloat until they can open back up. They’re trying family-style to-go meals and sanitary ways for customers to pay for and pick up food and drinks.

But others have closed down, at least until the virus runs its course. Many that remain open are struggling mightily.

“We are not going be able to make it like this,” said PHOnatik Vietnamese Cuisine and Lounge owner Tony Chheum.

Chheum said his business is down about 90%, but he’s staying open to keep his staff employed. He knows his problems aren’t unique. The industry citywide is hurting, and workers are struggling to pay bills.

How hard the industry is hit depends on how long the dine-in closure lasts, and how much government assistance is funneled to the food and beverage industry, Popp said.

“Cash is a real problem for most businesses in Anchorage right now, but the restaurant industry is really feeling the sharp effects," he said.

Anchorage restaurateur Laile Fairbairn said it’s easier for smaller restaurants to be more nimble in this situation, but everyone is still having a hard time. She is a partner in Locally Grown Properties, which owns restaurants like Crush Wine Bistro, Snow City Café, South Restaurant and Coffeehouse and Spenard Roadhouse.

[As jobless claims in Alaska soar, economists say tens of thousands of workers could be affected]

“It’s really hard to completely change your operation, and ensure the safety of your staff and the community,” Fairbairn said. “There’s all sorts of creative things that are happening, but some places are just straight-up closing.”

Crush pivoted to “take-and-bake” meals: a full meal for four, prepared and ready to be baked at home. That has been popular, Fairbairn said. At South, there’s a cold deli counter with grilled meats and veggies for people to take home and heat up.

Fairbairn said she’s trying her best in a tough situation, but there’s a reason Crush isn’t normally a take-and-bake restaurant. She’s bringing in a quarter to 50% of the business she would otherwise.

Fairbairn recently laid off 223 people — 75% of her staff — and is working to give the remaining workers as many hours as possible. The layoffs were largely so staff could get unemployment, she said, and she hopes to hire them back when they open back up.

The hardship is felt citywide. After trying to make takeout work, Rustic Goat announced Monday it would close during the dine-in ban. Coffee shops like SteamDot and Kaladi Brothers Coffee did the same.

Sales fell by about 90% after the city shut down dine-in service for food and drinks on March 16, SteamDot owner Jonathan White said.

The closures put 65 employees temporarily out of work, but White said he plans to keep paying them for as long as possible. A small crew continues to work in a warehouse preparing and selling wholesale coffee to large stores like Costco.

“This is just gut-wrenching,” White said. “I’ve been trying to find a way to keep everyone employed, because I know how challenging it will be for them given what’s already happening out there.”

Others closures might not be far behind, but Popp said it’s impossible to predict how many will close. He’s hoping a new federal stimulus package will provide relief.

Pida Hastanand, owner of So Thai in Spenard, has managed to stay open. She said her takeout customers are largely those who supported her before the dine-in closures, and they’re happy she’s still open.

But her employees that used to get six days of work per week are now getting three or four.

“I know it’s going slow, but better than if we close,” she said.

In Eagle River, Pizza Man continues doing business, albeit at a much slower clip. Waitress Tania Shipman said delivery is still busy, but pick-up orders have been slow.

“It’s not much of a comparison,” she said. “Pizza Man is a very, very busy restaurant. We’re used to it being packed, the phone ringing off the hook. It’s pretty drastic.”

While businesses have to move to a takeout model, they also have to change how they interact with customers, even if it’s for mere seconds.

Fletcher is also using different doorways for an entrance and exit to limit what surfaces people touch. Employees are wearing gloves, and there are lines of tape on the floor to keep customers from coming within 6 feet of each other.

Some Anchorage restaurants, like Kriner’s Diner, have leaned on the time-tested method of the deal.

Owner Andy Kriner said his weekly deal has worked, to an extent.

Last week it was a roll of toilet paper with each order (he went through about 250), and this week it’s a $2 burger. On Tuesday he said he’d have to start using a slightly bigger burger patty, so he was going to up the price to $2.50.

Kriner said people thought the toilet paper was a “riot” and the burgers have been popular. On Monday, he sold 450 in two hours between his diner and his other restaurant, Kriner’s Burgers & Pies.

“I think I am doing pretty good actually," he said. "Not doing what we usually do, but I can hold my own.”

Still, he said, he had to lay off a couple dishwashers after dine-in service was shut down.

The burger deal is fairly basic — beef, lettuce, mayonnaise and pickles — but people add other ingredients and get fries.