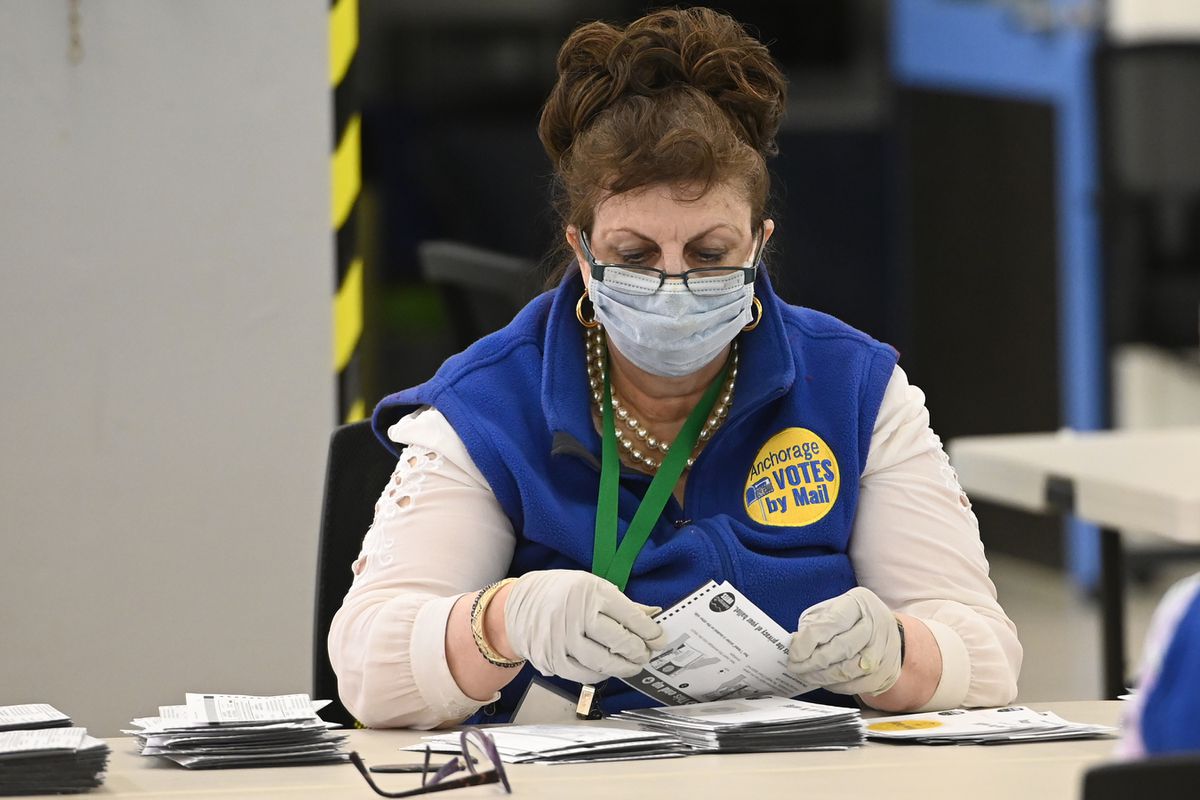 Initial results from Anchorage’s spring election show Assembly incumbents holding leads in each race, although a couple races are within reach for challengers.

A proposal to impose a 5% tax on alcohol also has more supporters than detractors, according to the initial election results, though the margin is slim: About 1,500 more voters support the tax than oppose it so far.

The Anchorage Election Center received 58,712 ballot envelopes by 8 p.m. Tuesday. Anchorage Clerk Barbara Jones said 75% of those were processed and made up the initial election results. The overall turnout rate so far is 19.45%, but that will increase.

Ballots picked up from drop boxes and accessible vote centers at 8 p.m. Tuesday will begin to be processed Wednesday, and mailed ballots are still coming in. Jones said election officials expect to work all day Wednesday and Thursday, plus part of Friday, processing the remainder of the ballots.

Early results show strong support for an $83 million school bond and adding a 12th member to the Assembly. On-site consumption of marijuana was resoundingly rejected.

Assemblyman Felix Rivera is narrowly ahead in the closest Assembly race. He leads the District 4 race for Midtown over challenger Christine Hill, 3,437 to 3,346.

Assemblywoman Suzanne LaFrance is in the second-closest race. She has 5,329 votes in the initial results for South Anchorage’s District 6, while challenger Rick Castillo has 4,949.

Jamie Allard appears poised to be the newest member of the Assembly. She’s running for the District 2 seat representing Eagle River/Chugiak, and led her opponents with 3,943 votes in the initial run. Stephany Jeffers is second with 2,179 and Roger Branson is in third with 495. The seat is being vacated by Assemblyman Fred Dyson.

Assemblyman Pete Petersen looks like he will retain the title of longest-serving member of the body as he leads challenger Monty Dyson 3,765 to 2,435 for District 5, representing East Anchorage.

The Anchorage Assembly in January voted to send an alcohol tax proposal to voters. It was a rebooted version of a proposal that failed in 2019. So far, voters in favor have a slight majority. Early results show 22,750 supporting the tax and 21,203 against it.

Two seats were up for election on the Anchorage School Board, and early numbers favor both incumbents.

The Anchorage School District bond has received 25,895 votes in favor and 18,839 against.

Anchorage voters came out against on-site consumption of marijuana, with 15,786 votes in favor and 28,409 against.

If the initial election results hold through to the final count, the Anchorage Assembly will also add a 12th member, as Proposition 12 approval is leading by 7,805 votes.

Tuesday night’s numbers are not final. They are the result of seven days of processing by election officials, with several more days to come.

On Tuesday, election officials bustled around the Election Center on Ship Creek Avenue, working to compensate for the temporary workers who decided to stay home due to the spreading coronavirus.

With eight to 10 workers gone from the center, they were down about a third of their normal staff, Jones said.

“Most everybody is doing multiple tasks,” said Bonnie Jack, who has been working temporarily as an election official for decades.

The workers aren’t allowed to stay late each night to compensate for the smaller staff. Jones doesn’t want election officials working during hours the public isn’t aware of.

“We have to work as a team. We're very lean this year,” Jack said. “Nobody stands around.”

Jack said everyone is conscientious of staying 6 feet from one another as best they can. Some people on Tuesday wore masks, and everyone wore gloves.

It’s a new practice, but it has an upside: In addition to potentially protecting against the virus, Jack said this year, she hasn’t gotten any papercuts.

Karen Ingraham leads the drop box pickup team, which has half the number of workers this election. Her staff works in teams of two. They have to ride together in a car because drop-box workers can never be alone with the envelopes, but Ingraham said they try to stay 6 feet apart, and she’s taking every precaution she can.

When they get back with a new batch of envelopes, she sprays the workers’ pickup bags and vests with Lysol to disinfect them.

Ingraham continues to battle unpredictability. As new workers are recruited, others drop out, including one on Tuesday.

“Those that have continued to work have the enthusiasm they’ve had every year,” she said. “They want to make this work, and we are making it work. They’ve just been fantastic.”