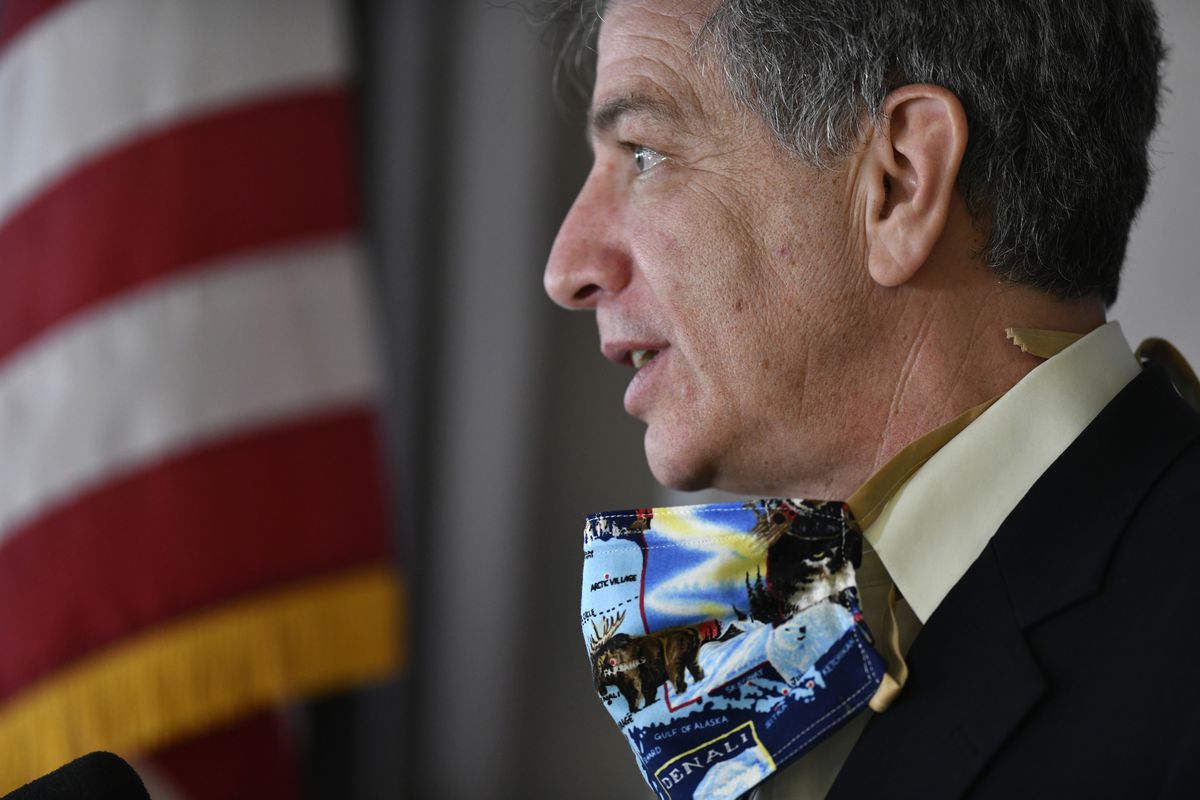 Anchorage Mayor Ethan Berkowitz speaks at a briefing on the coronavirus situation from the Office of Emergency Managment building on April 8, 2020. (Marc Lester / ADN)

Anchorage Mayor Ethan Berkowitz speaks at a briefing on the coronavirus situation from the Office of Emergency Managment building on April 8, 2020. (Marc Lester / ADN)

Anchorage Mayor Ethan Berkowitz on Friday asked the Assembly to extend his emergency powers to deal with the COVID-19 outbreak until Nov. 15.

That doesn’t mean specific uses of that power to date, like the “hunker down" order, will be extended for that period of time, according to the city’s top attorney.

Earlier on Friday during a media briefing, Berkowitz said the “hunker down” order would likely be extended to early May. The current order expires Tuesday.

Several Assembly members said during a Friday work session that they thought a seven-month extension of the mayor’s emergency powers might be too long.

“It’s not really clear to me why Nov. 15,” said Assemblywoman Austin Quinn-Davidson. “I feel really uncomfortable just moving forward without having more content about why we would be doing it for that length of time.”

Having a longer period of emergency powers — rather than two- or four-week increments — gives the administration a better ability to plan, said Assemblyman Chris Constant.

Also, it’s the period of time the Alaska Legislature gave Gov. Mike Dunleavy. Jason Bockenstedt, chief of staff for Berkowitz, said they picked Nov. 15 to be consistent with the state, hopefully making dual emergency orders from the state and the city less confusing for Anchorage residents.

Assemblyman Felix Rivera said during the meeting he reached out to a state representative to get more information on why the Legislature picked Nov. 15. Rivera declined to say which representative he was talking to.

Rivera said he was told the Legislature picked the November date for two reasons. Dunleavy and Chief Medical Officer Dr. Anne Zink expect an additional rise in coronavirus cases, and because the Legislature convenes far less often than the Anchorage Assembly, which has been meeting on a near-weekly basis during the pandemic.

“If we had the ability to convene as quickly as you all, we wouldn’t go to November,” Rivera said, paraphrasing the representative.

Municipal Attorney Kate Vogel said that during an emergency period, the mayor has the ability to spend money quickly and more freely.

If the Assembly were to extend the declaration to November, it could at any point call an emergency meeting and undo an emergency order, or amend one. Vogel said that because the Assembly is more nimble, it has much more power during this period than the Legislature, which is much harder to convene.

Rivera said while he does agree that the administration should not be operating on a two-week timeline, seven months seems too long.

“If there’s some sort of sweet spot in between November and today, I think that makes more sense,” he said.

Since March 12, Berkowitz has used his emergency powers to issue four orders. The most impactful one has been the “hunker down” order, which requires nonessential businesses to close and for people to stay at home unless they are doing something exempt from the order, like grocery shopping or hiking.

[Heading outdoors? Here’s what Alaskans should consider during the coronavirus pandemic.]

The Assembly also asked the Berkowitz administration about how an emergency order extension through the fall could affect municipal employees. Economic and Community Development Director Chris Schutte said many municipal employees have been repurposed to help with the city’s emergency response.

“We are finding there is a need for bodies like you wouldn’t believe," he said.

But Schutte also said that won’t last forever. He said some departments are planning out to the summer on how to adjust operations, staffing and budget.

“I would like to reassure the Assembly that we are not living in the dark, and not planning for the many different futures that we could see in one month, two months or three months,” Schutte said.

When asked for clarification, Schutte said there is no plan to lay employees off in the short-term, although he said the city is not hiring for vacant positions.