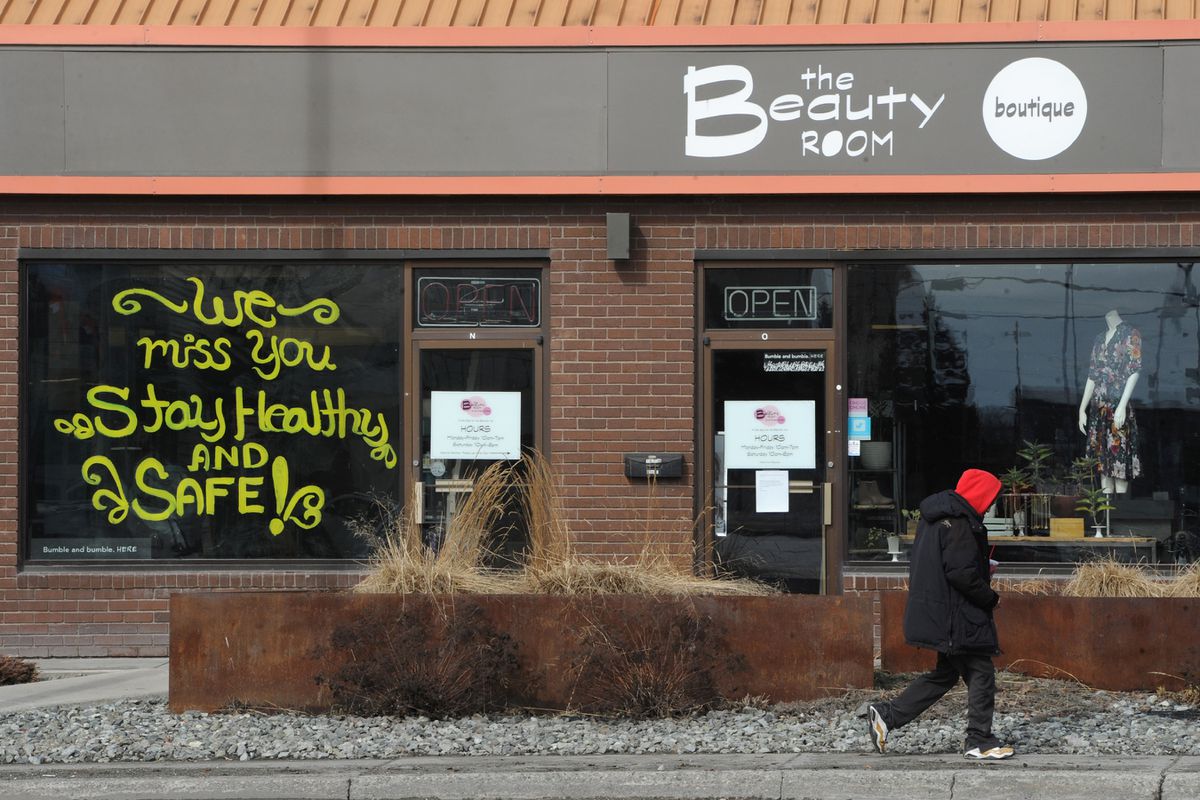 A pedestrian walks past the Beauty Room day spa & beauty boutique on Northern Lights Boulevard with a note to customers while the business remained closed on Monday, April 13, 2020, during the COVID-19 pandemic. (Bill Roth / ADN)

A pedestrian walks past the Beauty Room day spa & beauty boutique on Northern Lights Boulevard with a note to customers while the business remained closed on Monday, April 13, 2020, during the COVID-19 pandemic. (Bill Roth / ADN)

On the eve of the expiration of the city’s “hunker down” order, Mayor Ethan Berkowitz on Monday laid out a list of criteria for what must happen before Anchorage can go back to normal. That included a slower transmission rate, more testing and more access to personal protective equipment for health workers.

Alaska’s urban hub is not on the verge of meeting all of those criteria. While the “hunker down” order would expire Tuesday if left untouched, it’s almost certain that won’t happen. Berkowitz has repeatedly said he will extend the order, which requires many Anchorage businesses to remain closed, but he has not said until when.

“For the economy, we are not flipping this switch on a set date,” Berkowitz said Monday during a community briefing. “We are going to ease off on what the restrictions are. We are going to be very mindful, because the lessons of history are absolutely clear.”

But from local to the national level, there are growing calls to reopen the economy. On Monday, President Donald Trump discussed the dangers of easing restrictions versus the dangers of further damaging the economy. And Anchorage Assembly members report they are hearing from many constituents who are hurting economically and want the “hunker down” order to end as soon as possible.

During a Monday evening briefing, Alaska Gov. Mike Dunleavy said he and his team will talk this week about opening up sectors of the Alaska economy as soon as early next week, if cases stay on their current trajectory. If there is a spike in cases in connection with opening things up, the state might tighten regulations again, he said. The governor didn’t say what sectors could be opened first.

Dunleavy said some communities could see health mandates eased more quickly than others, based on how vulnerable they are to the virus and what the transmission rate is in a specific area.

“We’re talking about not just opening businesses, but trying to get Alaska back to a normal life,” Dunleavy said.

Even if Dunleavy eases regulations on the state level, people and businesses in Anchorage are bound by local measures.

One of the criteria for easing public health mandates for Anchorage, Berkowitz said, is a slower transmission rate. That rate, referred to as the R0 (pronounced “R naught"), is between 1.3 and 1.7 in Anchorage. Berkowitz said it needs to get closer to 1.0.

Berkowitz said he wants more testing, both for the virus and the antibodies, as well as better capability to trace the past whereabouts of people with the virus before opening up businesses.

Medical professionals need to have greater access to personal protective equipment like masks, gowns and face shields, the mayor said. He also said the city needs more medical infrastructure. Berkowitz said at some point he’d also like to see a treatment for the virus, or a vaccine.

“You have to solve the public health problem before you can fix the economic problem,” Berkowitz said.

In a video update Sunday, Dr. Anne Zink, the state’s chief medical officer, said Alaska’s “curve” has been flattened because of steps like the “hunker down” order and the governor’s shelter-in-place order. That success came at a significant price, she said.

Zink said state officials are also thinking about a path forward. Access to medical gear and infrastructure has increased in the past few weeks, she said, and health experts are closer to finding a treatment and cure for the coronavirus.

During past public health crises, those who have pulled back too early killed more people and took longer to recover economically, Berkowitz said.

Rep. Sarah Vance, R-Homer, said she’s noticed people getting increasingly agitated over the shelter-in-place order, and that agitation spiked within the past week. Vance said people are at a breaking point, and are threatening to violate the mandate.

“People are saying, ‘When are we going to get back to work? Enough’s enough,’” Vance said.

Vance was pleased to hear Dunleavy talk about opening up the economy on Monday.

Vance said businesses can operate safely, and should be afforded the chance to pitch the government on how they would do so, rather than the state deeming which sectors get to open first.

Starting Monday morning, Anchorage Assembly members reported a barrage of emails from constituents frustrated with the “hunker down” order. They were getting about one email per minute, several said.

Assemblywoman Austin Quinn-Davidson created an auto-reply because they were coming in so quickly. About 80% were calling for restrictions to be eased, she said. Assemblywoman Meg Zaletel said it was the largest influx of emails she’s received in her year on the body.

“We received a lot of emails, the vast majority of which ask us not to extend the mayor’s emergency powers to Nov. 15,” Dunbar said. “The emails run the gamut, from folks genuinely concerned about the economic effects, to folks making fairly wild and partisan claims about the mayor.”

Sen. Lisa Murkowski joined Berkowitz on the Monday media call. She said she understands the frustration some Alaskans are feeling, but praised the mayor and said the public needs to listen to health care professionals. While some places are seeing cases go down, Alaska is seeing an increase in cases, she said.

“I, too, worry that we may try to say it’s all clear too quickly, and we see a resurgence of the virus, which would just set us back on our heels even more," Murkowski said.