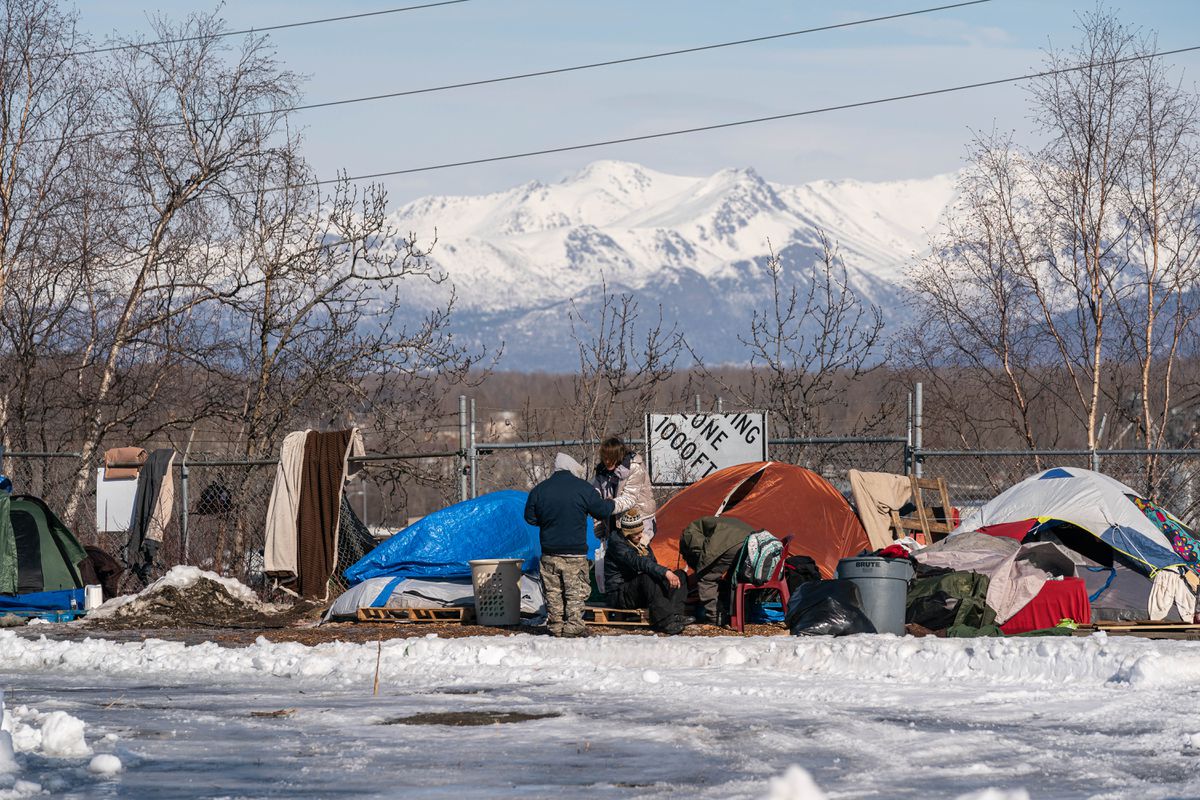 A homeless camp is set up along a fence in a vacant lot on 3rd Avenue in downtown Anchorage on Wednesday, April 8, 2020. (Loren Holmes / ADN)

A homeless camp is set up along a fence in a vacant lot on 3rd Avenue in downtown Anchorage on Wednesday, April 8, 2020. (Loren Holmes / ADN)

Anchorage officials have requested the Alaska National Guard’s help to clean up the city’s homeless camps as the snow melts and the coronavirus pandemic continues. The city’s camp abatement process is set to resume on May 1.

At a work session of the Anchorage Assembly on Monday, the city’s housing and homeless services coordinator, Nancy Burke, outlined how the federal CARES Act appropriated $1.4 billion for National Guard deployments to support states and local governments in responding to coronavirus. If approved by Gov. Mike Dunleavy, National Guard soldiers could assist city Parks and Recreation staff in cleaning up trash and human waste in the city’s urban camps.

The help would be timely since many city employees and homeless outreach workers are hunkered down or redeployed because of the coronavirus. The police would still abate the camps after issuing adequate notice but the National Guard could assist with cleanup, Burke said.

Assembly member Forrest Dunbar urged caution. The East Anchorage representative said if the plan is to have “uniformed soldiers breaking down tents and throwing them into dumpsters I think the administration might want to reconsider that or think hard very hard before we go down that road.”

Chris Constant, who represents Downtown Anchorage on the Assembly, said he’s not advocating or opposed to using the National Guard. But he said he had neighbors in South Addition more than a year ago “begging me for the National Guard come in and clean up the camps.”

An estimated 1,100 people are homeless in Anchorage with many thousands more living in cars, couch surfing or in marginal housing. The unsheltered, many of whom have mental health and substance abuse disorders, appear more visible now that most businesses and public buildings are closed, traffic is light and major streets are largely devoid of other pedestrians.

Like other Anchorage residents, the homeless have had their routines disrupted by the pandemic. The city’s main shelter, Brother Francis, closed to most clients last month other than the most elderly and frail. Nearby Bean’s Café, a soup kitchen and overflow shelter, also closed. But Bean’s staff are operating a mass shelter at the Sullivan and Ben Boeke arenas for up to 480 clients. Some 360 slept there on Sunday night and more than a thousand have accessed meals over the past three weeks, said Lisa Sauder, Beans Café executive director.

As the shelter situation has changed, a large, illegal camp on the corner of 3rd Avenue and Ingra Street near Brother Francis has mushroomed and others have sprung up in Chester Creek greenbelt near the arenas, said Constant.

“We have mobs of people rolling around at will, violating people’s property, and causing harm,” Constant said.

Robert Cupples, who owns short-term rentals in the area, is among those who feel completely fed up.

“The city has a plan for those members of the homeless community who are willing to play nice and comply and engage in shelter. But they have zero action plans for the portion of the population that will not. And that is unacceptable,” said Cupples.

Cupples said many of his neighbors on Third Avenue share his frustration, including Wadeen Hepworth.

“Allowing the tents to remain and the people to assemble presents a dangerous health and security issue and I’m furious the city is allowing it to exist,” Hepworth said.

The city has hired two security companies to monitor the inside and the perimeter of the Sullivan and Ben Boeke. The nonprofit Anchorage Downtown Partnership is contracted to patrol neighborhoods near the arena to reduce disruption to business owners and residents.

The job has been challenging, according to Amanda Moser, executive director of the Downtown Partnership.

Her staff is seeing large groups of unsheltered homeless and they have felt outnumbered.

“It’s a little bit rougher than it has been in the past. What I’m hearing from my team is that they are encountering 30 to 40 folks each day. Folks are in groups of seven to 10 in front of businesses and in doorways. We patrol in groups of two. We are patrolling on opposite sides of the street to make sure that we are following all directives from the state and local government,” Moser said.

The need for social distancing and hunkering down is making homeless outreach particularly difficult.

“We just don’t have the workforce at the moment,” said Burke.

But the city has set up two “community resource hubs” outside the Sullivan and Ben Boeke where the homeless can connect with case management services and apply for housing assistance, and it plans to set up more in other parts of the city.

Sauder said her nonprofit is also requesting National Guard services to help with the assembly and distribution of food boxes at its feeding sites, both at the arenas and at three locations where The Children’s Lunchbox is operating.

“We could use their skills with logistics,” she said.

Meanwhile, the state of Alaska is preparing a temporary quarantine and isolation program for certain homeless people using hotels, college and university dormitories, and non-traditional structures. The program, outlined Monday, will allow the state to access funding from FEMA, said health and social services commissioner Adam Crum. Those who could access the quarantine and isolation quarters include homeless individuals who need it as well as homeless families, with at least one member who tested positive for COVID-19, who live in congregate shelters and will require isolation.

First responders and healthcare workers who need to quarantine safely without exposing their families could also use the facilities.