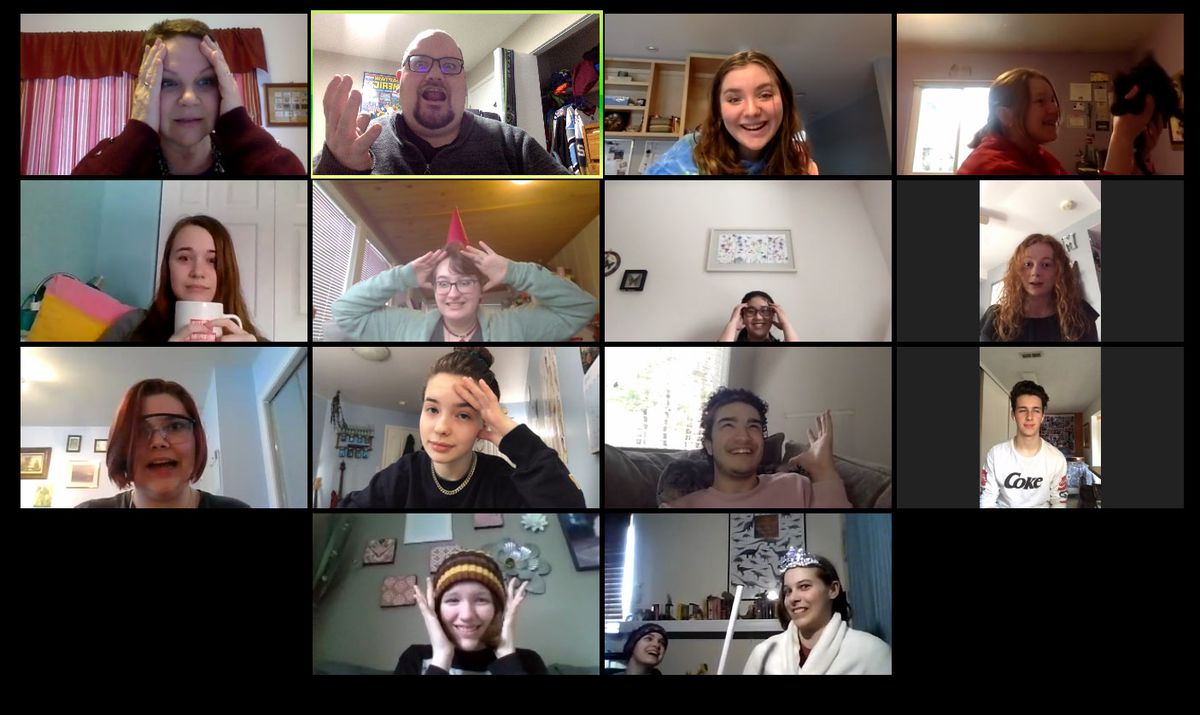 Dimond High School theater students and directors have a moment of "Covid Panic" while working on their spring production. (Zoom screenshot)

Dimond High School theater students and directors have a moment of "Covid Panic" while working on their spring production. (Zoom screenshot)

The group isn’t gathered in the dim light of an auditorium. Instead, students sit at home behind computer screens and log in to a Zoom video conference call. Faces appear in the window one by one, and the meeting becomes a collage of smiles.

Aidan King, an affable 18-year-old with a mop of curly dark hair, leads the group of nine high school students through warmup exercises.

“Particularly the tip of the tongue, the roof of the mouth, the lips and the teeth,” King calls from his couch, rolling through the “rrrs.”

Carrie Smith, Dimond High School registrar and co-director of its after-school theater program, and Timothy Peters, co-director and social studies teacher, watch the students as they run through the script, occasionally stopping to give feedback.

It’s their third rehearsal. Smith, Peters and the students are practicing for something a little unusual — a virtual production that will replace their usual end-of-year performance.

On April 9, Alaska joined numerous other states nationwide that have ordered schools to remain closed through the end of the academic year in an effort to slow the spread of COVID-19. The school building closures have shuttered most after-school activities, like spring sports.

Smith and Peters are Dimond graduates and both participated in the school’s theater program as students. The co-directors would usually spend much of this semester leading about 50 students in rehearsals for the school’s largest production, “Dimond Night Live" — the high school’s spoof on “Saturday Night Live."

“DNL” won’t happen this year. But the co-directors felt that somehow, the show must go on.

“I just thought — especially with Aidan in mind — that we’ve got to do something for theater kids,” Smith said.

King spent all four years of high school dedicated to the after-school theater program, she said. Smith couldn’t let his senior year end without a final production. She also didn’t want King or any other student to lose the opportunity to earn a high school letter in theater.

So she reached out to the company the school usually purchases its plays from and found that it already had created a script that was adapted for virtual performance.

The script, “10 Ways to Survive a Quarantine” by Don Zolidis, is just what it sounds like — a tongue-in-cheek look at life under quarantine. Students will film themselves in their roles at home, reciting comedic monologues and occasionally bursting into song. The scenes detail scenarios like falling in love with inanimate objects and becoming a little too invested in the lives of squirrels outside windows.

Smith and two students will piece together the individual recordings into one edited video “performance” that will be shared during a live Zoom watch party with parents, staff and the theater group. The final video should be done in mid-May, Peters estimates.

When all 17 students logged in to the first Zoom rehearsal, “it was kind of that first-day-of-school moment when kids haven’t seen each other all summer," Peters said.

Smith’s goal for the rehearsals, or “zoomhearsals,” as she nicknamed them, is to keep theater as normal as possible.

“Allowing them to still be able to express themselves in any kind of creative way is extremely important for getting them through this,” Peters said. “It’s great emotionally for these kids and honestly, for me and Carrie as well.”

For King — who is going to a university in Oregon to study chemistry in the fall — the theater group has been an integral social and creative outlet.

“I absolutely love everyone in theater. It’s literally a family and I am the ‘mom’ of the group,” King said. “Now, instead of goodbyes in person, it’s going to be goodbyes in Zoom.”

It’s why Smith and Peters pushed to keep the theater group running. The rehearsals are a foothold on solid ground during an otherwise uncertain time.

“It gives us back a little bit of normalcy in our lives,” Peters said. “It’s just being able to interact with the kids, see the kids and try to put together something during this extremely crazy period of time.”