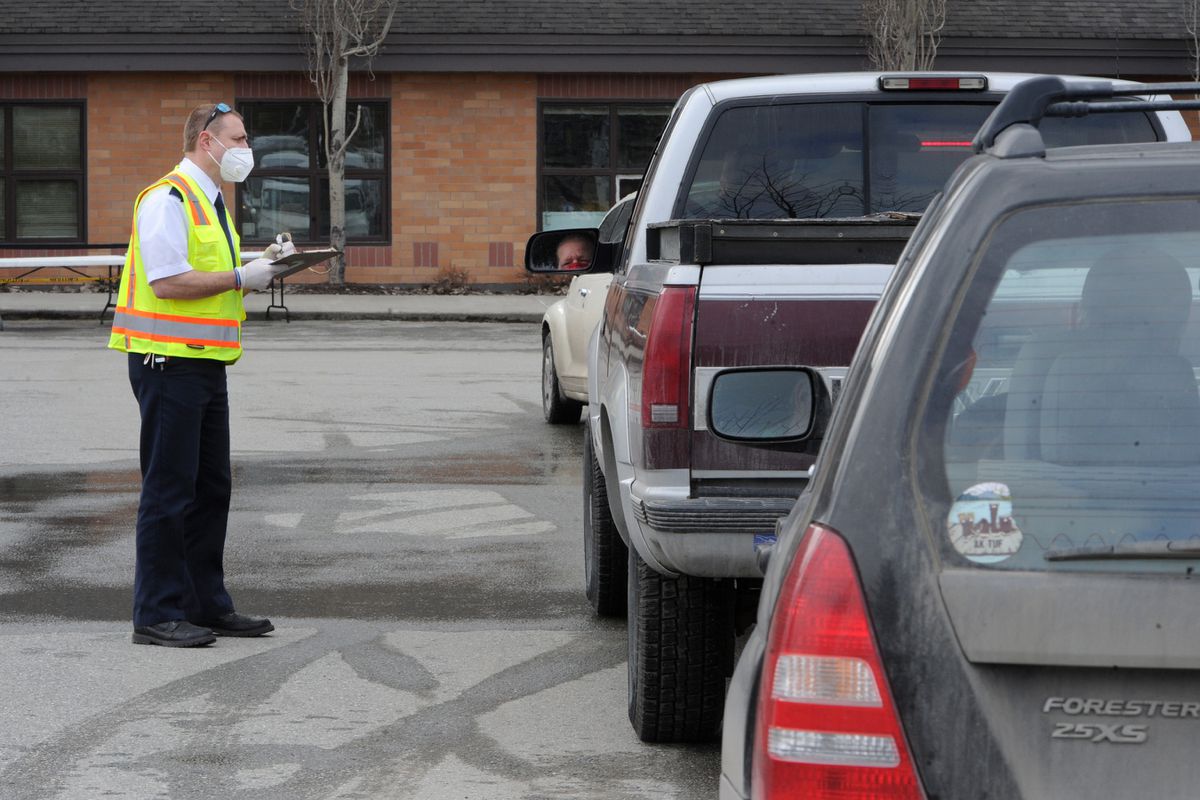 Michael Mott of The Salvation Army checks in people waiting in line at the drive-thru emergency food pantry at the McKinnell House on Wednesday, April 22, 2020. (Bill Roth / ADN)

Michael Mott of The Salvation Army checks in people waiting in line at the drive-thru emergency food pantry at the McKinnell House on Wednesday, April 22, 2020. (Bill Roth / ADN)

Food pantries across Alaska have been reporting a significant increase in demand as more Alaskans lose their jobs or have their hours cut due to COVID-19-related business closures.

Food Bank of Alaska CEO Jim Baldwin said his organization estimates that demand has increased by roughly 75%, but that’s anecdotal — there isn’t hard data to show exactly how many more people are relying on donated food.

But the increase in demand is undeniable, Baldwin said. He said the Food Bank of Alaska distributes food to about 150 partner organizations around the state, about half in Anchorage and the Matanuska-Susitna Borough. Those organizations are seeing unfamiliar faces who say they are in need due to layoffs, Baldwin said.

[More than 60,000 Alaskans have applied for jobless benefits as pandemic closures continue]

“They are hearing that,” he said. “They know their regular clientele, the folks they would be serving on a regular basis.”

Baldwin said so far, they have been able to meet that need.

“Right now, we are in a pretty good situation,” he said. "We have had a tremendous outpouring of support.”

About a month ago, he started sourcing more food from the Lower 48. In a normal year, the Food Bank of Alaska would receive about 1 million pounds of food from the federal government. So far in 2020, it has received 2 million pounds, and more is likely on the way, Baldwin said.

Normally, 25% to 30% of the organization’s food is purchased from the Lower 48, but right now it’s about half. That means more food needs to be shipped up.

Matson and TOTE Maritime both donate shipping container space to the food bank, and they have increased that capacity during the pandemic.

Tote’s increase went from one container per month to one or two per week. Each container holds about 43,000 pounds of food, according to Baldwin.

Baldwin said there is a little increase in competition to purchase food from the Lower 48, as food banks across the country are seeing a spike in demand. It forces him to plan ahead. He said the Food Bank of Alaska has about six weeks’ worth of food on hand, so to keep that buffer, he needs food coming in as quickly as it’s going out.

“The supply chain is still really good, but there is a strain on the system in the Lower 48,” he said. "They are not able to turn around and meet our orders like they would regularly.”

The food gathered locally is mostly donated from supermarkets and wholesalers, Baldwin said. That’s expected to continue through the summer, which is generally a busy part of the year as children are out of school and lose access to school meals.

[Donors asked to contribute $500,000 to feed children and families in Anchorage]

Baldwin said he’s tuning in to the daily public briefings from Anchorage Mayor Ethan Berkowitz and Gov. Mike Dunleavy. Both laid out plans this week to begin opening segments of the economy slowly.

That will help, Baldwin said, but it’s hard to predict the impact of a closed tourism season this summer.

“If we don’t have the funds and the resources come June, July, August, that’s where it’s going to be a little tight," he said. "The need will be there.”