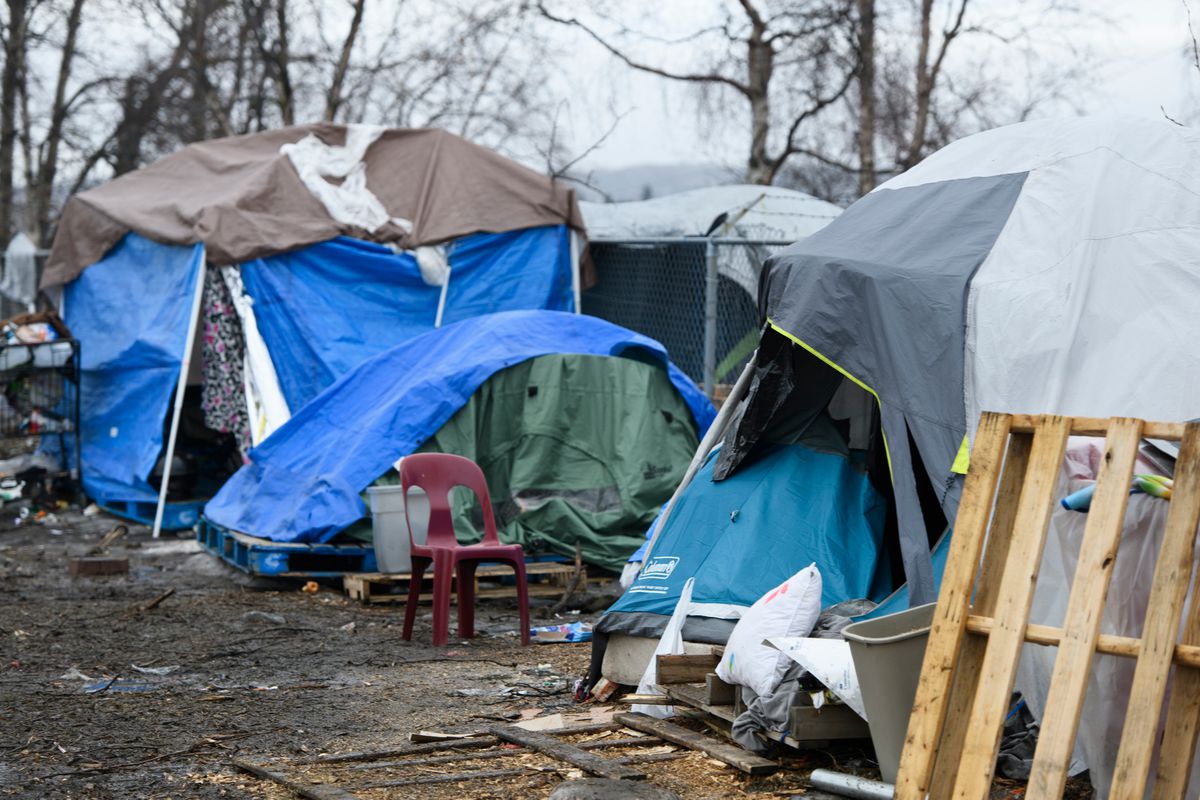 A group of Anchorage Assembly members is trying to push the Berkowitz administration to immediately deal with homeless camps.

Now that the city has more than enough shelter beds, and with increasing disturbances in neighborhoods around homeless camps and a public health emergency, the Assembly members believe it is high time the camps were cleared and services rendered to those in need.

The Assembly is scheduled to take up a resolution at its Tuesday meeting asking the Berkowitz administration to post notices on homeless camps informing occupants they need to vacate.

“It’s a pointed directive to get something done,” said Kennedy.

The city should abate the camps after adequate notice, have workers clean up the camps and perform outreach with campers to connect them with services, according to the resolution. Those services could include housing and rental assistance, and referrals for substance abuse, mental and behavioral health treatment, for example.

Whether the campers are provided a 72-hour or 10-day notice is a public safety call that’s up to the police, Zaletel said.

Homeless camps have been “persistently present” near the corner of Third Avenue and Ingra Street and along the Chester Creek greenbelt between Ingra Street and Arctic Boulevard. Other big camps have recently sprung up throughout the city, according to the resolution.

New camps are visible along Chester Creek near Sullivan and Ben Boeke arenas, which the city converted into mass shelters last month, capable of housing up to 480 people daily. A fire recently erupted at one of the camps.

Residents of neighborhoods close to homeless camps have reported a sharp uptick in disturbances since the COVID-19 public health emergency was declared, including drug use, excessive litter, violence and vandalism, according to the resolution.

On Sunday, Robert Cupples said he witnessed a car theft on Third Avenue outside the homeless camp on Ingra Street, on a vacant lot where the old Alaska Native Medical Center once stood. Cupples owns rental units and a family home that he is renovating on Third Avenue and Hyder Street, across the street from camp. He was doing yard work when he saw a woman park her minivan in front of the homeless camp and get out to distribute hamburgers to the campers.

“Within minutes a young white male walked from the camps, got in her minivan with a bicycle mounted to the back and drove away down 3rd Ave,” Cupples said.

After noticing her vehicle was gone, the woman asked Cupples if he had seen what happened. He told her what he witnessed. The minivan was later recovered a block and a half away in a back alley between Third and Fourth Avenue parked in the driveway, he said.

“This woman’s ‘reward’ for feeding the homeless was having all her belongings stolen,” Cupples said.

A preliminary police investigation of the incident found that the owner of the 2010 Honda Odyssey had parked the vehicle and left the keys inside, according to MJ Thim, police spokesman. No arrests were made.

John Tatham, a partner in PIP, a nearby marketing and print shop, said he deals with an average of ten gallons of trash at his business every day and “that’s not counting the human excrement.”

“Confrontations are common as these are not the classic homeless but able-bodied, young males high on who-knows-what. I worry about my employees’ safety. I foresee a tragic event,” Tatham said.

On April 16, an employee of Elaine S. Baker and Associates was alone in the upscale furniture story on East Fifth Avenue near Gambell Street when a large rock was hurled through the window, breaking two panes of glass, according to the company.

“It was the first time we have had someone in here doing inventory. I feel like I put this employee in danger,” said Carmen Baker, interior designer and co-owner. “It’s very disconcerting.”

Baker has had to beef up security since the “hunker down” order went into effect, she said. Like Tatham, she encounters people sleeping in her business doorways and deals with human feces on a daily basis. The situation has gotten out of hand, according to Baker.

WIth the new shelters at Sullivan and Ben Boeke, the city has an excess of shelter beds, according to the resolution.

There have consistently been over 100 vacant shelter beds open on any given night.

To abate the existing camps and move people to shelter, the Assembly members have proposed a $180,000 budget amendment along with the resolution.

“We’re not likely using May or June’s funds because they are covered by FEMA and we have mass shelters so we’re just moving those funds to support the very work that it was intended to do which is to get folks in shelter and to break down whatever barriers there are to getting into shelter,” said Zaletel.

The city expects to be reimbursed by FEMA for the cost of running the mass shelters at Sullivan and Ben Boeke. According to a March 19 contract with Bean’s Café, which is operating the shelters, Anchorage could pay up to $584,556 for sheltering up to 280 people, or up to $889,776 per month for up to 480 people. That includes meals, supplies, staffing and security.

Correction: Meg Zaletel’s last name was misspelled in the original version of this story.