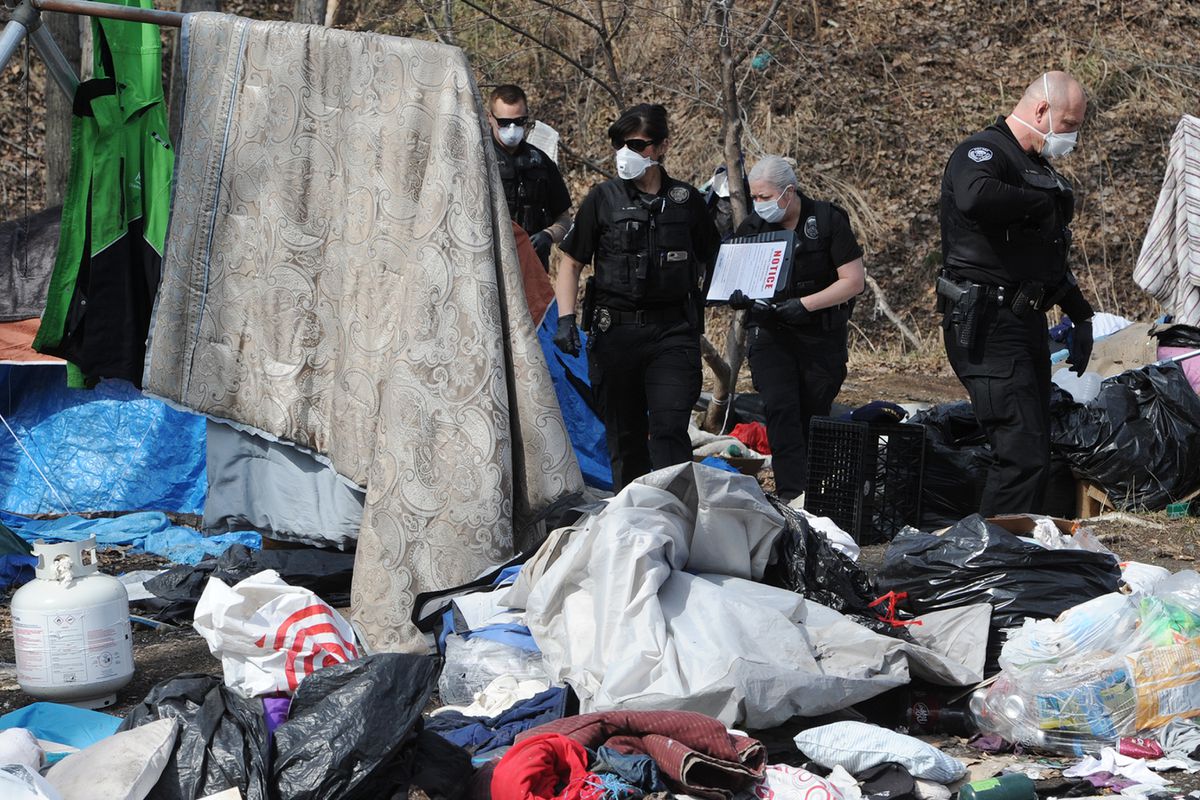 Officers with Anchorage’s community action policing team informed people at an illegal homeless camp at Third Avenue and Ingra Street on Thursday, April 30, 2020, that they should clear out before the camp is abated in 10 days. (Bill Roth / ADN)

Officers with Anchorage’s community action policing team informed people at an illegal homeless camp at Third Avenue and Ingra Street on Thursday, April 30, 2020, that they should clear out before the camp is abated in 10 days. (Bill Roth / ADN)

Officers with Anchorage’s community action police team went tent to tent Thursday at a sprawling homeless camp at Third Avenue and Ingra Street. Joined by Mayor Ethan Berkowitz, officers told campers the site would be shut down in 10 days and people should begin clearing out.

Campers were advised to go to the Sullivan and Ben Boeke arenas, which the city converted to mass shelters last month amid the coronavirus pandemic.

Emergency operations center staff joined police in distributing face masks, flyers about COVID-19 and tips for how to avoid catching or spreading the virus.

Sunny skies, spring-like temperatures and snow-capped mountains in the distance contrasted sharply with the conditions at the camp. Used needles, discarded clothes, piles of garbage and scores of bicycles littered the camp, which extends for acres around the former Alaska Native Service Hospital campus.

“If you think you’re sick, get that mask on and try to stay away from others,” said Bob Doehl, Anchorage’s director of development services and building official, handing a cloth mask to a homeless woman inside a tent.

“Go to the Sullivan Arena for a medical screening. You don’t have to go inside.”

Some campers said they already visited the shelter and decided it wasn’t for them.

“It’s repressive. It’s like living in a jail,” said a man who wouldn’t provide his name but offered he’s been in Anchorage for around 30 years.

Others have been barred from the mass shelter for violating policies.

Another man said he was willing to go.

Transportation was not provided Thursday.

Anchorage’s economic and community development director Chris Schutte said Wednesday that the city would consider offering transport when the camp is abated. He also said a hub for homeless services may be set up at the camp, similar to the one outside Sullivan and Ben Boeke, where people can find help with housing, access to Social Security and unemployment benefits, food stamps and many other resources.

As she worked her way through the camp, Anchorage police Sgt. Jennifer Haywood asked for people to step out of their tents and give their name and date of birth. The officer helped tie a mask on a woman wearing a red sweatshirt and black and white pajama pants. The woman was camping in garbage-strewn woods beyond a hole in the fence near the intersection of Third Avenue and Eagle Street.

As Haywood spoke about services, shelter beds and COVID-19 precautions, the woman promptly removed the mask from her nose and mouth, seemingly forgetting about its intended purpose.

“Please put that back on,” Haywood said.

Berkowitz spoke with several campers, asking their names, why they were living in the vacant lot and if they knew about the clean beds, food and help available at Sullivan and Ben Boeke arenas.

During the mayor’s conversation with a man in a tent overlooking Grubstake Auction Co., company owner Ron Alleva blasted his voice through a loudspeaker system on his property, across the street from the camp.

“You are putting yourself at risk,” Alleva shouted. “The Sullivan Arena is available. Services are there to guide you to your $1,200 stimulus check.”

“The main man is here. Ask him for water and port-a-potties,” Alleva said, referring to Berkowitz. “Ask him questions.”

The man inside the tent asked Berkowitz what checks the guy on the loudspeaker was talking about. The mayor explained how the federal government has provided financial assistance to Americans in light of the country’s severe economic downturn, triggered by the pandemic.

A man walking his bicycle up Third Avenue engaged in heated conversation with the mayor, insisting that people have to right to camp.

“There is a federal law that says camping is legitimate,” said the man, who offered his first name as Nisan.

“It’s an individual choice,” he continued.

“Right now, I’m not camping but I could be at the exit door any day,” he said. “You can’t pay these rents as a single individual.”

Asked why he chose to attend Thursday’s outreach effort, Berkowitz said he wanted to get a sense of the conditions at the camp and to encourage people to move to the mass shelter and service hub.

He said he appreciates the concerns of nearby residents and business owners who have complained loudly about the homeless camp and associated mayhem, particularly since the hunker-down order took effect March 22.

Anchorage’s homeless crisis is complex and it stems, in part, from what Berkowitz described as the country’s broken social safety net. Repairing the holes in a system that has been dismantled over decades, especially during an economic downturn, will be an enormous challenge, he said.

“It’s a test of our humanity measured against the resources we have,” Berkowitz said.

In a parking lot at Third and Eagle, on the other side of a fence separating him from an array of homeless tents, condo owner and attorney Yale Metzger expressed limited sympathy.

“It’s a monumental failure of this administration. This blight is happening on your watch,” Metzger told Berkowitz.

“Why aren’t you using the tools you’ve been given?” he scolded the mayor.

Berkowitz said abatement is a tool and the process is underway. Haywood said it would not make sense to immediately cite the campers with trespassing since police just informed them that they have 10 days to vacate the property.

With the eyesore of tents within feet of his rental unit, Metzger said he no longer takes potential tenants there. Who would want to rent?

It’s wrong that most citizens are abiding by the hunker-down rule but the city has allowed people to camp, in Metzger’s view.

“If there are no consequences, then we have a class of people who are exempt from the law. It’s unfair,” Metzger said.