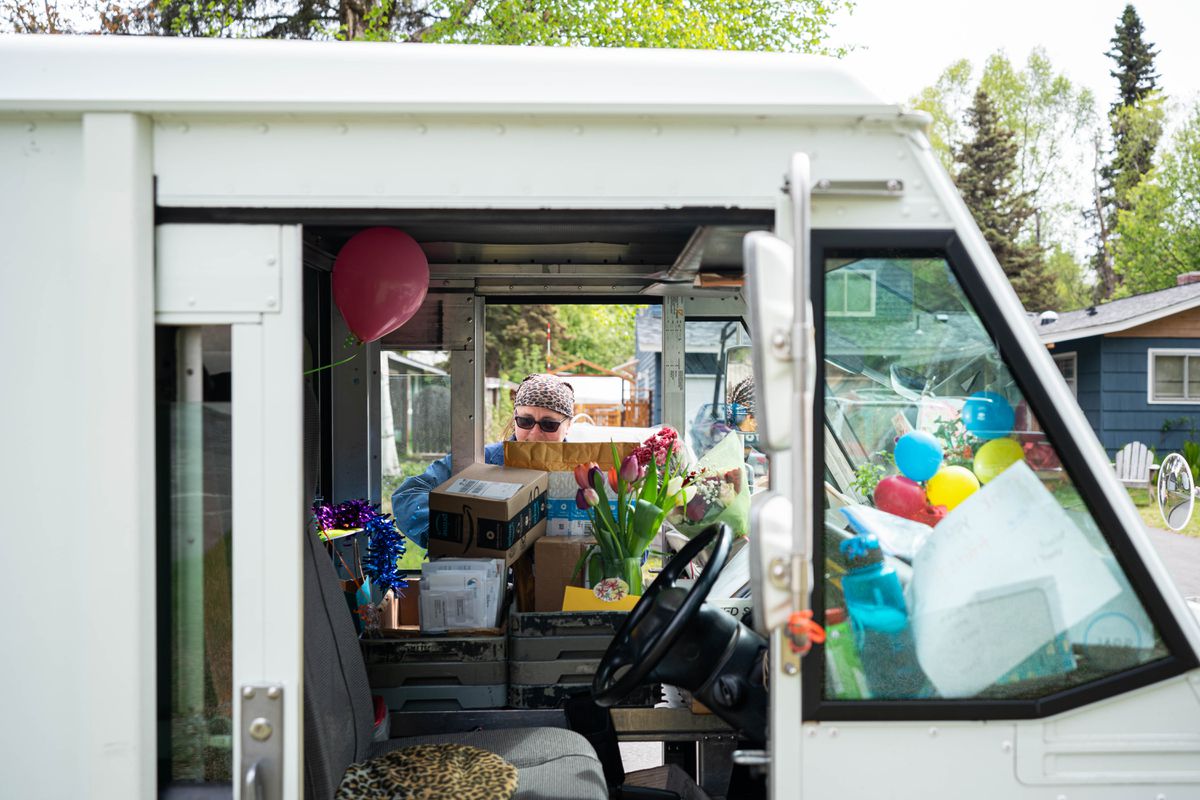 Mail carrier Weeze Smoke’s truck is filled with flowers and homemade signs on Saturday, May 23, 2020 in Turnagain. Smoke has delivered the mail in this neighborhood for the past 15 years and Saturday was her last day on the job before retiring. (Loren Holmes / ADN)

Mail carrier Weeze Smoke’s truck is filled with flowers and homemade signs on Saturday, May 23, 2020 in Turnagain. Smoke has delivered the mail in this neighborhood for the past 15 years and Saturday was her last day on the job before retiring. (Loren Holmes / ADN)

The U.S. Postal Service truck brimmed with flowers and homemade signs, but they weren’t meant to be delivered.

The gifts were tokens of appreciation for mail carrier Weeze Smoke, who spent her last day on the job in Anchorage’s Turnagain neighborhood saying farewell as she delivered a final batch of letters, bills and packages Saturday.

Delivering mail is “a connection to the people,” said Smoke, 57, who wore a cheetah-print bandana over a long braid, her nails painted a sparkly black and gold. “I think we need a little more of that."

That’s why she does it — and for the dogs, of course. They’re the best part of the job, Smoke said. She’s been carrying treats on her route since she started delivering mail some 30 years ago.

Now retiring, Smoke has been on the Turnagain route for the past 15 years. She wakes up at 4:30 a.m. each day, is at work by 7 and out of the office to her route by 9 a.m. Then it’s delivering the mail, 6 miles on foot.

The residents of Susitna Drive lined the street Saturday, waiting for Smoke to come around the corner.

Diane DiSanto stood in her driveway and started to clap as Smoke arrived. “Please Mr. Postman” by the Marvelettes played from a neighbor’s speaker.

“We’ve lived here for as long as she’s been delivering mail, so we’re just thanking her,” DiSanto said. “She knows all of us. She knows when we get a handwritten letter. She knows our families.”

[Anchorage car club revs up graduation celebrations, one rolling parade at a time]

The route continued past homemade signs, women walking by to say hello and goodbye. A dog that bounded toward Smoke received a bone from Smoke’s tie-dyed pouch.

Mr. Whitekeys, who goes by Keys — he’s the former owner of the iconic Fly By Night Club in Spenard and host of the Whale Fat Follies musical revue — played the accordion a few houses down.

Smoke handed him a letter. It’s not even a bill, she remarked, it’s a real letter. That’s a good day.

“Weeze, don’t you like Susitna (Drive) better than Foraker Street?” DiSanto joked as the assembled neighbors laughed. The next street over, Foraker, had lined up colorful balloons to say goodbye. “You get a concert, you don’t just get balloons."

On another part of her route, residents had arranged a pizza lunch for Smoke.

The day was going well until Smoke had to say goodbye to a 97-year-old who lives in the neighborhood.

"She can’t come out to the mailbox, so I take the mail in to her every day,” Smoke said.

In this line of work, you become connected to other people.

Smoke is a really good mail carrier — she’s on time and delivers the mail each day “perfectly,” Judith Haggar said from her driveway after the accordion died down and a cowbell rang in the background. But Smoke also does more than what’s expected, she said.

If someone prefers a package on the porch, Smoke will leave it there. If a resident wants their mail stopped, they don’t have to fill out the forms — Smoke will just do it for them.

“And above and beyond even that is, she is always just like you see her today,” Haggar said. “She’s got a smile for everybody. If you want to talk to her, she’ll stand and talk to you on the porch.”

And it doesn’t matter the weather, Haggar said. Smoke will be there. You can hear her coming in cleats during the winter even when the temperature dips below zero.

“We’re out here not because there’s mail in our box every day,” Haggar said. “We’re out here because she brings more than just the mail. And we’re really grateful for that.”

But it isn’t Smoke’s last day in the neighborhood. She’ll be back, though she won’t be wearing a blue uniform or carrying any packages, and there won’t be a time constraint.