'It’s not the same, Mama’: As summer camps open in Anchorage, kids and staff adapt to pandemic restrictions 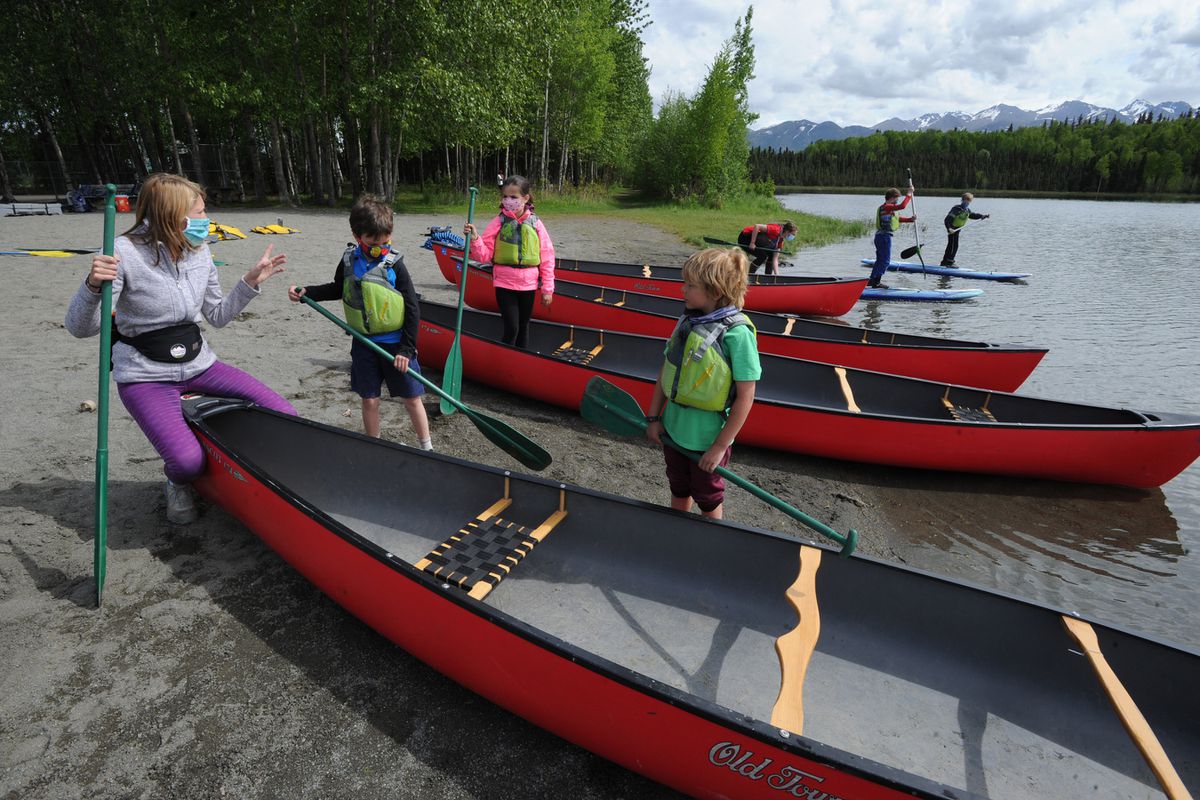 On Monday afternoon, pairs of children in red canoes bobbed across Goose Lake’s green surface. The 8- and 9-year-olds were at Trailside Discovery Camp, a summer day camp in Anchorage.

But this typical summer camp scene is distinctly different from previous years.

Each Trailside camper and staff member now wears a face mask — even while paddling. Equipment like canoes, life jackets and oars are all sprayed down and sanitized after each use. And instead of camp groups gathering each day at a single large day-camp site, groups are now smaller and spread across the city at five sites.

Many camps this spring redesigned their programs to align with former state and city pandemic mandates that imposed capacity restrictions and regulated how camps could operate safely. Then last month, state mandates were lifted, though some city regulations remain in place. But some camps are opting to stay shut down this year, finding it too challenging to get up and running under the circumstances. And many camps that are opening are taking extra precautions, following stricter rules than what is required.

[Alaska could be first state to ask travelers to get coronavirus tests. Some say they’d rather not come.]

Camps still offer games, sports and outdoor adventure — but most are now conducted at recommended social distances, with as little sharing of supplies among campers as possible.

That means instead of playing with items everyone touches like decks of cards or a Frisbee, kids now kick around a soccer ball, said Acadia Graham, program manager of Trailside’s Goose Lake group. Trailside has no field trips planned this summer because transporting campers at close quarters in vans increases the risk of spreading the coronavirus, Long-Leather said.

Trailside, which opened in late May, has opted to stick to the strict COVID-19 mitigation plan it developed under the previous mandates, Long-Leather said.

Both camps now have health screenings that include daily temperature checks. At Camp Fire Alaska’s sites, which also include licensed day cares, staff electronically record where campers go and whom they interact with, so in case of a virus outbreak it will be easier for city and state health officials to track, Hooper said.

“Camps need to operate with an abundance of caution,” Hooper said. “You have to assume if a symptom is on the COVID-19 symptom list that it’s COVID.”

Even though summer camps opening for the season are doing a lot of things differently, many Anchorage families are relieved to be closer to normalcy. Schools statewide shut down in March, cutting children off from social interactions with peers and teachers.

The camps that are running help to fill a big gap in child care that parents grappled with at the height of the coronavirus-related shutdowns. But not all day camps are opening, Azzarella said. Statewide, about half of summer programs have now shut down.

Anchorage’s Department of Parks and Recreation’s summer camps are closed, director Josh Durand announced in April. At the time, businesses across the state were shut down and it was not possible to hire anyone, in addition to the fact that there was not yet guidance for opening and running summer camps safely, Durand said.

The Sitka Fine Arts Camp also canceled its summer programs this year. And although the Anchorage Museum reopens this week, its summer camps will be held only online. Girl Scouts of Alaska this year is running only “virtual camps” for the safety of campers and staff, said Kelly FitzGerald, program director.

Some camps are canceled because they did not have the resources to mitigate health risks and increase staff while shrinking the number of campers. Still others are weighing the financial and health risks of opening, and may choose to open later in summer, Azzarella said.

The Anchorage Hockey Academy Summer Camp, for example, is getting a late start this year, likely opening in mid-June, and it will probably run only three weeks instead of five, said Kirk Kullberg, its mite director. Safety is his biggest concern, Kullberg said, and social distancing at a hockey camp is especially tricky.

“You have to mitigate it the best way you possibly can,” he said, taking steps like being outdoors as much as possible, wearing masks indoors and shutting down high-contamination areas like locker rooms.

Although camps can operate at regular capacities, some aren’t, meaning fewer spots for families who need them. Camp Fire Alaska is operating at about a third capacity and has a wait list, Hooper said

But at YMCA of Alaska’s Anchorage camp, only 60 of its slots were filled as of Friday. Many of the YMCA’s usual families have had a parent laid off and can no longer afford camp, Parker said.

That means the YMCA will likely cut its day camp program nearly in half, from 180 spots to 80 spots, said CEO Larry Parker. It needs to keep group sizes small for health safety, and it also can’t keep all its staff if more slots aren’t filled.

Long-Leather of Trailside also said many parents can’t afford camp and she is looking for ways to offer families scholarships, despite the camp losing between between $150,000 and $200,000 this year.

Beyond not having enough money, many families that parent Jensen knows also aren’t ready to risk sending their kids to camp, she said. But for her family, the benefits of Orion learning and playing outdoors far outweigh the risks, she said. And she feels like the camp is taking good steps to protect her son and other campers.

When Jensen dropped Orion off last Tuesday for the first day of Trailside Discovery Camp, the pair couldn’t get out of the car to hug friends and staff members as usual.

Instead, parents were asked to stay in their vehicles. A staff member took Orion’s temperature through the car window and screened the family with a series of questions, asking if anyone in the household had been feeling sick.

“It was very sterile,” Jensen said. “It was definitely very safe and cautious and appropriate for the time, but it was a very surreal experience.”

Orion has adapted to wearing a mask and is elated to be back at camp, she said. The unexpected months off from school were difficult for him socially and emotionally, she said, so for both of them, returning to Trailside is “a huge relief.”