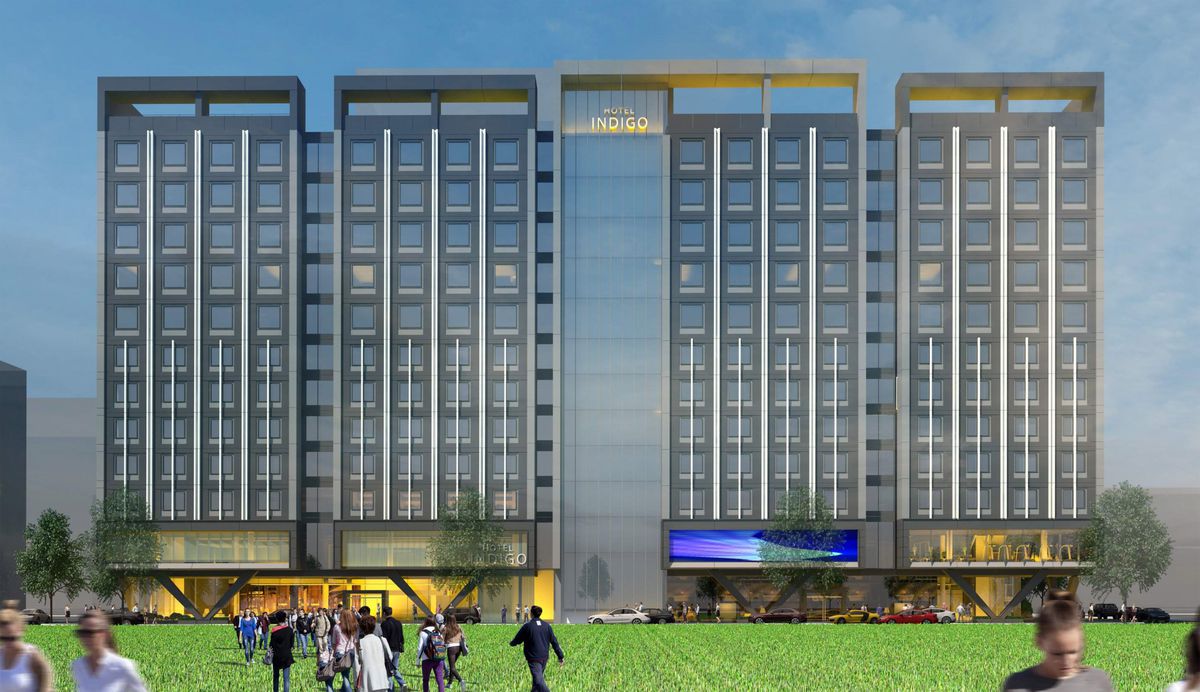 An artist's rendering of the proposed Hotel Indigo at 700 W.6th Ave. It is currently the site of the People Mover Downtown Transit Center. (2020 Artist rendering by RIM Architects)

An artist's rendering of the proposed Hotel Indigo at 700 W.6th Ave. It is currently the site of the People Mover Downtown Transit Center. (2020 Artist rendering by RIM Architects)

A $60 million boutique hotel project in downtown Anchorage faces headwinds amid a contractual dispute between the developer and the landowner, the Anchorage Community Development Authority.

The project is behind schedule. David Irwin, president of the developer, Irwin Development Group, said Monday the project was originally scheduled to start construction in May but is now on hold until at least September.

With the COVID-19 economic crisis further complicating the project, Irwin Development Group and the city agency are now seeking to rewrite some of the terms of a development agreement, he said.

Each side is pointing a finger at the other, claiming they missed deadlines and made excessive demands, according to communications provided to the Anchorage Daily News by Matt Singer with Holland & Knight law firm, representing Irwin Development.

[J.C. Penney store in Anchorage escapes round of national closures]

Andrew Halcro, executive director of the Anchorage Community Development Authority, said on Monday he could not discuss details of the dispute.

The authority has worked with the developer on the project for almost three years, he said in a text.

“We continue to try and find a path forward,” he said.

Part of the dispute involves a $350,000 security deposit that the development authority wants from Irwin Development, according to Irwin. If the city backs out of the project, $175,000 of that deposit would not be refunded, he said.

The authority threatened to terminate the deal on Thursday if the demands were not met, he said. As of Monday, Irwin Development had not accepted the terms but had received no response from the authority, he said.

“They seem dead-set on ending this project and I don’t know why,” Irwin said.

Halcro in February praised the project as an opportunity to improve downtown, create jobs and boost city revenue.

The 12-story Hotel Indigo, at Sixth Avenue between G and H streets, would be anchored against and supported by the eight-story EasyPark parking garage that’s run by the authority.

It would be the first major hotel construction in the area since the Anchorage Marriott Downtown was built about 20 years ago. To speed up construction, rooms would be pre-built in China and shipped to Anchorage by barge.

Irwin said the planned work in China, where the virus that causes COVID-19 was first identified last year, did not contribute to a delay in the project.

Instead, the development authority was required to temporarily relocate the city’s transit center and buses, located at the site, before construction could begin in May, he said.

But in January, Chris Schutte, director of the city’s Office of Economic and Community Development, said the move could not take place by May, Irwin said. Schutte did not return requests for comment for this article.

[US unemployment rate drops unexpectedly but still high at 13.3%]

On May 1, the authority confirmed the bus-center relocation would happen by late August, four months later than originally planned, Irwin said.

Also, the global economic collapse caused by COVID-19 began in March, creating an extraordinary unplanned event that added to investor anxiety, he said.

The authority says Irwin Development should have completed raising finances for the project by April 1, according to a 15-page letter from Holland & Knight and addressed to Diana Parks with Dorsey & Whitney, the law firm representing the authority.

But the attorneys for Irwin Development dispute that, in part because of the delayed bus-center move, according to the letter, dated Thursday.

Also, the pandemic is considered a “force majeure" under the development agreement and ground lease between the parties.

Such an event — often called an act of God — allows an extension of all the contractual deadlines, an attorney for Irwin Development says in the letter.

Irwin Development seeks an additional two years of free rent, according to an email from Parks, the attorney representing the authority, to Irwin’s law firm. The developer needs to provide additional financial paperwork to receive that benefit, according to the email, she said.

If things can’t be resolved to move the project ahead, he’ll consider bringing a lawsuit against the development authority.