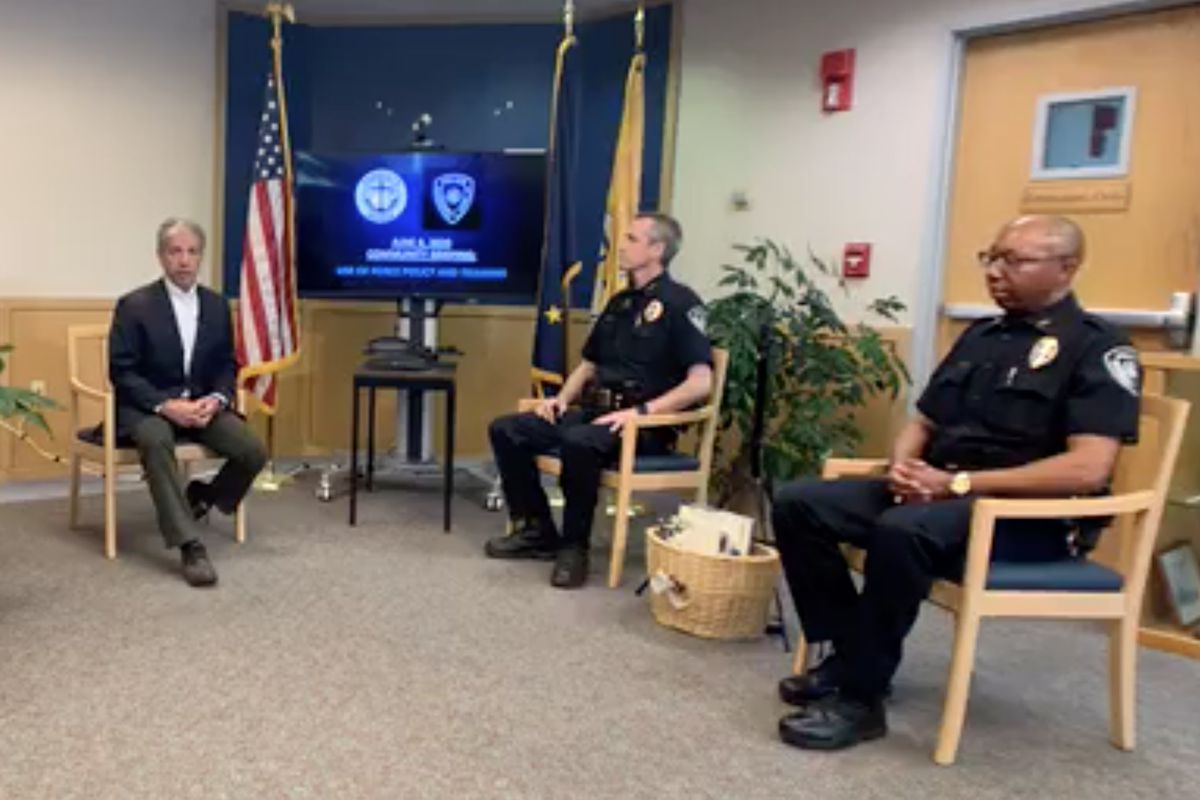 As protests in the wake of George Floyd’s killing push significant changes to police departments in other U.S. cities, Anchorage Mayor Ethan Berkowitz, Police Chief Justin Doll and Deputy Chief Kenneth McCoy told the public Tuesday that they will continue to seek ways to improve policing in Alaska’s largest city but are not planning major changes.

“But at the same time, we need to recognize that there are a lot of people that are doing brave things on an ongoing basis,” Berkowitz said.

Berkowitz, Doll and McCoy took questions from news media and the public about the police department’s use-of-force policies.

Chokeholds and strangleholds "are not permitted under APD policy, unless deadly force is authorized. So those are not techniques that people can use on someone that’s resisting,” Doll said.

Floyd’s killing has spurred protests and riots nationwide, with protesters demanding change rather than the lip service they feel police and city leaders have given to criminal justice reform for decades.

The movement has already brought about drastic change in some places, with Minneapolis’ city council announcing it will dismantle its police force in exchange for a community-led public safety system. Other major cities, including Los Angeles, have pledged to shrink the police budget and spend instead on things like subsidized housing and mental health resources.

That sort of reform is not on the horizon in Anchorage. During Tuesday’s briefing, Berkowitz and Doll said Anchorage is not facing a crisis like some Lower 48 cities.

“Here in Anchorage, we have taken a huge step and we are vastly different than the way things were in the past,” Berkowitz said. “We have a police department that has much more of a guardian mentality than a warrior mentality.”

Doll said APD works hard to have a strong and open relationship with the community.

“We have a very progressive mindset when it comes to use of force,” Doll said.

APD has about 425 officers. Its $121 million budget is the largest of any city department.

Body cameras became the subject of national discussion about six years ago after a spate of high-profile police shootings. By 2016, almost half of all U.S. law enforcement agencies had body cameras, according to the U.S. Department of Justice. About 80% of departments with at least 500 officers had body cams by 2016.

Doll said APD officers are required to report use of force, which includes pulling a gun or Taser on someone without deploying it. Any complaint of use of force is investigated by a supervisor or internal affairs, Doll said.

Records of those complaints are not public due to state law, Doll said. He declined to take a position on making those records public.

“That would have to be a discussion around making some changes to the constitution, which I don’t think I’m qualified to participate in,” Doll said.

One call for reform that has been amplified during recent protests is to make police disciplinary records available to the public.

Deputy Chief McCoy said APD has a “robust internal investigation process” and a good relationship with external community groups scrutinizing police use of force, but the department is always looking to improve.

While protests speaking out about Floyd’s killing and broader issues of injustice or police brutality continue in Anchorage and across Alaska, they have not resulted in violent clashes with police or the destruction of property, unlike in a number of other U.S. cities.

However, at a Friday protest in Anchorage, the Feb. 16 fatal shooting of Lufilufilimalelei “Daelyn” Polu by APD officer Jason Cusack became a rallying point, with Polu’s family calling for more investigation of the fatal altercation.

Investigators have said that during a struggle to remove Polu from a vehicle, he pulled out a gun and shot at police before they returned fire. A state investigation found Polu fired two shots, with one hitting officer Brian Vanderbunt’s bulletproof vest, where it stopped.

Berkowitz spoke at the Friday rally, praising those in attendance for being “revolutionaries.” For nearly two minutes, his speech garnered cheering and applause.

Then chants of “defund the police” started.

“This police department does not do the things that are done in other places,” Berkowitz told the crowd.

On Tuesday afternoon, a change.org petition demanding reform following Polu’s death was getting multiple signatures per second. The petition called for the investigation into his death to be reopened, for independent review of police use of force and for the use of body cams.

It also chided Berkowitz for speaking at the rally after Polu’s family lamented his death, without mentioning the incident.

When asked about the investigation into Polu’s death, Doll said the investigation was turned over to the state Office of Special Prosecutions. On Feb. 27, that office closed the case and declined to file charges against Cusack.

Berkowitz said there’s pain for everyone involved in the shooting, and healing for the community to do.

Berkowitz, in closing Tuesday’s briefing, spoke about decades of injustice, such as redlining and wealth disparity. He said there is a responsibility for all to strive for the liberty and justice this country long ago promised its residents.

“I need to listen more with my heart than perhaps I did initially,” Berkowitz said. “This is not a problem we can solve by applying some policy answer.”

Tuesday, June 9, 2020. Today’s community briefing includes Mayor Berkowitz and Anchorage Police Chief Justin Doll and Deputy Chief Kenneth McCoy. The briefing will address community concerns and continue the conversation raised in the aftermath of the tragic killing of George Floyd by the Minneapolis Police Department last month. Please ask your questions in the Facebook Live comments, and we’ll do our best to get to them.

Correction: An earlier version of this article incorrectly reported that Mayor Ethan Berkowitz said an officer that used a neck hold like the one that killed George Floyd would be fired. Berkowitz was referring to inflammatory posts by police officers on social media, not the use of neck holds that resulted in the killing of Floyd. Also, an earlier version of this article referenced “the neck hold that killed Floyd." There are conflicting autopsies regarding the exact cause of Floyd’s death, although both concluded it was a homicide.