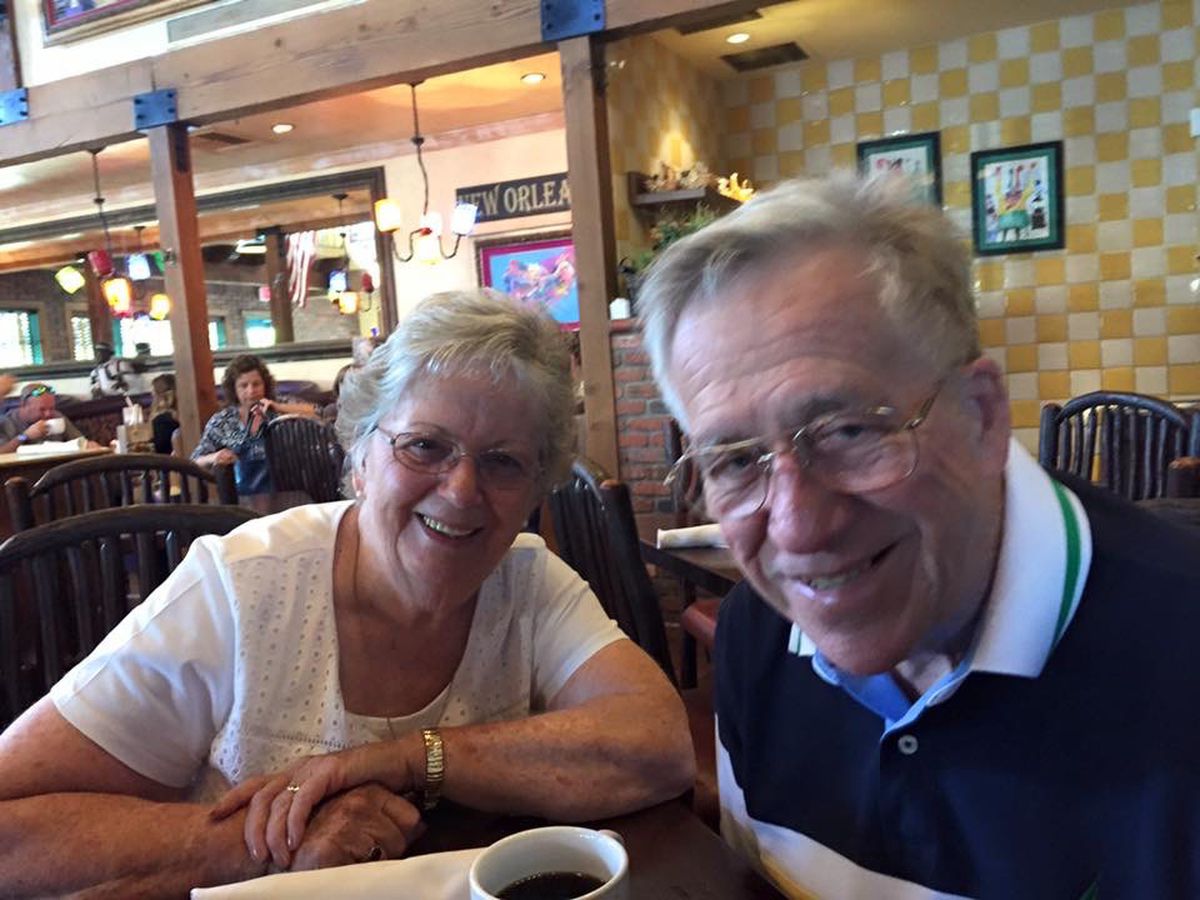 Diane Smith, left, and George Smith in an undated photo. Smith, who died Thursday, June 11, 2020, is the 12th Alaskan with COVID-19 to die since the pandemic began. (Courtesy Susan Peck)

Diane Smith, left, and George Smith in an undated photo. Smith, who died Thursday, June 11, 2020, is the 12th Alaskan with COVID-19 to die since the pandemic began. (Courtesy Susan Peck)

Susan Peck will remember her father, George Smith, as the practical joker who could fix just about anything.

Smith died Thursday at age 81 after becoming infected with the coronavirus at a transitional care center in Anchorage.

He arrived at Providence Transitional Care Center in late February after a fall that caused a brain hemorrhage and, later, a stroke from surgery. He was making some progress and was starting to use the left side of his body, Peck said in an interview Saturday, though she isn’t sure whether he would have been able to eventually come home to the Kenai Peninsula.

Smith had arrived at the Providence facility roughly a week before it stopped allowing visitors due to coronavirus concerns, Peck said. At first, his family would call him and approach the window of the facility.

“He was so lonely. That was so hard,” Peck said. “And it was really hard on my mother too.”

Peck’s mother would FaceTime Smith every day and Peck would call him too. She and her siblings would use Zoom to talk to him together on the weekends.

In late May, Smith’s family received crushing news: He had tested positive for COVID-19. Smith was one of several people with COVID-19 at the center, where by Saturday evening, the virus had infected a total of 27 caregivers and 18 residents.

Smith was transferred to the Providence hospital, and nurses there made certain Smith could get on video calls with his family, Peck said. The communication between Smith’s family and the physician was “phenomenal,” Peck said.

“Then we knew that there was no hope left for him," Peck said. "And we decided to do comfort care. Because he really went downhill fast. And then shortly thereafter, he died.”

“He knew she was there,” Peck said.

Smith’s death is the second among Providence Transitional Care Center residents this week. He is the 12th Alaskan with COVID-19 to die since the pandemic began.

"We are saddened by this loss and extend our condolences to all of their loved ones during this difficult time,” Providence spokesman Mikal Canfield said in an emailed statement Friday.

“Sadly, we are announcing the death of another Alaskan today and I want the individual’s loved ones to know we are thinking of them,” Alaska’s chief medical officer, Dr. Anne Zink, said in a statement Friday. “Since the beginning of the COVID-19 pandemic, we have been especially focused on the extra precautions that are needed to prevent the spread of this disease into our more vulnerable populations, including those in skilled nursing facilities like the PTCC."

Initially, Smith’s family didn’t know that he was showing symptoms of COVID-19 or that he had been tested for the virus, Peck said. She said that she and her mother didn’t find out that Smith had COVID-19 until the day after he had tested positive, when they called to check on him — which they did frequently.

“It was not out of any malice. I do not believe that," Peck said of the timing of the notification. "I think they were just trying to figure out what to do, how to notify people, how to take care of the situation,” Peck said.

Once Peck and her mother asked what was happening, she said, they were both told he had the virus.

Carlie Franz, a spokesperson at Providence Health and Services Alaska, said they are required to notify families of a resident who tested positive by 5 p.m. the following day.

“However, we make every attempt to make notifications within 24 hours,” Franz said in an email.

Peck will remember her dad’s humor. He would play practical jokes on his wife, who still fell for them even after so many years together. He had quite the sense of humor — putting pine cones down on the floor and pretending that it was their dog’s poop, or short-sheeting the bed while his wife was up in the middle of the night.

And Smith could fix everything, Peck said. When he was 70 years old, he and Peck’s mother built a log cabin where they continued to live at the end of Funny River Road, Peck said.

And the two were still affectionate, even after 60 years together, she said.

And now, their family must mourn their loss in the middle of a pandemic, when large gatherings can be another venue for the spread of the virus.

They’ll have a socially distanced graveside service in Soldotna next week, Peck said, but one sibling cannot attend because of health risks associated with travel.

There’s so much to consider now, Peck said. Do you hug each other? If you cry, can you touch your face?

“You want to comfort each other and you can’t,” Peck said. “You can’t all be together because of this virus.”