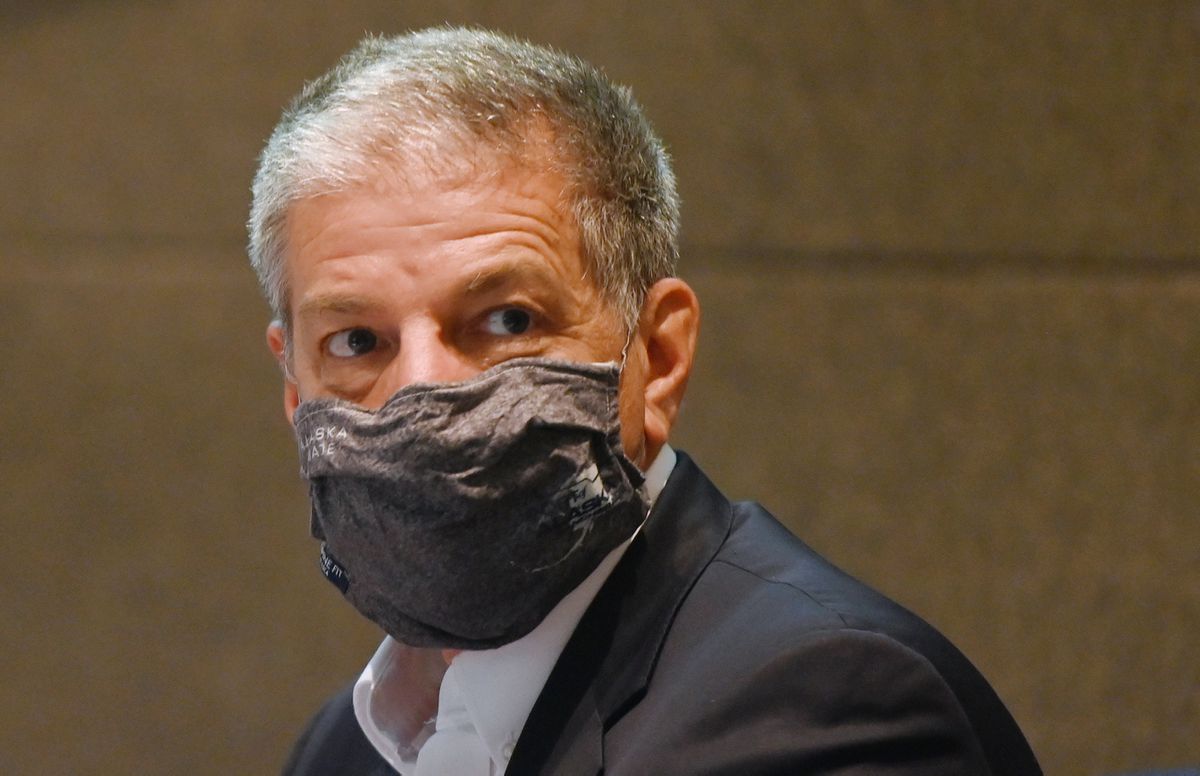 Anchorage Mayor Ethan Berkowitz has prepared an emergency order mandating the wearing of face coverings in indoor public spaces, he said Tuesday, and he is ready to issue it in the next few days if the current trend of rising coronavirus case numbers continues.

“We have prepared an ordinance that will require the wearing of masks under certain circumstances,” Berkowitz said at the beginning of Tuesday night’s Assembly meeting. “That order is ready and could be implemented at any time.”

Berkowitz said he plans to issue the order in the next two or three days if the case numbers remain on the same trajectory.

When asked to clarify if he was talking about local case trends, he said he was referring to local, state, nationwide and global cases of COVID-19.

“There is increased community spread, there is disregard of some of the public health precautions that have kept us safe to this point,” Berkowitz said.

Among those present at Tuesday’s meeting were two dozen people protesting a mask mandate who stood outside the Anchorage Assembly chambers for about an hour before it started. They attended the meeting after it was publicly announced that Assemblywoman Meg Zaletel planned to introduce a resolution for the Assembly to recommend that Berkowitz impose a mask mandate. That item never ended up being introduced.

Berkowitz said he will also give people a few days to acquire masks before the order takes effect. The city has some masks that it could start to distribute, he said.

The announcement of the potential emergency order comes after Alaska — following weeks of single-digit resident case counts statewide — reopened its economy in May. In the weeks since, the number of active COVID-19 cases, involving people who are not yet considered recovered, has ratcheted back up and reached new highs on several days in a row. On Tuesday, Alaska reported 35 new cases of the virus involving residents and non-Alaskans.

State health officials have continually urged Alaskans to wear a face covering at businesses, gatherings and public spaces where maintaining a distance of 6 feet from other people would be difficult. The federal Centers for Disease Control and Prevention advises wearing cloth face coverings to slow the spread of the virus, especially since people can be infected and spread the virus without showing symptoms or before they start feeling sick.

Over the past week, several states have issued statewide or partial mask mandates for people in public indoor spaces. On Tuesday, Washington Gov. Jay Inslee issued a statewide order requiring facial coverings in public. Inslee argued that masks are one of the tools leaders have to slow the spread of the coronavirus.

“The wearing of masks is an economic benefit,” Berkowitz said.

He said that the potential emergency order would take into account medical issues that might make it difficult for someone to wear a mask.

“If wearing a mask compromises people’s health or you have breathing difficulties, then there would be no requirement to wear a mask,” he said.

After Berkowitz announced the potential order, several people lined up to give testimony against a mask mandate, saying that masks were unsafe and requiring their use infringed upon personal freedoms.

One was state Sen. Lora Reinbold, R-Eagle River. She said there is a lack of solid data showing masks are helpful in stopping the spread of the virus, and said there is concern that wearing a mask for a lengthy period of time could have negative health impacts.

David Paulson and his son, Nate, were among the people protesting a mask mandate outside the Loussac Library, where the Assembly chambers are located.

David Paulson, a neurosurgeon, said wearing a mask has become a “symbol of moral superiority.”

Paulson said the mandate would be ineffective and only serve to make people feel good about themselves.

Nate Paulson said he was protesting because medical choices should be up to the individual.

“I feel strongly about it because I am very pro-personal freedom,” he said.

In an interview earlier on Tuesday, Anchorage resident Anne Kranawetter said that during the pandemic, people who decline to wear masks are actually infringing on her personal health. She said she was at the DMV recently, and there were clusters of people packed in tight spaces, many of whom were not wearing masks.

“It was frankly scary,” she said. “People are not doing what’s being recommended on their own.”

Kanawetter said she emailed the mayor and Assembly because she’s seeing people become complacent since businesses opened back up.

“People are misinformed and uninformed,” she said.

Anchorage resident Julia Hennig said she couldn’t make the Tuesday night meeting, but she submitted a letter to the Assembly asking them not to impose a mandate. She said she believes forcing masks is about more than public health. It’s about control, she said, and she’s worried it will be imposed long-term.

“I think it does have to do with control. I really do,” Hennig said. “I think it’s connected with the vaccines. I think it could be the first step in pushing further COVID vaccines. I am afraid of it.”

Lydia Johnson also wrote a letter, hers advocating for a mask mandate. She said confusing guidance from the federal government — which initially said people should not wear masks before reversing its position — has been confusing for people.

Johnson has family members that are high risk, so she tries not to go out in public, but sometimes she has to go grocery shopping. She said a mandate is needed because information about the virus is changing rapidly, and people are not properly following the updates.

“Maybe they don’t comprehend what they are reading, if they’re reading, and some people feel that it’s very important to their personal freedom. They see it as a slippery slope that we are going down,” Johnson said.

Johnson said those are valid fears, and she understands the touchiness of the subject.

“But I feel like this is different, in that it’s not about you personally, it’s about your community,” she said.