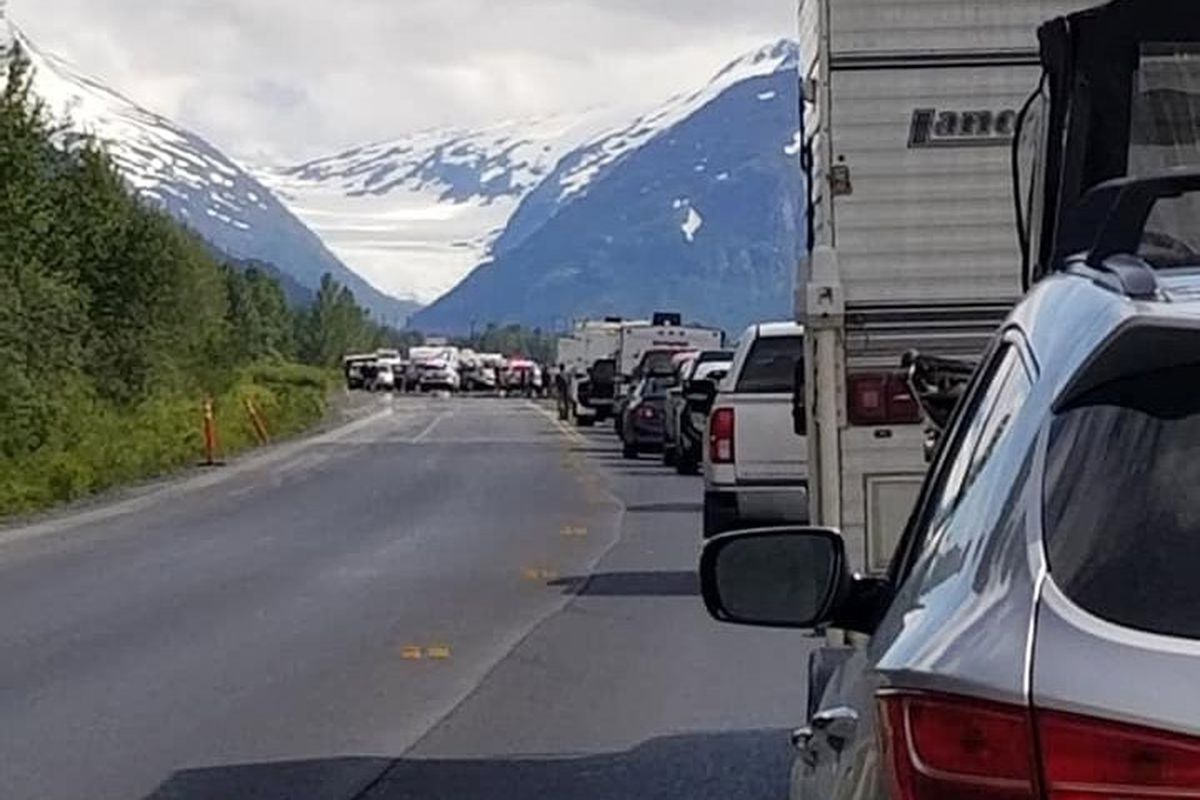 Traffic stopped on the Seward Highway near Girdwood after a fatal collision Monday, June 22, 2020. (Photo by Johnnie Stock)

Traffic stopped on the Seward Highway near Girdwood after a fatal collision Monday, June 22, 2020. (Photo by Johnnie Stock)

A father and his young daughter died Monday afternoon when their vehicle was hit in a three-car crash along an accident-prone portion of the Seward Highway.

Michael F. Witman,65, and his 6-year-old daughter Aviendha D. Witman died in the crash Monday, police said in an online alert. Four others were taken to a hospital, some with life-threatening injuries, after the crash near the Portage turnoff, police said.

Witman was a volunteer for the Chugiak Volunteer Fire and Rescue Company for 17 years, the organization said.

“Mike was admired as a skilled and knowledgeable firefighter, apparatus operator and officer,” Chugiak’s fire chief Tim Benningfield said in a written statement. “His legacy in the fire service will be appreciated by generations to come.”

Police were called to the crash at 2:53 p.m. The Seward Highway remained closed for about five hours.

The crash happened within a construction zone just north of Mile 82, said Shannon McCarthy, spokeswoman for the Alaska Department of Transportation and Public Facilities. Work had recently finished in the area, where two northbound lanes taper into a single lane, but the stretch of roadway was still marked with signs announcing double fines for traffic violations. Construction is expected to continue along the highway to Mile 90 until fall.

Investigators believe a northbound Subaru crossed into a lane of oncoming traffic near the Portage turnoff and struck a black 2016 Jeep Patriot head-on, police said. The Jeep rolled as it continued moving south and the Subaru went sideways. It was T-boned by a Volvo driving behind the Jeep, police said.

There was a family of four inside the Jeep, police said. A man and a girl — Witman and his daughter, according to the Chugiak fire organization — died at the scene. A woman and a girl were brought to the hospital and are expected to survive, police said.

Four people from the same family were in the Volvo, according to police. A woman was brought to the hospital in unknown condition and police said the other three occupants, a man and two juveniles, had minor injuries.

The man driving the Subaru had life-threatening injuries, police said. No one else was in his vehicle.

No arrests were made Monday and police said they are investigating the circumstances surrounding the crash, including whether impairment or speed were factors.

The crash happened in an accident-prone stretch of the highway currently undergoing construction. The Department of Transportation continued the first phase of construction this summer in the Mile 75 to 90 project. The work comes after more than a decade of deliberation about how to improve road safety and reduce congestion during heavy travel times.

The Seward Highway is designated as a scenic byway and is the only connecting road from Anchorage to the Kenai Peninsula. There are few passing lanes along the 15-mile stretch of highway from the Girdwood turnoff to the north end of Turnagain Pass, and the roadway can become heavily congested, especially during peak summer tourism.

McCarthy said the project will add passing lanes in several locations, create wider shoulders and straighten several winding curves to increase visibility and make the roadway safer. New parking lots along the road will accommodate fishermen who previously lined the shoulders of the highway while dipnetting and fishing for hooligan. Several bridges will be repaired and reconstructed, also.

The area is prone to accidents, with 330 crashes recorded from 2000 to 2010. McCarthy said officials identified a need for safety improvements along the roadway as they saw trends in similar portions of the highway with two-way traffic and large volumes of cars.

McCarthy said construction has continued as scheduled and the first phase of the project is expected to wrap up in the fall. The first phase included work from Miles 75 to 77.7 and 81 to 90.