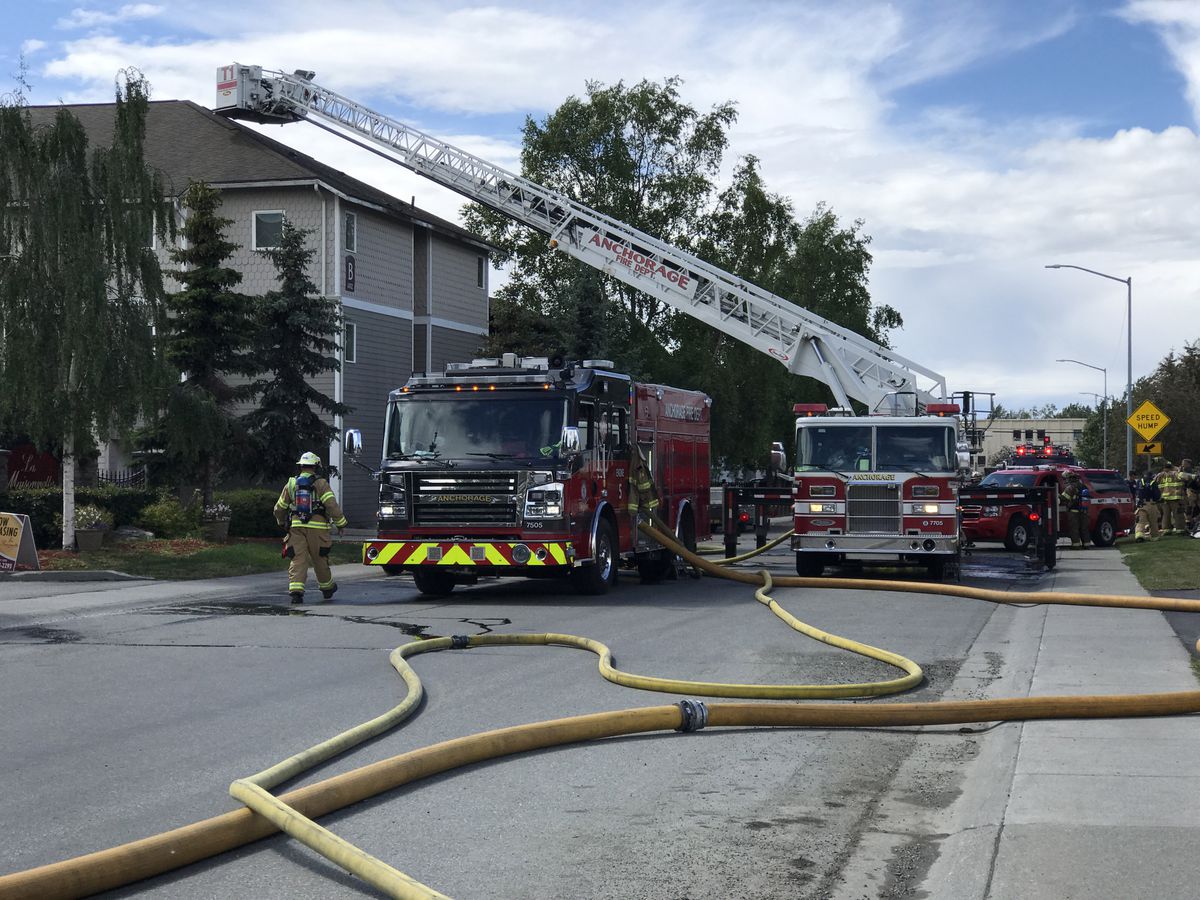 Update, 3:30 p.m. Tuesday, June 30: Anchorage police in an alert Tuesday identified the victim who died in the fire as 67-year-old Sue Ulmer.

One person was killed in a fire Wednesday afternoon at a 16-unit apartment building in Anchorage’s Spenard neighborhood, fire officials said.

No one else was injured in the blaze at La Maisonnette Apartment Homes at 1402 W. 26th Ave., Assistant Fire Chief Alex Boyd said Wednesday evening. The Anchorage Fire Department will not release the fire victim’s identity until next of kin have been notified, the department said in an alert.

Firefighters were called to the apartments, on West 26th between Spenard Road and Minnesota Drive, around 1:30 p.m., and Boyd said flames were coming from one of the units. A second set of crews was called to the scene, and there were 17 units still in the area roughly two hours later. The fire caused heavy damage to two units, Boyd said.

Firefighters were working with the American Red Cross to find temporary housing for all of the residents, Boyd said. Residents gathered in the parking lot of a neighboring building Wednesday afternoon as they spoke with volunteers and glanced at the charred exterior of their building.

Lynette Larsen and her friend Krysten Beatty, both 15, had slept in Wednesday and awoke in the early afternoon. Larsen said she was microwaving food when the fire alarms first went off and she initially thought she’d accidentally triggered the response.

She said she heard breaking glass and yelling from the building shortly afterward. When the teens opened the door of the top-level apartment, Larsen said the air had turned black from the thick smoke trapped in the hallway.

After they made it out of the building, Larsen called her mother, Jesse Merculief, who raced home from work. She said she’s thankful her daughter and many of the building’s residents were safe. Merculief and her daughter live in the apartment next to one that sustained significant damage. She’s not sure if her apartment has any damage.

“I just can’t believe this happened,” she said.

Red Cross volunteer Bruce Whelan said all of the complex’s residents would receive immediate assistance because the building would likely be uninhabitable for 72 hours. The power was off, Whelan said, and it’s unclear if there was damage from the fire, smoke or water in any of the other units.

Whelan said the building’s owner, Weidner Apartment Homes, was helping relocate some residents into units in other buildings the company owns. The Red Cross also planned to put residents up in hotel rooms Wednesday night.

Boyd, the assistant fire chief, said it was not immediately clear what caused the blaze.

The fire was under control shortly after 3 p.m., the fire department said. Investigators were working to determine its cause and origin at the scene Wednesday evening.

West 26th between Minnesota Drive and Spenard Road was closed for several hours as firefighters responded to the blaze, and fully reopened by 7 p.m.