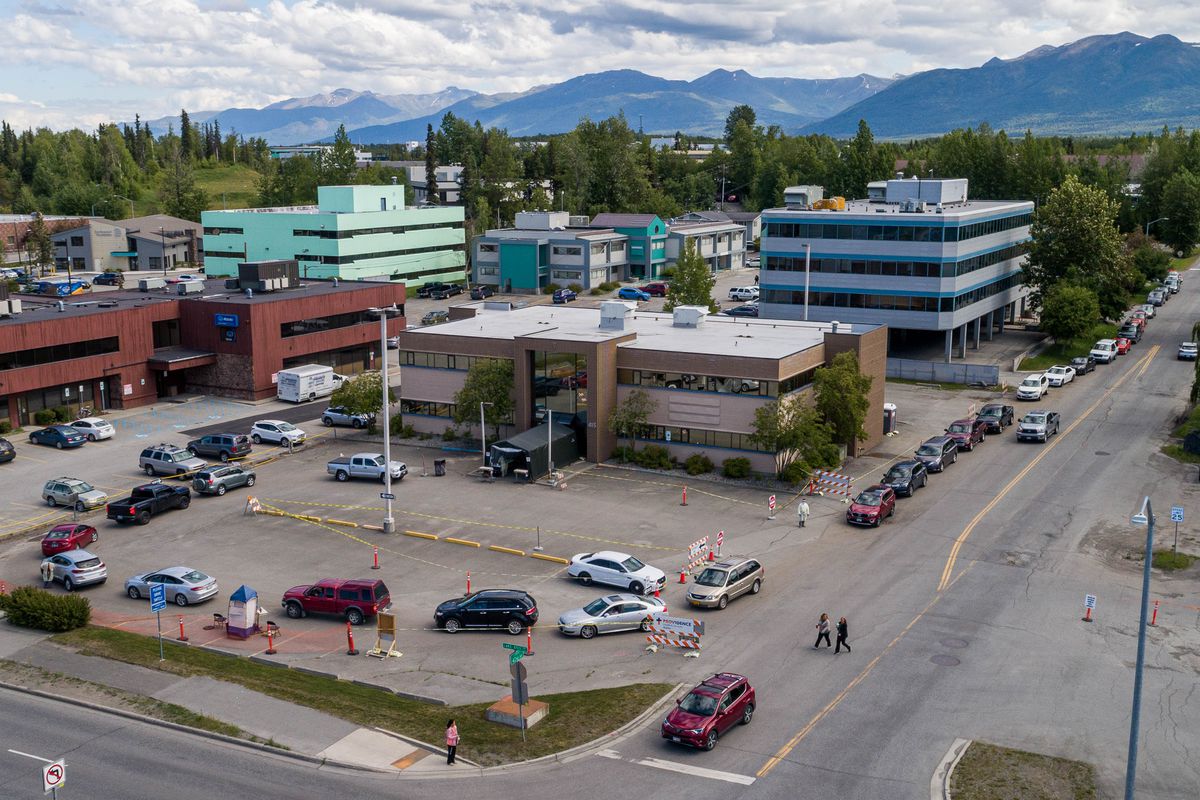 Cars wait in a line that wraps around the block Thursday at a COVID-19 drive-thru testing site on Lake Otis Parkway in Anchorage. A photographer counted 46 cars in line shortly after noon Thursday, and people have reported waiting several hours to be tested. (Loren Holmes / ADN)

Cars wait in a line that wraps around the block Thursday at a COVID-19 drive-thru testing site on Lake Otis Parkway in Anchorage. A photographer counted 46 cars in line shortly after noon Thursday, and people have reported waiting several hours to be tested. (Loren Holmes / ADN)

Anchorage resident Tonia Baklanova, 32, was experiencing mild symptoms associated with COVID-19 — a sore throat and fatigue — so she decided to get a test at the drive-thru testing site on Lake Otis Parkway earlier this week.

Anchorage opened the site to more people on Tuesday, including travelers with testing vouchers and those without a doctor’s referral. But the site had long wait times for some seeking a test, including Baklanova.

Baklanova said she pulled into the line of the testing facility at 2 p.m. on Tuesday. Then, she waited for nearly five hours.

She said she thought about leaving, but she decided to get tested because she didn’t want to spread the illness to others.

“It was just really frustrating sitting there and waiting in the car,” Baklanova said.

The site was initially set to close down in mid-June but has been able to stay open, funded by the Municipality of Anchorage and staffed by Fairweather LLC through a contract with Providence Health & Services Alaska, which owns the physical location, according to Providence spokesman Mikal Canfield.

The municipality sent out an alert Thursday clarifying guidelines for online pre-registration and testing at the site. The city later removed a line in the alert about testing at the facility for someone who is not experiencing symptoms.

The site may be used by people who have COVID-19 symptoms, travelers and people who need a test before going back to work, according to Canfield.

“Compared to when Providence was running the site, it is running slower,” said Audrey Gray, public information officer for the Anchorage Emergency Operations Center. “But part of that is just because of the change of how to access, how to pre-register, who was actually being tested.”

Shortly after noon Thursday, a long line stretching at least 40 cars deep wound around the block.

Another source of confusion is the website — app.kelvin.care — where someone can register for a test ahead of time, in a form that appears to be designed for interstate travelers. Since the state of Alaska provides the testing supplies, “they requested the use of that app because it makes it easier for them to get people their test results,” Gray said.

But, Gray said, if someone is experiencing symptoms and hasn’t traveled recently, or if they need to be tested so they can go back to work, they can still fill out that pre-registration form before going to the drive-thru testing facility. The city recommended pre-registering to reduce wait times.

Gray said the municipality has requested that the page get updated with options for nontravelers. The city’s alert sent out Thursday included a step-by-step guide for filling out the form.

“I know it’s really confusing, but it’s all we have for right now until they can update the app,” Gray said.

There was one worker registering people at the site Tuesday, Baklanova said, describing her experience there. She said she thought many of the people who lined up hadn’t registered beforehand. It took 10 minutes to register one person, according to Baklanova’s estimate.

The test itself was fast, Baklanova said. She leaned out of her window, got swabbed and then was on her way home. She registered in advance and was waiting on her results Thursday afternoon, she said.

Baklanova said she read on the state health department’s website that anyone experiencing symptoms should get a test as soon as possible.

“So I went there literally within an hour of reading that information,” she said.

She said she was there from 2 to 6:45 p.m. on Tuesday, and there were several drivers behind her who had to leave without getting tested.

Gray confirmed that on Tuesday and Wednesday, the line stretched around three blocks long and people were turned away at the site. Gray said they could still come back for a test another day.