He went for a run in Anchorage. A woman stopped to ask if he belonged in the neighborhood. 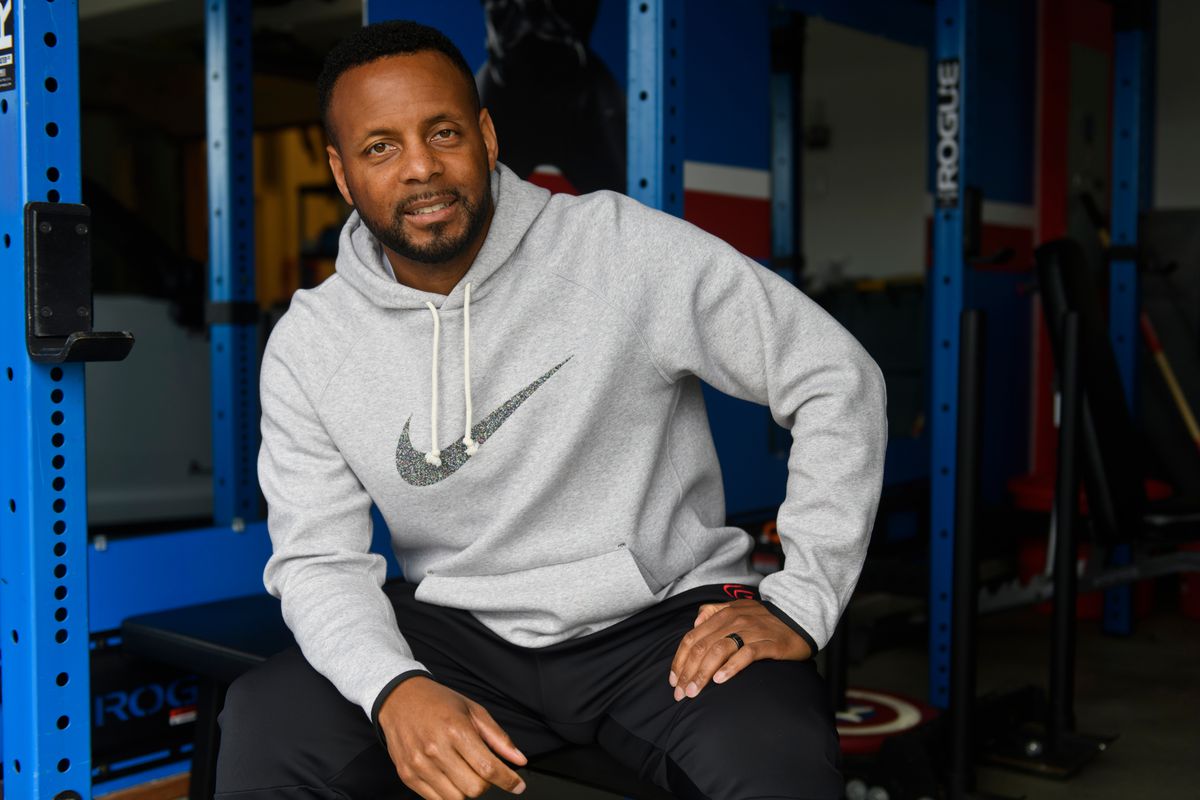 Anchorage resident DeWayne Ingram said he was recently stopped and questioned by a driver while he was jogging on a residential street. (Marc Lester / ADN)

Anchorage resident DeWayne Ingram said he was recently stopped and questioned by a driver while he was jogging on a residential street. (Marc Lester / ADN)

The afternoon of June 20, DeWayne Ingram was on a short run through a neighborhood on the Anchorage Hillside when an SUV pulled alongside him.

The woman driving asked Ingram what he was doing in the neighborhood, he said. The woman was white. Ingram is Black.

Next came a fraught, at times bizarre, exchange that quickly landed on the internet, becoming an Anchorage entry in a growing collection of cellphone videos showing Black people stopped, accosted and threatened with police intervention for pursuing everyday activities.

It left Ingram — a 46-year-old father of three, U.S. Army veteran, trainer of elite student athletes and pharmaceutical sales rep who has lived in Anchorage for 18 years — in a state of hurt and disbelief.

“We think this can’t happen in Anchorage, but it just did,” he said.

The encounter happened in the midst of a historic reckoning with systemic racism in the United States that has led to protests worldwide, including in Anchorage and elsewhere in Alaska.

Thousands of miles away, the children of the woman in the video saw it and winced. They’d been trying to get psychiatric treatment for their mom for years.

‘I was perceived as a threat’

On that Saturday afternoon, Ingram and his family had to get out of their South Anchorage home so their real estate agent could hold a four-hour open house. The family is in the process of relocating to Seattle for Ingram’s job.

At first, Ingram, his wife, Melissa Lamebull Ingram, and their three sons, ages 7, 12 and 15, went to walk around at Glen Alps. But Lamebull Ingram was worried about their new puppy being around so many large dogs.

They decided to head to Trailside Elementary School, near Service High, so the kids could play and Ingram could go for a run on the adjacent trail system.

Ingram is a serious runner — he competed as a Division I college sprinter at the University of Oregon and ran daily during his years in the Army.

Ingram was nearly finished with a 2-mile run when he was stopped near the corner of Mars Drive and Zenith Street by a woman in a champagne-gold SUV.

The woman, wearing sunglasses and a T-shirt, asked his name, what he was doing and why he was there, he said.

Though he doesn’t recall the exact wording, he said she asked how she could be sure he wasn’t in the area for “bad intentions.”

At that moment, “I became fully aware that I was actually being stopped because I was perceived as a threat,” Ingram said.

The woman told Ingram that she knew a police officer who lived nearby, he said.

Midway through the encounter, Ingram saw 16-year-old Jacob Meltzer walking up the street. Meltzer said he was on his way to meet friends when Ingram, who he didn’t know, asked him to start recording video on his cellphone.

Ingram said the woman seemed to back off her aggressive questioning when the recording started. In three video clips, Ingram can be seen calmly but pointedly asking the women if she was stopping him because of his race.

“You felt like I didn’t belong, so now I can’t continue my run because you’re stopping me. And I feel that’s truly because I’m a Black male running in this neighborhood,” Ingram said.

“You look pretty good for a Black male,” the driver said.

By the end of the interaction, she seemed to be trying to change the subject, Ingram said. She mentioned something about brain waves and fast-food restaurants.

She finally drove away.

Ingram says he watched her drive past a white jogger without stopping.

‘Running out of tears and anger right now’

Back at Trailside Elementary, Ingram’s wife got a call from her husband. Sounding shaken, he described what happened.

Their teenage son, who two weeks earlier asked his dad to join him at a rally supporting the Black Lives Matter movement in downtown Anchorage, “jumped up, threw his shoes on and said, ‘Where’s my dad, I’m not going to let anyone hurt him,’” Lamebull Ingram said.

Reunited at their car, the family sat stunned.

“DeWayne and I just started crying,” Lamebull Ingram said. “We didn’t know what to do. Our boys were just sitting there, watching us.”

Meltzer, the teenager who’d walked by, sent the video clips he’d recorded on his phone to Ingram, who posted them on Facebook.

Reaction was swift: Within hours, the video clips were shared thousands of times, with hundreds of people expressing outrage and offering support.

The incident has spurred hard conversations at home for Ingram’s family.

“No one should be accosted like he was,” said Lamebull Ingram.

She has thought about their 15-year-old son, questioning how much she needs to worry when he goes out for a run, whether she should ask him to wear workout clothes rather than a hooded sweatshirt.

“Why do I, as a mom, have to worry about what my son wears when he goes for a run?” she said.

Ingram said he’s been grappling with such overt racism in Anchorage, a community he says he has generally felt safe in. He’s also fielding an outpouring of support.

The next day, Sunday, Ingram filed a report with the Anchorage Police Department.

“The complainant told the officer he was making the police report so that the incident was documented in case this type of interaction happened to someone else,” a summary from the Anchorage Police Department said.

On Tuesday, Ingram got a call from a woman named Erica Bunnell.

When the videos circulating on social media had reached Bunnell and her brother, Aaron Savoy, they had felt a sense of dread.

The woman in the SUV is their mom.

“I wanted to apologize for the experience and acknowledge how horrible it was,” Bunnell said about calling Ingram. “We do not condone (what happened). If there is racism in our family line, we are the end of that.”

She also wanted to tell Ingram about her mother.

Bunnell and Savoy say that for at least five years, their mom has been displaying increasingly bizarre and erratic behavior, doing things like destroying cellphones because she believes they have been tampered with, claiming people have removed all the screws in her fence, showing up unannounced at the homes of families her children knew in high school and refusing to leave. She has been banned from businesses around Anchorage, they say.

She does not live in the neighborhood where the encounter with Ingram happened.

Efforts to see her forced into receiving a mental health evaluation have failed because she has been deemed not an immediate threat to her own safety or that of others, Bunnell said. The family hopes the incident will be a catalyst for a court-ordered psychiatric evaluation. They’ve started civil commitment proceedings, Savoy said.

The siblings say they are not seeking to excuse — or looking for the public to excuse — their mother’s behavior, or divert attention from the pain it caused Ingram’s family.

“But I want people to know my mom isn’t just the new racist meme,” Savoy said. “There’s more to the story here.”

Bunnell and Ingram ended up having a long phone conversation.

Afterward, Ingram said he felt reassured that racial animosity was not a part of Bunnell’s “value system.”

“It gives me a little bit of empathy. Because to say things like that, you have to be someone that’s hurting in some way, especially if you go to the extent to stop someone,” Ingram said. Still, the impact of the encounter remains.

“It still hurts, regardless,” he said.

At the end of the conversation, the two talked about staying in touch. Both say they’d welcome seeing a friendship between their families grow out of the wreckage of the encounter.

Update: Support from the community — and a return to the neighborhood

On Saturday, friends and supporters of Ingram’s organized a 1.5-mile event, “We Run With DeWayne,” that retraced his route from a week earlier. Several dozen runners participated. Residents of the neighborhood were ready, with many lining the street and cheering him on, and some holding handmade signs.

Haywood said she hoped a show of support and positivity would be a response to last week’s encounter.

”Let’s make something good out of something bad,” she said.

About 50 runners met in a parking lot near Service High School. Ingram led the group on a run that followed the same path he took a week earlier. Ingram said it was his first outdoor run since the previous week’s incident.

Once the runners reached the Zodiak Manor neighborhood, Ingram found the street had been chalked to read “All welcome,” “Everyone belongs” and other messages of support. Haywood said people in that neighborhood created the display separately after being alerted to the running event on Facebook.

”That was the most awe-inspiring thing I’ve ever seen,” Ingram said.

Kristiann Maclean, who lives on Zenith Street, helped organize the neighborhood response. “We’re just trying to let one particular jogger, and anyone else who’s willing to listen, know that everybody is welcome,” she said. “We’re trying to become active anti-racists.”

After the run, Ingram was smiling underneath his mask, which had the words “faith over fear” written on it. “I lost a little bit of love for running after being stopped like that,” he said. “This definitely brought it back, to see how much support is out here.”