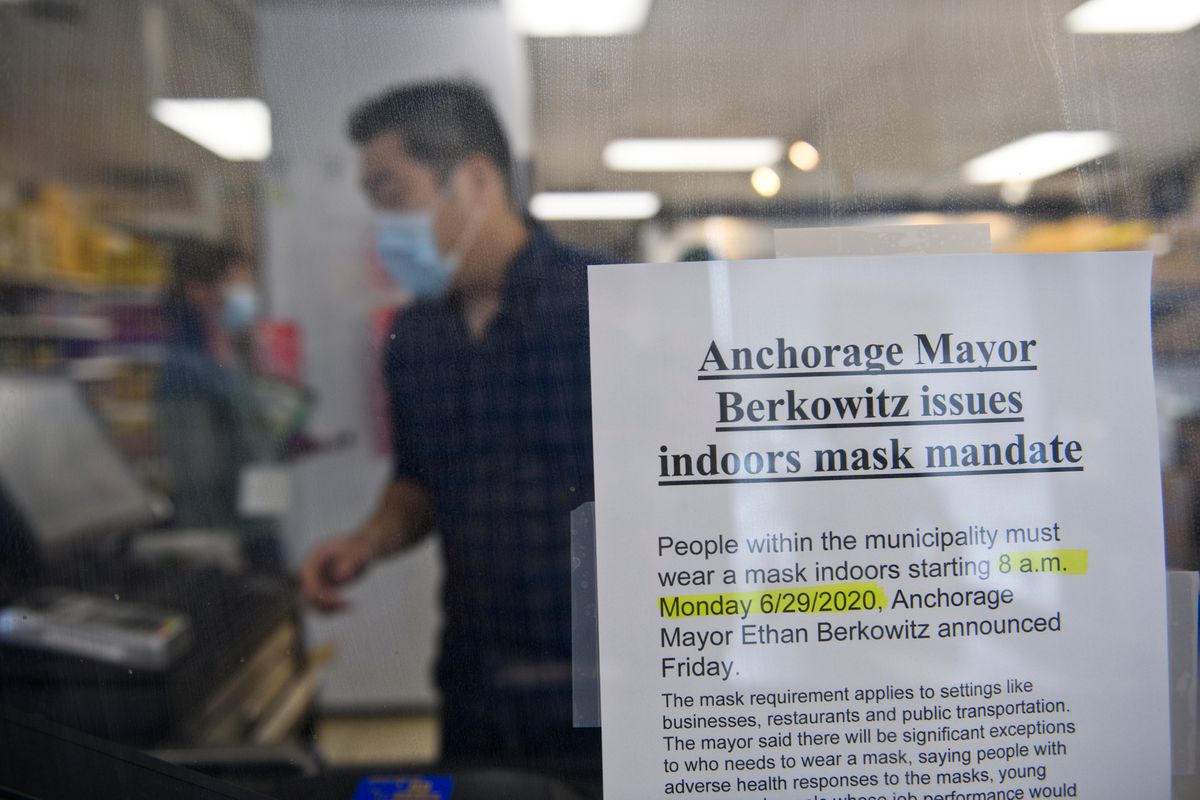 A sign near the checkout stand at Lucky Market announced the citywide order on June 29, 2020. “It’s good for everybody," said manager Danny Kwan. "We will just follow the city order and we hope everyone will be okay.” (Marc Lester / ADN)

A sign near the checkout stand at Lucky Market announced the citywide order on June 29, 2020. “It’s good for everybody," said manager Danny Kwan. "We will just follow the city order and we hope everyone will be okay.” (Marc Lester / ADN)

On Monday, Anchorage joined a growing number of U.S. cities by requiring masks for indoor public spaces to address the spread of COVID-19.

Whether it was a bandana, surgical mask or homemade cloth masks, Anchorage business owners interviewed Monday said customers ran their errands with face coverings in greater numbers than seen the past few months. Compliance was not universal, something Anchorage Mayor Ethan Berkowitz predicted when announcing the order on Friday.

Visits to several businesses in Spenard, Midtown and South Anchorage on Monday found most customers were wearing masks, although usage varied from store to store.

“Out of respect, we need to wear masks,” said Carol Statton, a nurse who was shopping at Over the Rainbow Toys on Monday. “It’s the least we can do. It’s not 100%, but it’s pretty good.”

Janet Gregory, owner of the toy store, said she was glad to see the order. She’s been requiring masks since she reopened June 1. It’s that or she closes up, she said, because she wants to keep her employees safe.

“That takes the policing off of me and my staff,” Gregory said.

Although masks have become increasingly political, more and more government leaders are looking to them as a tool to allow businesses to operate at full capacity, citing emerging evidence of their effectiveness at slowing the spread of COVID-19.

On Saturday, U.S. Health and Human Services Secretary Alex Azar spoke about the importance of wearing masks in certain situations:

“We need to wear our face coverings if we’re in settings where we can’t social-distance, particularly in these hot zones,” Azar said on NBC’s “Meet the Press.”

“His answer for S.C. is the same as the answer for Alaska,” Clarkson said in the tweet.

Gov. Mike Dunleavy has not implemented a mask mandate statewide, and on Friday, Clarkson issued a memo to state employees saying Anchorage’s mask order doesn’t apply to state buildings. However, Dunleavy said in a statement Monday that he does not oppose the local mandate.

On Monday, Municipal Attorney Kate Vogel challenged Clarkson’s memo, saying Anchorage has the authority to institute the mask order in all buildings within its jurisdiction.

Some business owners in Anchorage question their role in implementing the rule.

Michelle White, owner of Sun Kissed Alaska tanning salon, said she finds masks suffocating and can’t wear one. She can’t tell customers to wear one if she herself isn’t, she said.

On Monday, about half of the customers going in and out of Alaska Leather, a motorcycle apparel shop, wore masks. Owner Bonnie Welsh said that was up from about 20% last week.

Welsh wore a mask, and sells masks, but her two employees working cash registers were not.

“The mandate does put a lot of pressure on business owners,” Welsh said. “I know that I’m not going to force people to wear masks.”

Welsh has a sign on the door asking people to wash their hands in the bathroom, stay away if they are sick and practice social distancing.

The sign also says “Face masks/gaiters are your choice - this is AMERICA!”

The city’s emergency order says businesses will not be fined for lack of compliance by customers as long as they have a sign stating that customers are required to wear a mask.

The policy does state employers are responsible for making employees wear a mask.

“Absolutely not my place to enforce this,” said Welsh. “I hope that people want to comply, but I’m not going to ask them why they don’t have a mask on.”

[Seward, ‘at the precipice’ of a major COVID-19 outbreak, cancels Fourth of July celebration]

Welsh said her clientele tends to have an independent streak.

“There’s a lot of different kinds of bikers, but you know the crusty, old, hardcore biker dudes, they’re like ‘go shove it,‘ ” she said of masks.

Several businesses voiced concern that the policy could put them at odds with customers, either having to deal with people not wanting to wear a mask, or missing out on sales.

Peter Johnson, manager of Paramount Cycles, said 90% of customers have been wearing masks. Right now, he’s not planning on stopping customers who aren’t wearing a mask, but said that policy could change.

“I don’t have masks to give out to people,” he said. “So as a business there’s that tradeoff of I’d like somebody to come in and buy a nice bike, and I don’t want to miss that by not letting somebody in. But, of course, it’s a pandemic and I do care about that and take that seriously too.”

Everyone in Title Wave Books had on a mask during a visit Monday morning. Owner Angela Libal said last week, about 60% of customers wore a mask.

She said she was worried about customers giving staff pushback about the mask requirement, but in the first two hours on Monday, only one person came in without one. An employee staffing the door gave the customer one, which they wore while in the store.

Still, she said, the policy does place a burden on business owners. She already had an employee dedicated to sanitizing surfaces hourly. Now she needs another one to stand at the door to make sure people have masks.

“The mayor has put us in a bit of at tricky spot,” Libal said. “We kind of do have to be the gatekeeper.”

Libal said if someone is defiant about the mask policy, she will suggest they opt for curbside delivery, mail order or have a friend come by and pick up whatever books they want.

“It puts a lot of responsibility on the business,” she said.

Jun Kwon owns King’s Cleaners on Huffman Road. He said if it makes people feel more safe, he’s fine with it. He hasn’t yet had a conflict with a customer about masks, he said.

Danny Kwan, manager of Lucky Market, an Asian grocery store on Arctic Boulevard, said sometimes customers leave their masks in the car, and he just reminds them they are required to be in the store. So far, there have been no issues. Eventually people will just get used to it, he said.

“It’s good for everybody,” Kwan said. “We will just follow the city order and we hope everyone will be okay.”