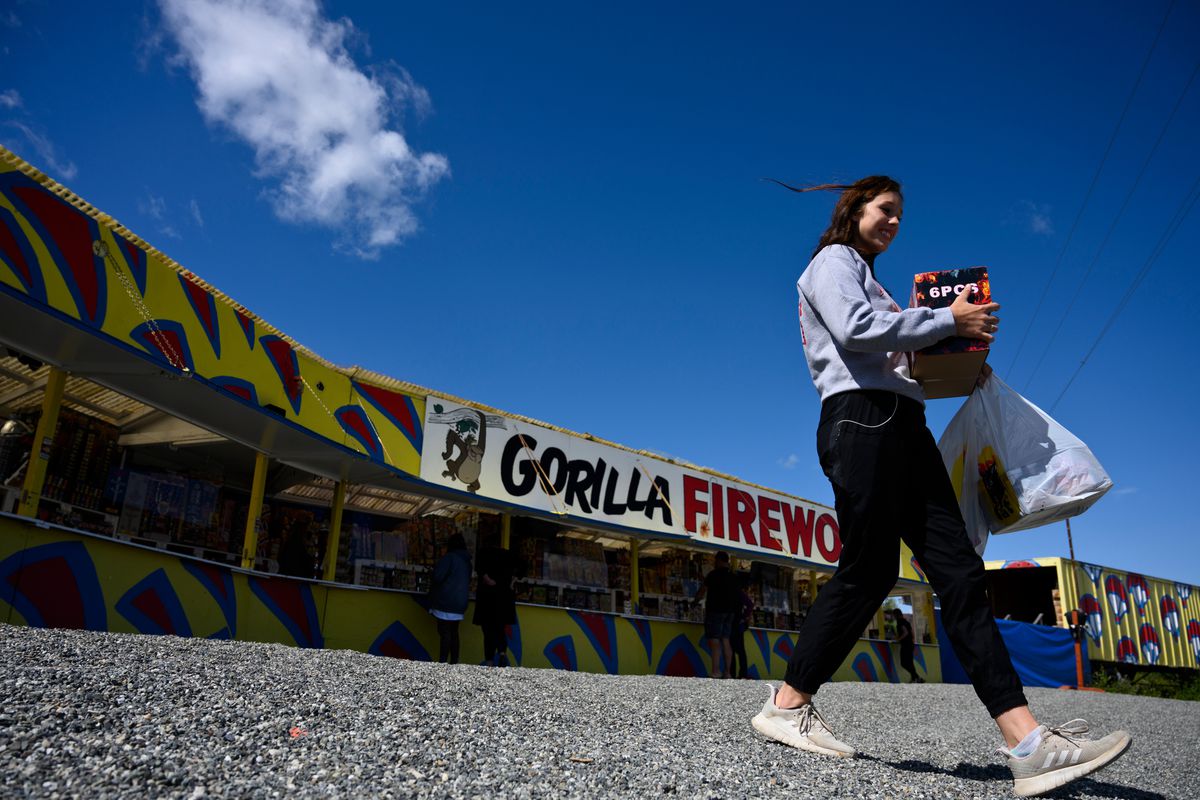 Karlie Anderson carries her purchases away from Gorilla Fireworks in Houston on Tuesday. (Marc Lester / ADN)

Karlie Anderson carries her purchases away from Gorilla Fireworks in Houston on Tuesday. (Marc Lester / ADN)

With Fourth of July fireworks shows across Alaska canceled because of concerns over the spread of COVID-19, officials are anticipating more Alaskans will light up the sky with personally purchased bottle rockets and sparklers.

Personal fireworks use is banned in most communities in Southcentral Alaska, as well as in state parks and on public land. But reports of fireworks going off on the Fourth of July pop up every year throughout the region, causing concern for some fire officials during Alaska’s peak wildfire season.

The city of Houston in the Matanuska-Susitna Borough is an exception to the prohibition, with fireworks permitted on private land with landowner permission.

Robert Hall, owner of Gorilla Fireworks in Houston, said that more families seem to be planning their own celebrations this year as nearly every large public event in the state has been canceled. He said he’s seeing a significant number of smaller sales this year because families are planning to celebrate on their own.

“People are just itching to go out and do something that they can do with their family and a small group outside,” Hall said. “It’s a wonderful way to kind of celebrate their freedom. And so we’re finding that customer excitement is higher than ever, because they finally get to go do something.”

Hall knows that many of the fireworks he sells leave the Houston area, but he said he hopes customers are responsible while using them, both for their own safety and so they prevent wildfires. He said he’s been communicating frequently with fire officials, who are concerned the lack of traditional events and gatherings may lead to an increased number of people purchasing and lighting off fireworks from home — whether or not it’s legal.

Anchorage Fire Marshal Brian Dean said that around the Independence Day holiday, firefighters respond to “a ton of calls every year.” The Municipality of Anchorage bans the use of all fireworks, even sparklers, during the holiday and offenders can face fines of several hundred dollars.

In the Mat-Su, Fire Deputy Director Brian Davis said there are typically more emergency calls during any holiday weekend because there are more people traveling to the borough to recreate outdoors. He said he believes that the people who normally light off fireworks in areas where it’s not allowed will likely continue to do so, but he hopes there won’t be more people going against regulations this year than in previous years.

Gorilla Fireworks, which occupies a long wooden booth on a dirt and gravel lot along the Parks Highway, has implemented pandemic precautions. Hanging plexiglass barriers divide cashiers and customers, and Hall said he ordered thousands of disposable masks to ensure there would be enough to keep customers safe. He even masked the large inflatable gorillas outside the booth, he said.

Last year, Gorilla Fireworks didn’t open for the Fourth of July holiday because of wildfires throughout the state, Hall said. He hasn’t been advertising fireworks sales this year because of concerns that there may be an excess number of fireworks going off in areas where they’re banned.

Alaska is in prime wildfire season, and Division of Forestry spokesman Tim Mowry said that conditions are expected to dry out across Southcentral as the weekend approaches. Wildfire danger decreased in Interior Alaska during the last few weeks because of significant rainfall, Mowry said. But high temperatures are expected to continue into the weekend, which Mowry said could lead to somewhat dry conditions in Southcentral that could aggravate fire risks.

“We get fires that start every year from fireworks — not just on the Fourth of July, but obviously there’s more people doing that than ... there would normally,” he said.

Whatever Alaskans choose to do on the Fourth of July, fire officials agree that they hope people are responsible and safe — not just with regard to wildfires, but also driving and recreating. Davis, with the Mat-Su Borough, said roads will be busier this weekend and he wants anyone recreating on the water to remember to wear a personal flotation device.

Mowry noted that campfires and grills can also cause fires, and he said it’s important that any fire is thoroughly extinguished before left unattended.

“We just want people to be safe, not just in terms of wildfires but for their own safety, and for their children’s safety too,” he said.