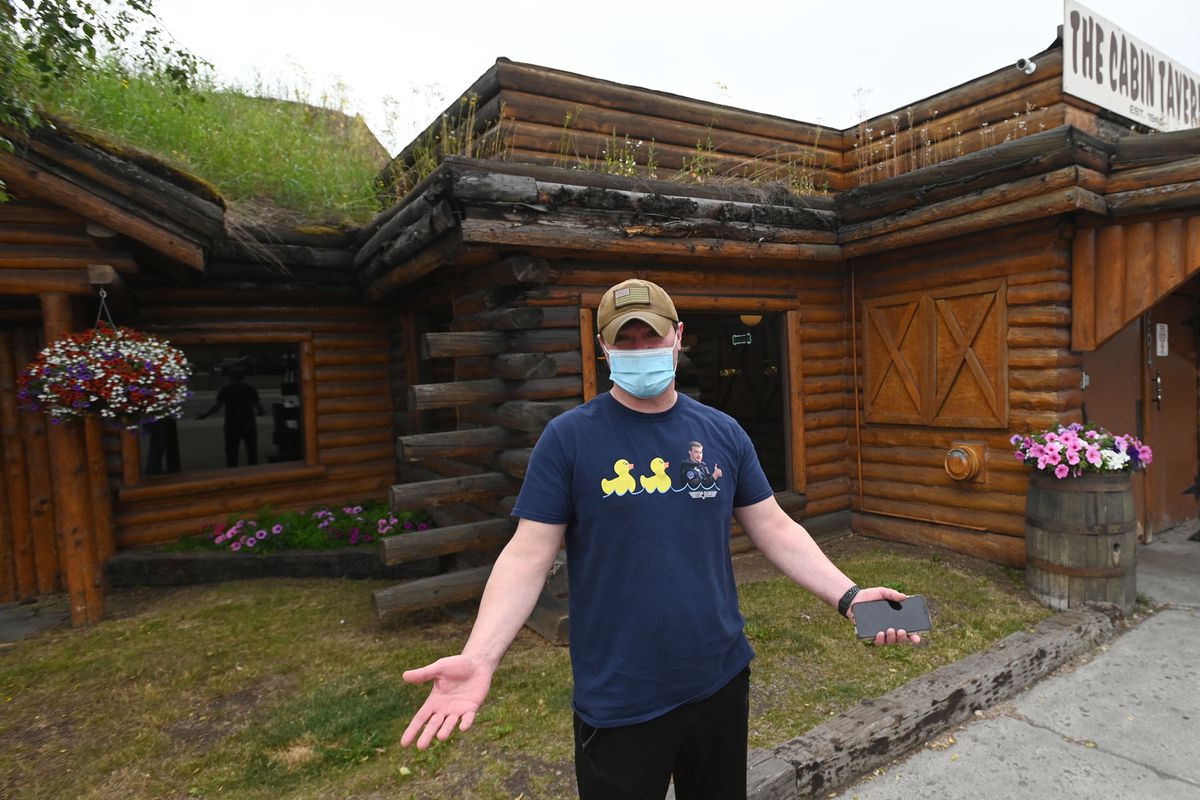 “I feel like the bar industry is being singled out,” said bartender Saverio Logatto outside The Cabin Tavern in Muldoon on Monday, July 6, 2020. (Bill Roth / ADN)

“I feel like the bar industry is being singled out,” said bartender Saverio Logatto outside The Cabin Tavern in Muldoon on Monday, July 6, 2020. (Bill Roth / ADN)

Still reeling from an eight-week closure this spring followed by weeks of mandated limited capacity, Anchorage bar owners looked to the summer as a way to get back on track during the COVID-19 pandemic.

But after city and state leaders lifted business restrictions and COVID-19 case numbers rose, the Municipality of Anchorage on Friday released a list of bars where people with the coronavirus spent an extended period of time.

The next day, July 4, usually brings throngs of partiers to local watering holes.

“We just had the slowest Fourth of July weekend in history,” said Danny Zivanich, owner of F Street Station and Cabin Tavern. “That’s 39 years. I bet you every bar in town is the same way.”

F Street Station and the Cabin Tavern are among the 17 Anchorage bars and other establishments where between one and eight people believed to have the virus visited in mid- and late June, according to the city. Both of Zivanich’s bars were identified as being visited by two people with COVID-19.

Zivanich and other bar owners on Monday said they think bars were singled out, while other businesses may have had multiple instances of COVID-19 exposure, but the city has not released their names.

“They blame the bars for everything,” Zivanich said. “Why don’t they name every business where people get the coronavirus, not just the bars?”

The naming of locations came after the city announced it had maxed out on its ability to contact trace. In its Friday announcement, the city said it hasn’t been able to identify and reach every person who might have been in contact with the infectious people at the bars, and it urged people who visited the establishments during the exposure period to monitor for symptoms.

It is time to pull back and slow down. Don't go to indoor bars, pick up food instead of dine in, air hugs instead of real hugs, elbow bumps instead of handshakes. Take care of your physical and mental health while minimizing the spread of COVID. 6/

Anchorage Health Department Director Natasha Pineda on Wednesday called bars a “high-risk” setting. She said in recent weeks, people who are contagious have visited several businesses, including bars, where they potentially came in contact with more than 100 people.

Dr. Bruce Chandler, the city’s medical officer for disease prevention and control, said at the same briefing that people at bars often don’t wear masks, and they get close to each other and sing and dance.

“I have great concern for the safety of the people who work in the bars,” Chandler said. “They’re really working in a danger zone.”

City officials were not available for interviews Monday, said Carolyn Hall, spokeswoman for Mayor Ethan Berkowitz. The city did not respond to emailed questions from the Daily News.

Hall said she is not aware of the city previously naming a business where the virus potentially spread, other than discussing an outbreak at the Providence Transitional Care Center in May and June.

On Friday, Sen. Shelley Hughes, R-Palmer, said on Facebook that Berkowitz “crossed the line” in naming the bars, and encouraged the owners to take “whatever legal recourse necessary.”

By Monday, the post garnered almost 300 shares and more than 700 comments, many of which were critical of Hughes. Hughes did not respond to a request for an interview.

The state’s hospitality and entertainment industry trade group issued a statement on Monday evening criticizing the city’s decision to release the names of bars that had exposure, while not naming points of exposure in other business sectors.

“Alaska CHARR finds it extremely concerning that to date, the only business types listed are those in the hospitality industry — namely bars and restaurants,” Alaska Cabaret, Hotel, Restaurant and Retailers Association President Sarah Oates said in the statement. “It appears as if one industry — arguably that which has been most devastated by this pandemic — is being unfairly targeted, at a time when public exposure is occurring in many other types of establishments, settings, and public gatherings.”

Oates said her organization had worked with the city to implement new guidelines for bars and restaurants to help slow the virus.

The Anchorage Moose Lodge No. 1534, which the city said Friday had eight cases of exposure, has since temporarily shut down. The establishment is different from most bars in that it’s a private club. Moose Lodge Gov. Jamie Miller said the organization has worked hard to implement safety precautions such as mask-wearing and physical distancing.

Pineda last Wednesday said during the community briefing that if businesses didn’t announce the exposures to customers, the city would step in.

Miller said he isn’t aware of the city having any communication with the Moose Lodge, and he didn’t find out about the eight case visits until the city publicly announced it.

“I believe it could have been done a different way,” he said.

Miller said the organization is serious about protecting its members. He sees people around town in grocery stores and other businesses not wearing masks. While he said he can’t speak for the entire organization, he said he personally didn’t appreciate the city putting a spotlight on one sector of the economy.

“I felt it was kind of an unfair way to just segregate one part of an industry,” he said. “It would have been nice if we’d seen it in advance, just so we can let the city know what we’re doing.”

Jerry Buffington is owner of the Panhandle Bar and part-owner of JJ’s Lounge, both of which the city says had six case visits.

Buffington said he and his employees are washing their hands and cleaning surfaces. When a bartender tested positive last month, they shut down for about a week to clean.

“We are doing everything right here,” he said. “If everybody was doing what we do, everything would be all right.”

He said he’s trying to take care of his customers and follow the guidance put out by the city. If a new precaution is advised, he’ll implement that too. He said his customers, for the most part, are behaving safely.

“We are doing a pretty good job at that,” he said. “Most of them like the compliance factor. Those that want to disagree, go and take a walk down the street.”

John Pattee, owner of the Gaslight Bar, said he thinks naming the bars is not fair.

“It seems to me that it was never (the mayor’s) intent to try and curve the COVID, but his intent was to close bars,” Pattee said.

Pattee said he’s followed the city guidelines and implemented social distancing policies. Over the holiday weekend, business was down about 60%.

Pattee said after bars were singled out, everyone is looking at the industry as the bad actor.

“Just pointing out the bars, and kind of giving us a scarlet letter on our forehead,” he said. “It’s wrong. If you are going to start naming places, name them all.”