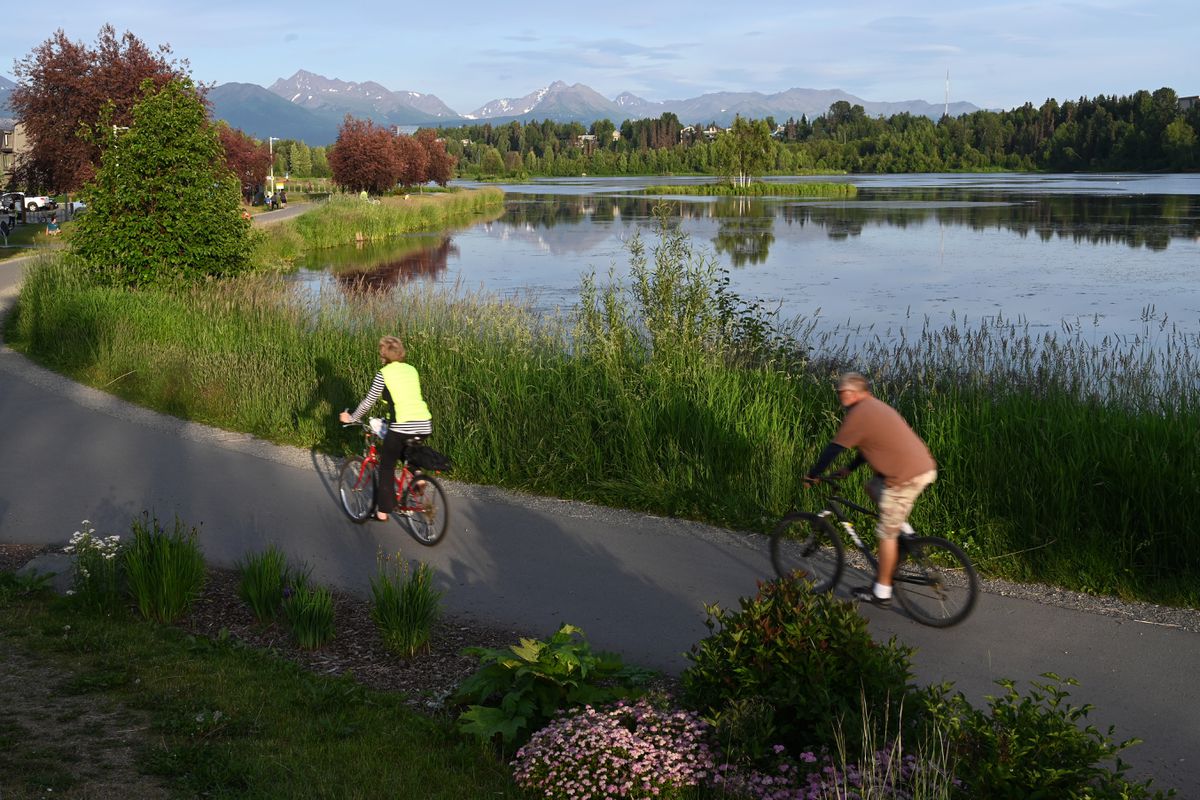 After I’d written 27 consecutive news stories related to the coronavirus, an email landed in my inbox one day in the spring.

“Bike the Moose Loop,” it invited.

The Anchorage Park Foundation, the message explained, had launched an effort to get people to bike a 32-mile loop roughly connecting the Coastal Trail, Ship Creek Trail, Campbell Creek Trail and Chester Creek Trail in the shape of what could — with some squinting — be seen as the outline of a moose.

Immediately, I asked my editor if I could write a story about the Moose Loop. Clearly, I would have to go on the ride myself.

He said yes. As the weather improved, pandemic-weary people in Anchorage were desperate for safe outdoor activities. An epic bike ride around the city seemed like something our readers might be interested in.

Cities from Tucson to Portland promote their interconnected trail systems as an urban amenity and even a tourism draw, Nordlund said. Where many cities have reclaimed industrial areas along rivers to built bike paths, Anchorage’s greenbelts were largely already set aside as the city was developed.

“In our greenbelts, you are in this beautiful, lush space. You could be a block from a Fred Meyer and never know it,” Nordlund said.

The major trails along the Moose Loop do not seamlessly connect — there are neighborhood pockets between the established trail systems where riders need to make the connections. The Anchorage Park Foundation hopes that if more people ride the loop, they’ll be willing to push for funding that would connect those gaps.

“I’m choosing to believe it will become a thing,” said Nordlund.

My biking partner was Anne Raup, the Anchorage Daily News photo editor and a person who loves biking so much she rode across the state of Missouri for her vacation last year.

I am a 36-year-old mother of three young children who enjoys biking but not in any serious kind of way. I have never biked across a state. Until that day, I had never even biked across Anchorage.

Anne was game to bike 32 miles around Anchorage on a sunny, windless Wednesday. Who wouldn’t be?

We set out at noon from Westchester Lagoon, where the 9.5-mile Coastal Trail meets the Chester Creek Trail. I rode my husband’s new mountain bike — one of the last models the bike shop had in stock, after a spring run on bikes during the pandemic. Soon we were zooming along a familiar stretch of trail where the tony homes of Bootlegger Cove meet outer downtown. In summer, this part of the trail can be busy with tourists on mild rambles from the downtown hotels. On this day, there weren’t any tourists.

Past Elderberry Park, the trail petered out and we rode into the Ship Creek area, Anchorage’s industrial heart.

If Nordlund could magically change it, this awkward few blocks between the Coastal and Ship Creek trails would be connected, or at least feature some signs.

Unless you spend time fishing at the creek, you might not intuit that the underrated Ship Creek trail picks up underneath a bridge, near the Ulu Factory, right beside a dumpster that says “Don’t Even Think About Putting Anything Fishy In Here …” Noted.

The Ship Creek Trail is classic Anchorage: It weaves through the historical heart of the city, blending glimpses of industrial yards and shipping containers with the quiet gurgling of a productive salmon creek.

Because I am a reporter who often covers crime, I had been on the trail before.

In 2016, a 40-year-old loner named James Dale Ritchie shot two people near a graceful bridge across the creek. Since then, the trail had seemed lonely and haunted to me. It felt hopeful to revisit the place and see it for its quiet beauty, not its sad history. This would become a theme during our bike ride. Sometimes we found ourselves pedaling places I’d only ever visited in tragedy or mayhem, for work, noting how different they seemed without police tape.

We climbed a modest hill and ended up at William Tyson Elementary in Mountain View. Then we discovered one of the unexpected joys of the journey: The neighborhood of Mountain View has bicycle boulevards, wide residential streets you can bike right down.

We popped out at Louis Mizelle Park. This would be a great time to stop and eat at one of Mountain View’s many restaurants. You could get Lao chicken wings, or the Nuuini Combo at Hula Hands, or many other delicious things. We passed the most action-packed Holiday Superstation in Anchorage and continued across to McCarrey Street, where a bridge carried us over the rushing traffic of the Glenn Highway.

We followed McCarrey on one of our longest street-riding stretches until we made it to Polar Bear Playground, a destination playground I have driven my children across town to play at solely for the slide. It looks like a giant polar bear with a bluish tongue.

On the west side of Russian Jack Springs Park, we connected to a trail system that eventually delivered us to the Alaska Native Medical Center campus and the popular University Lake dog park. Now in the U-Med district, we began to see medical workers in scrubs walking the trails and passed one of the testing sites for COVID-19.

The Campbell Creek Trail officially starts as soon as the bike path crosses a bridge over Tudor Road, and soon bikers find themselves at the Chuck Albrecht Ball Fields.

At Lake Otis Parkway, we faced the most jarring disconnection of the whole ride. There’s nowhere really safe to cross the street, and many bicyclists don’t take the time to ride up to the established crosswalk at the corner of Lake Otis and Tudor or to take the tunnel that’s a couple of blocks south. That’s one of the priority spots for establishing a safe trail connection, Nordlund said.

From there, we biked through a tucked-away neighborhood, and through the Tudor Elementary School playground. Then we reconnected with the Campbell Creek Trail, which boasts some of the most verdant and wild-feeling stretches of the whole ride.

Soon we began to develop a thirst, so we stopped at the Peanut Farm. For both Anne and me, it was the first time in months we’d been to a restaurant.

We sat on the deck and ordered a healthful barley tonic — read: beer — and listened to the creek rushing by, feeling momentarily like the luckiest workers in Anchorage.

The Campbell Creek Trail, between the tunnel under the Old Seward Highway and where it ends miles southwest of there, crosses the remote-feeling Campbell Creek many times, cuts through birch forests and cruises alongside Taku Lake.

We whizzed down Northwood Drive, the busiest road-riding portion of the route, to the Raspberry Road bike lane. It was at this point that my legs started to hurt. With Anne’s gentle encouragement and lots of snacks, we made it to the Kincaid Chalet, where we ran into someone we knew, because this is Anchorage.

The portion of the Coastal Trail between Kincaid and Point Woronzof is one of the quietest, most remote stretches of the whole ride, and also one of the most beautiful. We glimpsed Fire Island, low tide on the mudflats, a moose mother and calf off the trail. To my surprise, I pedaled right past the turnoff to my house and decided to keep going, back to Westchester Lagoon, where we’d started hours earlier.

Our route didn’t follow the exact Moose Loop. But that was fine. It is gratifying to relearn just how extensive and interconnected Anchorage’s trail system is, just how quiet and green the heart of the place is.

And simultaneously, how alive: teenagers on skateboards, carrying speakers blasting music. Dads pushing strollers. Preschoolers with training wheels on their bikes. Rollerbladers. Rollerskaters. A guy on a Segway scooter, which apparently still exist. A woman walking with her cat in a special backpack for cats, which also exist. Women in Kincaid Park gathering dandelion greens in grocery bags.

We saw sandhill cranes, geese, grebes, ducks, robins, white crowned sparrows and gulls, heard the distinctive song of a Swainson’s thrush. We rode through clouds of marijuana smoke, the smell of laundry in nearby dryers, spruce forest, wildflowers, stands of invasive European bird cherry, past mansions and homeless encampments.

Anchorage is often said to be a city at the edge of the wilderness. The Moose Loop is not a ride through wilderness, but instead a route that reveals what, to me, is the compelling juxtaposition of Alaska’s biggest city: a fundamentally wild place where people live in all sorts of interesting ways.

Though my legs were sore by the end, it was also not that hard. If I can do it, so can you.