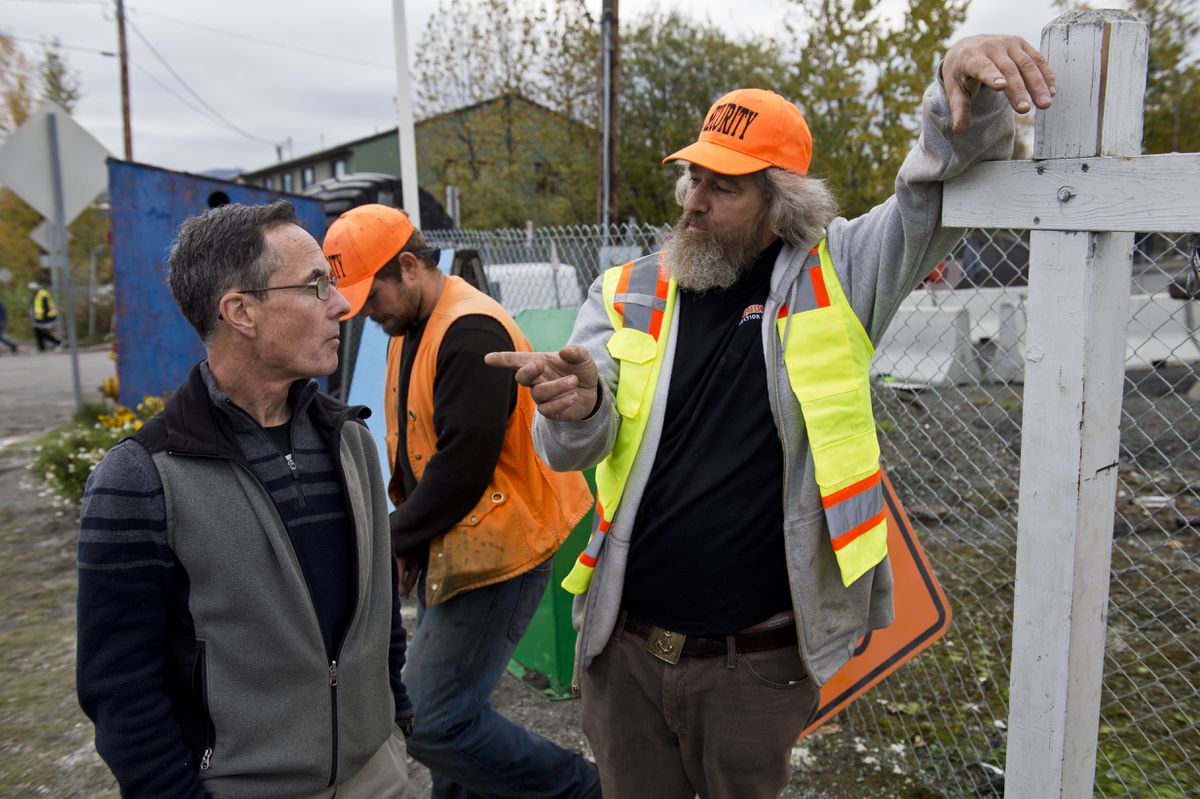 Ron Alleva, right, talks with Anchorage Assembly member John Weddleton. Alleva, who own property and a business next to Bean’s Cafe and the Brother Francis Shelter, sued the organizations in 2018. (Marc Lester / Alaska Dispatch News)

Ron Alleva, right, talks with Anchorage Assembly member John Weddleton. Alleva, who own property and a business next to Bean’s Cafe and the Brother Francis Shelter, sued the organizations in 2018. (Marc Lester / Alaska Dispatch News)

The Alaska Supreme Court has ruled in favor of Bean’s Cafe and the Brother Francis Shelter in Anchorage by upholding a lower court decision that threw out a lawsuit brought by the owner of a neighboring business.

Ron and Annette Alleva sued in 2018, saying “illegal activities” by the users of Anchorage’s largest soup kitchen and homeless shelter “severely and negatively impacted” their ability to use their neighboring property.

A Superior Court judge dismissed the lawsuit, but the Allevas appealed. Upholding the Superior Court’s decision, the five justices of the state high court said the Allevas were barred from bringing their case because of the terms of a prior lawsuit.

“That’s a big disappointment, because it shouldn’t have been a rubber-stamp repeat,” Ron Alleva said.

In 2012, the Allevas collected $30,000 from the homeless shelter, Municipality of Anchorage and Bean’s Cafe in a settlement that said they would “further waive, release and discharge any future claims” relating to the behavior of the people who use the soup kitchen and homeless shelter.

Attorneys representing the Allevas argued that the behavior in the newest lawsuit took place after that agreement, after the shelter and soup kitchen expanded.

By phone, Alleva compared the situation to someone who moves in next to a quiet airport, only to see the airport expand and put in a large jet runway.

The justices disagreed with that interpretation.

The Allevas, who own and operate Grubstake Auction Company nearby, have consistently opposed and criticized the city’s anti-homelessness policy. In addition to the 2012 and 2018 lawsuits, Ron Alleva was fined $35,000 for spreading chemicals on the ground near the soup kitchen and homeless shelter.

The state, which brought charges in the case, argued that the chemicals could have blinded or injured the public.