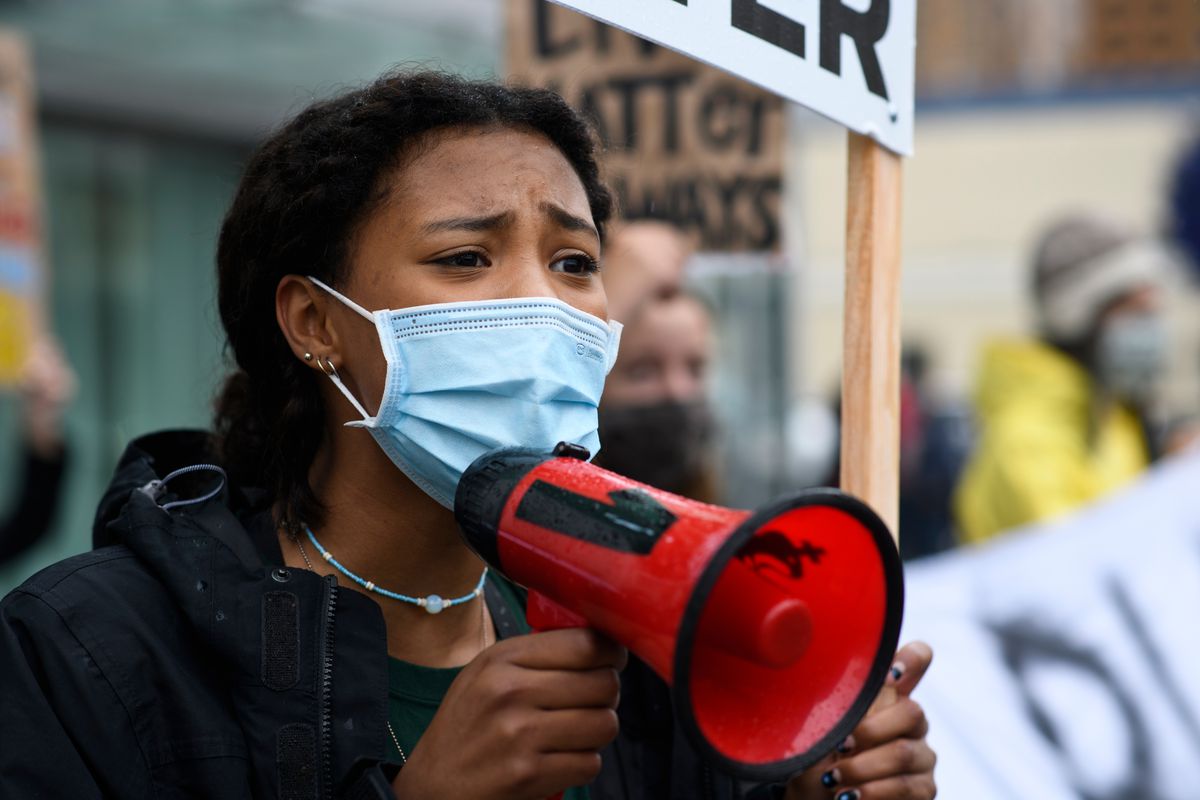 Marching through the rain with a megaphone held to her masked face Friday, Madisen Talton found her voice. The 17-year-old from Eagle River led a 13-person demonstration against racism on downtown Anchorage streets.

“No justice, no peace. No racist police,” she yelled.

Talton said she had been wanting to organize a protest in support of the nationwide Black Lives Matter movement since spring. She got help putting it together as a participant in the Outer Coast Summer Seminar for high-school-aged students. This is the first of three protests she organized as a service project for the program with two other Outer Coast students, Emma Waters, 17, and Camas Oxford, 15.

Talton said leading the gathering required stepping out of her comfort zone.

“Usually, I’m really shy and I’m so scared to get any backlash whatsoever,” Talton said. “But I feel like the Black Lives Matter movement, it really inspired me to get out of my shell and just be loud.”

On Friday, she was loud.

Talton led the way as the small group of teens walked from the Delaney Park Strip to Fourth Avenue. There, the group paused along the curb in front of the Anchorage Police Department headquarters.

“You should be allowed to walk alone and not be afraid,” Talton shouted into the megaphone toward passing cars and pedestrians, her voice growing raspy from chanting. She encouraged passers-by to engage in difficult conversations, educate themselves about inequality and to say the names Breonna Taylor and George Floyd, two Black people who were killed by police this year, leading to widespread protests across the nation.

“We are supposed to believe in our police officers to do their job,” she said.

[Earlier this summer: At Palmer and Anchorage rallies, demonstrators call for unity and stamping out racism in local communities]

Talton said her experiences growing up in Eagle River motivated her desire to speak out. She often felt like the “black sheep” in the classroom as the only person of color, she said. Talton, who identifies as Black, Filipino and white, said kids made mean comments about her appearance.

“It’s really hard for me to sit back in a very privileged community and watch people all over the country in pain like this,” Talton said. “And as a person of color, I’ve dealt with racism my whole life, and I’m only 17.”

Once back at the Park Strip, the group lined I Street to hold their signs and chant. One motorist extended a middle finger at the teens, but many more drivers honked their horns in support and raised their fists in solidarity. Erica Gibbs, of Big Lake, said she felt moved to stop and join them.

“We need to pay more attention (and) listen more to their voices,” Gibbs said of the group.

When it was over, Talton said she felt “beyond proud” and grateful for people who joined her. She said the project had an impact on her.

“I think it really inspired me to be a more active part of my community, no matter how scared I am,” she said.

The group plans to meet again Saturday in front of Anchorage police headquarters on Fourth Avenue and at Eagle River Town Square Park on Sunday.