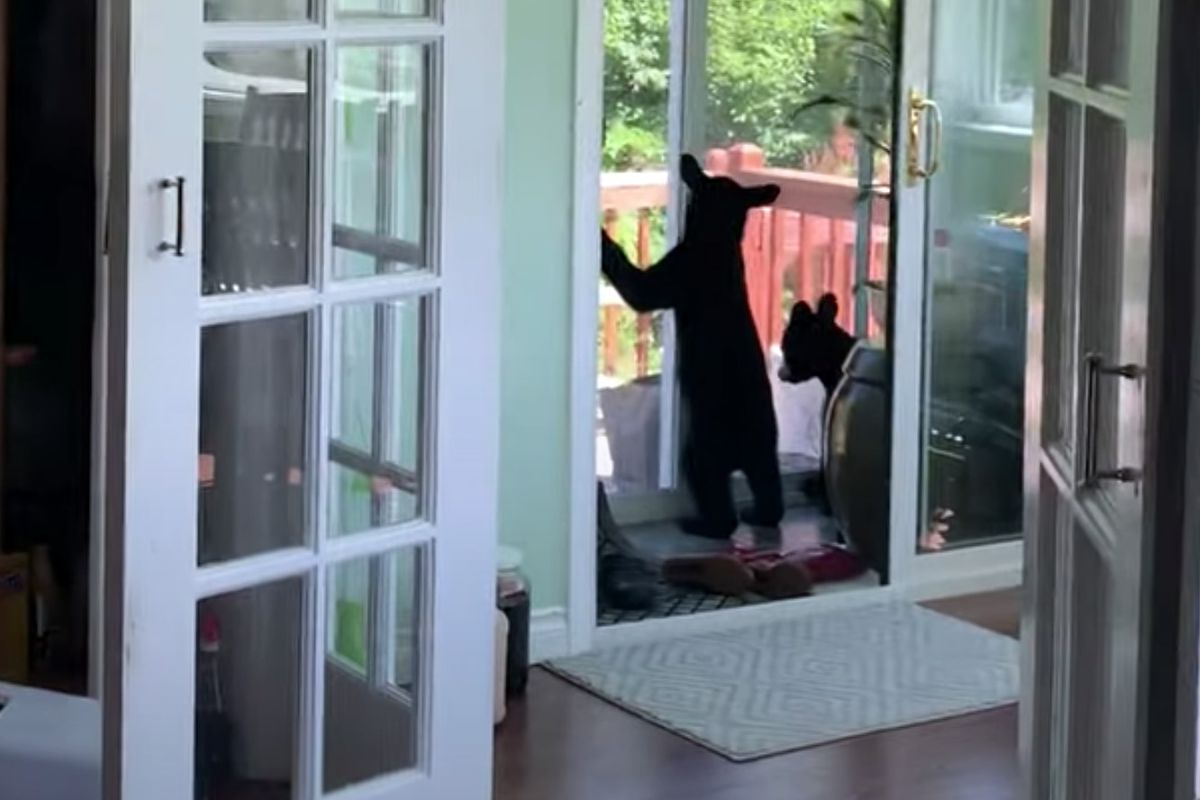 The cubs try to get out the closed door. One of the cubs managed to slide the door open and they left the house. Three black bear cubs were briefly trapped inside an Anchorage Hillside home Thursday, July 23, 2020. (Screenshot of video made by Yulim Kim)

The cubs try to get out the closed door. One of the cubs managed to slide the door open and they left the house. Three black bear cubs were briefly trapped inside an Anchorage Hillside home Thursday, July 23, 2020. (Screenshot of video made by Yulim Kim)

Yulim Kim heard the commotion before she saw the cause.

She was upstairs in her family’s Anchorage Hillside home on Thursday when her mother began screaming. Unsure what was happening, 22-year-old Kim walked down into the living room and saw three black bear cubs inside their house.

She whipped out her phone and started recording, thinking that no one would ever believe this happened.

“I just kept filming because in my head I was thinking at least there’s evidence,” she said.

Kim’s mother, Sang Hyun, had left the back door open briefly that afternoon as she walked out to the garden of their home on Upper DeArmoun Road. As she was heading back inside, she saw an adult black bear in the back entryway.

The bear walked out the door and Hyun quickly walked inside, Kim said. It wasn’t until she was back inside, with the sliding glass door closed, that she saw the cubs.

Hyun began screaming at the bears in Korean, edged toward the front door and then went outside, where she yelled for her daughter, who was visiting home during her summer break from college in Atlanta.

When Kim got downstairs, one of the cubs was in the kitchen digging through the trash can. It later climbed onto the sink and knocked over dishes as it pawed at the window. The other two cubs were in the entryway.

Kim remained calm though she felt panic, she said.

She continued to speak to her mother, who was watching from outside and directing Kim to slide open the back door.

“I was too scared to do that,” she said.

After about a minute, one of the cubs is seen in the video nudging open the sliding glass door and two cubs ran out. The third flopped down from the countertop and rushed out the back door.

Kim walked toward the door and saw the sow waiting at the bottom of the porch for its cubs. Kim yelled to let her mother know the cubs had made it outside and all the bears were walking away from the house.

Kim shared the video online and has received thousands of comments.

The family has seen bears near their house many times in the 13 years they’ve lived there, Kim said. This is, however, the closest encounter Kim said she’s ever had.

Looking back at the video, Kim notes how adorable the cubs are but said she knows she’s lucky the situation ended peacefully.

“Thank God the mama bear wasn’t in the house with us,” she said. “It would’ve been a completely different story then.”

Alaska Department of Fish and Game wildlife biologist Corey Stantorf said it’s important to give bears a wide space if you encounter them — especially if cubs are around.

“Black bears typically don’t defend cubs from humans, but you don’t want to put yourself in that situation to even have the sow think she needs to defend her cub, so just turn around and go back from where you came,” he said. “Increase that distance, but don’t run away because if the mom is there and sees that, it could trigger a chase response.”

Stantorf said that while an encounter like this is rare, “it could happen to anyone.”

“Bears are looking for food right now, they’re on a continual hunt,” he said. “Even if it’s not trash day, and things are in the garage, you’ve got to secure those attractants like dog food or trash because the bears aren’t going to pass up an opportunity if something smells good to walk into a garage and open up a freezer or grab a bag of dog food. And we don’t want to teach bears these behaviors.”

Anyone who has an unusual encounter with a bear is urged to contact Fish and Game, Stantorf said, so that the department can keep an eye on the animals.