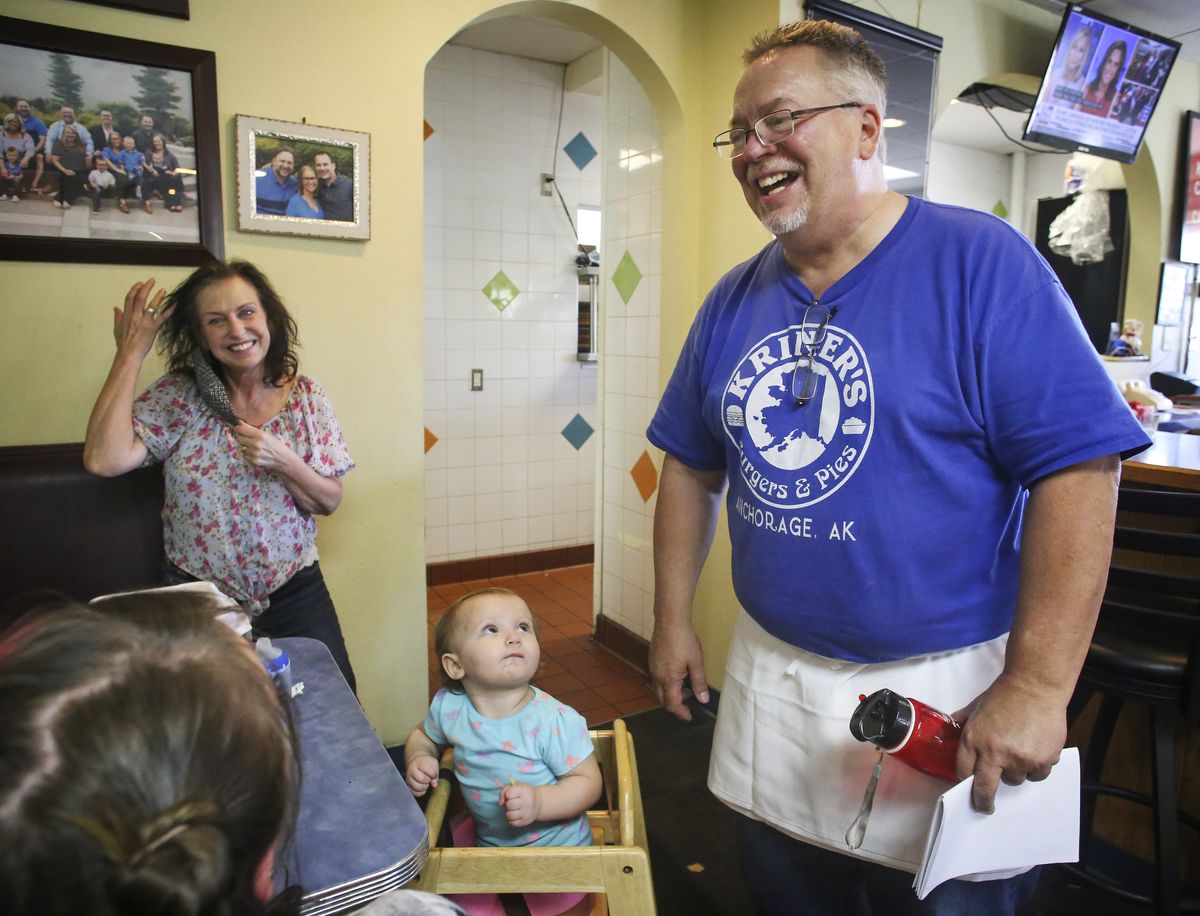 Andy Kriner, right, talks with patrons who celebrated a birthday by having lunch at Kriner's Diner in Anchorage on Aug. 4, 2020. (Emily Mesner / ADN)

Andy Kriner, right, talks with patrons who celebrated a birthday by having lunch at Kriner's Diner in Anchorage on Aug. 4, 2020. (Emily Mesner / ADN)

The Municipality of Anchorage on Tuesday ordered an Anchorage restaurant to immediately stop serving customers indoors after it remained open in spite of a new emergency order closing all restaurants, bars and breweries for indoor service. In a statement, the mayor’s office also said businesses that do not comply with the order will face fines and will lose access to potential municipal aid.

The emergency order was issued last week to slow the spread of the coronavirus in Anchorage and went into effect Monday.

Andy Kriner, owner of Kriner’s Diner, said he felt like he “needed to take a stand.” He’s received an outpouring of support from the community, he said.

It was the busiest Monday and Tuesday Kriner has experienced in 10 years, he said.

“Every table filled up,” he said.

By about 11 a.m. Tuesday, workers from the city posted a stop-work order in a window of the diner. The order directs the diner to stop all work operations or face fines and potential imprisonment, citing municipal code, but does not specify how much those fines may be.

On Tuesday evening, Mayor Ethan Berkowitz’s office issued a statement saying that while most Anchorage businesses were complying with the order, those violating it will be disqualified from receiving relief or stimulus funds from the municipality. It also said that it will issue stop-work orders to businesses not complying and issue fines that accrue daily.

It may also issue citations or take other legal action, according to the statement.

“Flagrant violations of Emergency Orders needlessly increase the public health risk to employees and customers, and divert public resources from the more pressing needs of the community,” the mayor’s office said. “To protect the health of our residents we call on all businesses to work with us for the next four weeks as we batten down on further community spread of COVID-19.”

On Monday, Carolyn Hall, a spokeswoman for Berkowitz, had released a statement warning that the city would take steps to enforce the emergency order.

“There is overwhelming evidence that activities that take place in bars and restaurants lead to super-spreader events of the disease,“ Hall said.

Over the last few weeks, cases of the coronavirus in Anchorage hit new highs and new daily cases have often numbered in the 100s, with 158 on July 26, 110 on Saturday and 111 on Sunday. The state reported 40 new cases in Anchorage on Monday and Tuesday each.

“Unfortunately, in-person dining is a very risky activity,” Hall said. “While it is unfortunate that the burdens of the pandemic fall disproportionally onto some industries, namely those designed around gathering people together indoors, the Municipality is doing what it can to help these businesses, and is encouraging them to serve Anchorage safely with to-go, curbside, delivery service, and in the case of restaurants, outdoor seating.”

Still, in the wake of the recent emergency order, many Anchorage restaurant and bar owners and industry leaders have said that shutting down these businesses for a second time puts a substantial burden on them and warned that many restaurants and bars will not survive.

In an interview Friday, Kriner said, “I’m not happy the mayor made the decision he made. But it’s not just his fault — I can’t imagine the pressure he’s under from both sides.”

“But after a while, no matter whose fault it is you just feel like you’re getting beat down, beat down, you’re starting to get back up and you’re beat down again. And it’s exhausting,” Kriner said.

Well Anchorage, we just realized we don’t have enough food to feed the whole city due to the OVERWHELMING support of you...

On Tuesday afternoon, trucks and cars lined the parking lot of the business. Droves of customers filled the restaurant.

By mid-afternoon, the diner had run out of enough food to continue serving customers for the day, Kriner said.

In a post on the diner’s Facebook page, it gave notice that it would close hours early and resume service Wednesday morning because it needed more food.

As Kriner spoke with a Daily News reporter Tuesday, a customer approached him and handed him a $100 bill.

“People are just handing me 100 dollar bills so I can pay the fines,” Kriner said.

At one point, another customer spent about $700 buying the meals of everyone in the diner.

“I started crying because it was amazing,” Kriner said. “I’ve never seen anything like this,” he said of the donations and support.

Kriner said he intends to keep the restaurant open as long as he has the money to pay the city’s fines.

The business doesn’t have an outdoor seating area and there’s no place to create one, he said.

“I have nowhere to put tables unless I put them around my dumpster,” he said.

When asked at a community briefing Tuesday if he supports Anchorage’s emergency order and the city’s steps to enforce it, Gov. Mike Dunleavy said that it’s important to have conversations about the virus at the local level.

When Alaska opened back up after the spring shutdown, “we all kind of went back and got a little comfortable,” he said.

“And some of us are rubbing elbows a little too close with folks,” Dunleavy said. “But with that said, I think the best, the best way to deal with this is having conversations with individuals, with entities, with businesses.”

The governor’s office has said that it should be up to local communities to decide how best to mitigate the spread of COVID-19 in their areas.