The pandemic means hundreds of conferences and other Alaska events are canceled. For the industry that relies on them, it’s ‘disastrous.’ 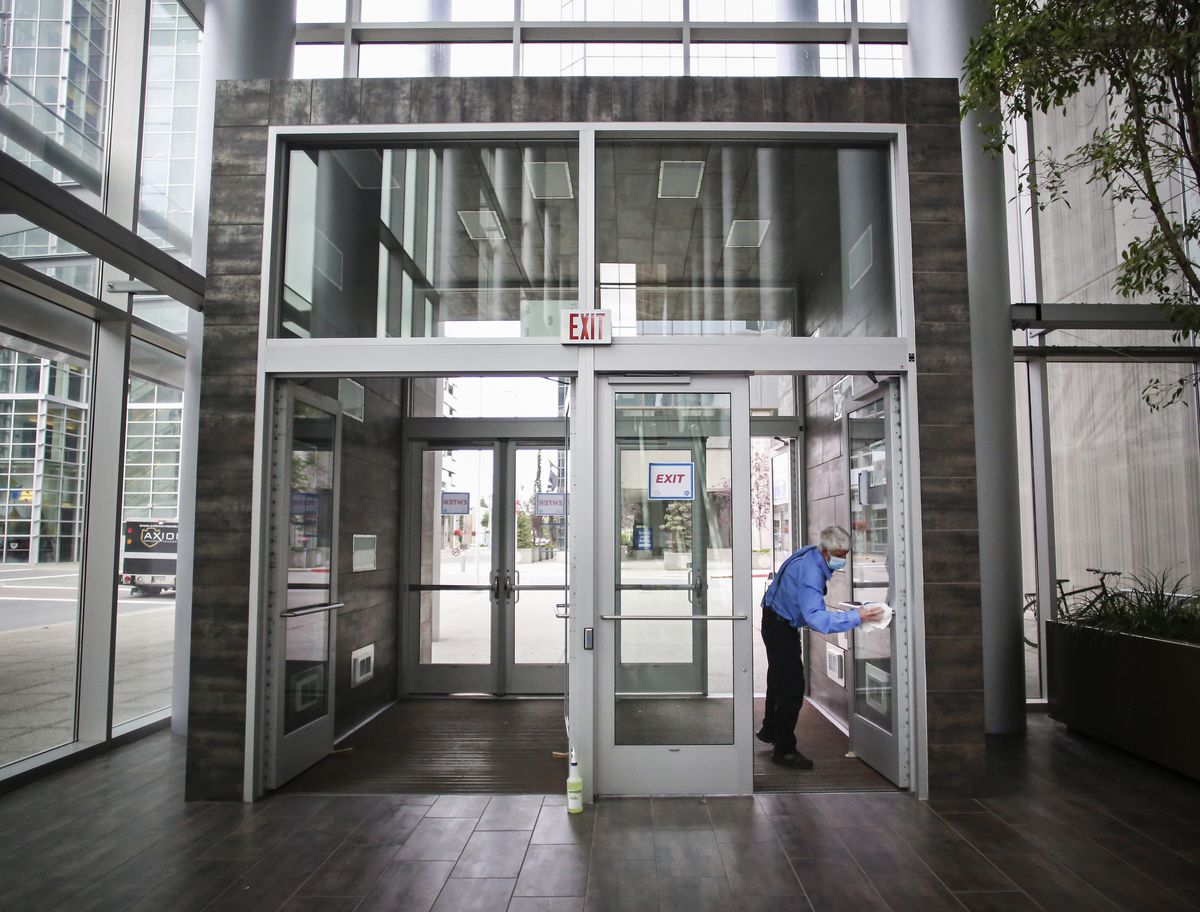 Wayne Young, janitorial supervisor at the Dena'ina Civic and Convention Center, cleans hot spots that are frequently touched throughout the building before his shift ends in Anchorage on July 31, 2020. (Emily Mesner / ADN)

Wayne Young, janitorial supervisor at the Dena'ina Civic and Convention Center, cleans hot spots that are frequently touched throughout the building before his shift ends in Anchorage on July 31, 2020. (Emily Mesner / ADN)

The coronavirus pandemic has brought conferences, trade shows and other big gatherings to an abrupt halt across Alaska, creating a near-blackout for the events industry and pushing some businesses precariously close to closure.

“It’s a horrible situation right now for a lot of people,” said Julie Saupe, president of Visit Anchorage, the visitor’s bureau for the municipality. “People went into the season with such high optimism after such a good year on so many counts.”

Hundreds of events in Anchorage have been canceled or have not even been scheduled this year, people in the industry say, as organizations balk at putting conference-goers at risk and government mandates limit the size of gatherings.

The cancellations include large conferences planned years in advance, as well as smaller meetings that are often booked by local groups at the last minute. They hurt an ecosystem of businesses that see revenue surge when visitors flood nearby city streets.

On Wednesday, the Alaska Federation of Natives announced it will hold its annual convention online for the first time. This means thousands of delegates from Alaska villages won’t fill Anchorage hotels and stores this October, an estimated $3.6 million hit to the local economy, according to Kathy Dunn, also with Visit Anchorage.

Businesses in the event industry have been hit especially hard by restrictions meant to reduce social interaction, said Darl Schaaff, co-owner of Art Services North, an events planner in Anchorage for more than 35 years.

“It basically puts us out of business as we exist,” he said. “If the reason you exist is to bring people together, and the law says you can’t come together, things get pretty hard.”

Since March, local, national and international organizations have canceled about 225 events in Anchorage at venues such as the Dena’ina and Egan convention centers, sports arenas, the BP Energy Center and hotel meeting rooms, said Dunn.

The cancellations yanked $72 million in expected income from the Anchorage economy, she said.

Only about 15 of those events have rebooked meetings starting next year, but more should follow, Dunn said.

Big event cancellations in Anchorage include:

• A National Congress of American Indians midyear conference at the Dena’ina and Egan centers in June, eliminating a $2.3 million impact from 1,400 participants.

• The Botanical Society of America in June, removing a $2 million impact and 1,200 visitors.

“We implemented an austerity program for utilities,” he said. “Everything we can shut off, we have.”

[Wave of evictions expected as moratoriums end in many states]

Spears said one group hosted a luncheon in June in the Dena’ina center, when the indoor limit was 250 people. Individuals sat alone at eight-foot tables. Servers laid out food in advance to eliminate personal interaction.

But the centers are financially healthy thanks to recent years of budget surpluses, Spears said.

Demand was high before the pandemic arrived, alongside the bed-tax revenues and convention sales that fund the centers, he said.

Still, the sudden drop in business prompted the Anchorage Assembly to recently shift $1.5 million from a long-term account for the centers to a short-term account, to cover an expected deficit this year.

“It looks like the road back to normal will be a very gradual process,” Spears said.

But it will happen, he said.

“We’ll get back to meetings in person, and with all the sanitation programs we have implemented, when the public is ready to come back, we’ll serve them properly,” he said.

The Sheraton Anchorage Hotel and Spa in downtown Anchorage has had a “very tough year” amid the cancellations, said an emailed statement from Stan Kennedy of Remington Hotels, which manages the hotel.

The hotel has rebooked some of this year’s canceled events for next year.

“In the short term, there will be significant hits to our industry, but we will recover,” the statement said.

Some businesses worry they won’t.

The events planner usually hosts the big Fourth of July festival on the Delaney Park Strip. But since March, that and every other event the business counts on has canceled, she said.

It looks like Art Services will not have work until Christmas when it decorates the Hotel Captain Cook, a job that doesn’t require interaction with guests, Corkery said.

“These are scary times,” she said. “We don’t want to close down. We’ve been in business too long.”

The company is looking to possibly host virtual events to bring in money, such as the fundraisers it holds for businesses and nonprofits, said Art Services co-owner Schaaf.

Art Services had to lay off its five employees, he said. It plans to bring them back if the business can outlast the pandemic.

“Who can sit around a whole year with staff expenses, utilities and other costs?” he said.

The streets in Anchorage, bustling when convention centers roll through town, have been mostly empty, said Sheena Goughnour, owner of gelato shop Gelatte in the heart of downtown.

The shop is earning enough to cover expenses until business returns, hopefully next year, she said.

“It’s a lot of people not here who aren’t spending at local businesses,” she said.

The economic impact of event cancellations isn’t limited to Anchorage. Deb Hickok, president of Explore Fairbanks, said cancellations in Fairbanks have removed $12 million from the local economy. Hotels in particular are suffering, she said.

“I’ve never seen anything like this, and that includes the Great Recession,” she said.

In Anchorage, Michael Cross of Crossroads Productions said the lighting and sound management company has lost at least $300,000 worth of work as shows and events canceled over the last five months.