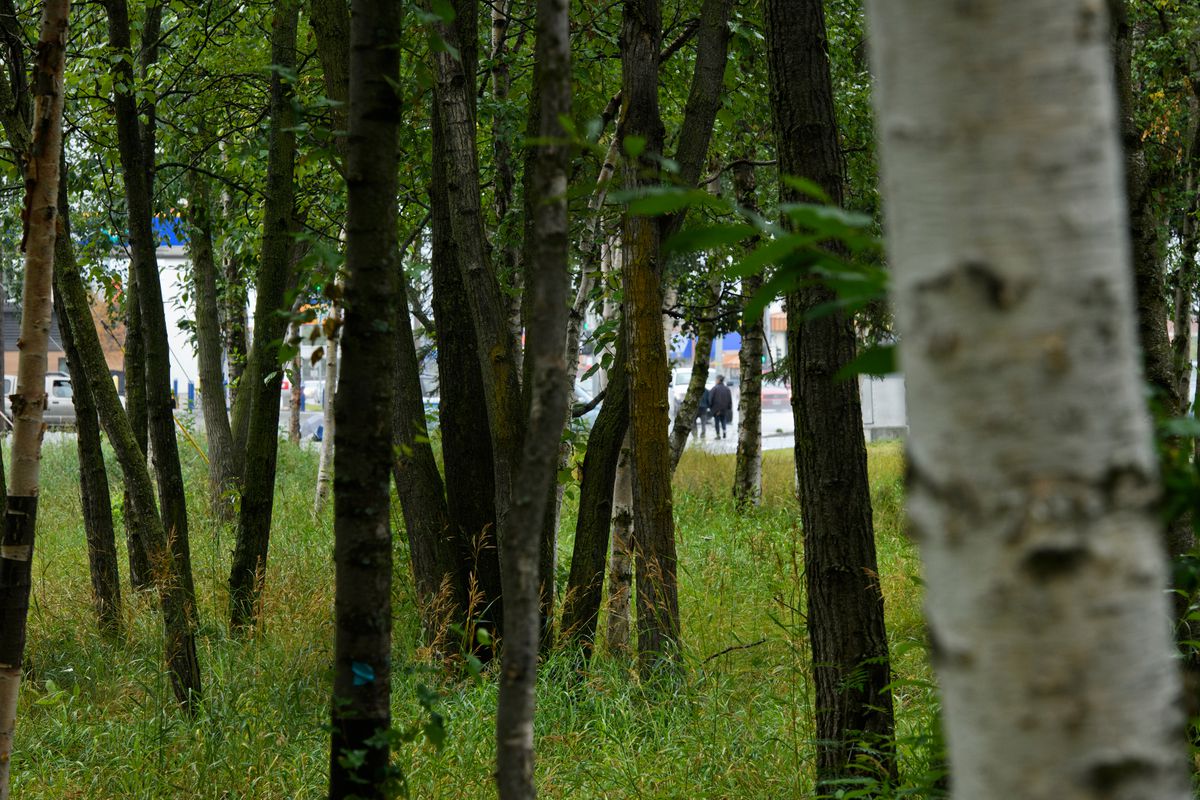 Joyce Fredericks, 64, was found dead in the woods along the New Seward Highway near Northern Lights Boulevard on June 26, 2020. Photographed on August 24, 2020. (Marc Lester / ADN)

Joyce Fredericks, 64, was found dead in the woods along the New Seward Highway near Northern Lights Boulevard on June 26, 2020. Photographed on August 24, 2020. (Marc Lester / ADN)

Eleanor Roland was having a hard time breathing. It was Sept. 2 and the 59-year old was in a thin strip of woods in Midtown. The moon would be full that night. But Roland would not live to see it.

The forested nook across from the Northern Lights Fred Meyer store is a camping spot for Anchorage’s homeless. The trees provide some shelter from the elements and the traffic along Northern Lights and the Seward Highway. The adjoining sidewalk affords ready access to motorists at red lights and nearby food and beverage options.

Police got to the woods at 10:28 that morning and found Roland. Medics came next and started CPR, according to police. But Roland could not be revived. She died at the scene, the 2700 block of Ingra Street.

These same, urban woods are where Joyce Fredericks also took her final breath. Police found the 64-year-old on June 26 at 5:35 a.m.

At 8:22 a.m. on Aug. 30, police arrived at East 20th Avenue and the Seward Highway, after someone reported a man lying on the sidewalk, seemingly lifeless.

Police found none of the deaths suspicious.

Both Murphy and Roland were known by several staff at Bean’s Cafe, the soup kitchen on East Third Avenue that is now operating as a mass shelter at Sullivan Arena, said Lisa Sauder, executive director.

Staff members were saddened to hear about the deaths, said Sauder, whose organization holds an annual vigil on winter solstice to memorialize homeless residents who have died during the year.

Roland listed her address at Bean’s Cafe and had her portrait taken by photographer Clark James Mishler for a series he did on Anchorage’s homeless.

Both Roland and Murphy had previous addresses in Western Alaska villages, according to online databases.

At least 56 people have died outdoors in Anchorage since 2017, including at least 12 this year, according to information provided by Anchorage police and compiled by the Anchorage Daily News.

It’s hard to know how many were homeless at the time of their deaths. Neither the Alaska State Medical Examiner Office nor Health Analytics & Vital Records staff -- the authorities who perform autopsies and issue death certificates -- track homeless mortality. They are not required to do so.

As Anchorage struggles to address its highly visible homeless crisis, some social service providers say Anchorage should track the deaths and convene a homeless mortality review panel. The goal would be to identify trends from the data that could inform policy actions and prevent future deaths. More than 20 communities across the United States record and examine homeless deaths, according to the National Coalition for the Homeless.

“There should be some kind of review mechanism within the homeless response system," said Meg Zaletel, an Anchorage Assemblywoman for District 4, which covers Midtown. “We should know so we can hold ourselves accountable.”

Zaletel is developing shelter-licensing requirements that could make operators inform the city whenever a client dies on their property. When it goes before the Assembly, the proposed ordinance could spark public discussion and scrutiny of homeless deaths, she said.

Anchorage “needs to see these numbers to determine how big the problem is” and extrapolate how many such deaths have happened over the last decade, said Chris Constant, the Anchorage Assembly member for District 1. His district includes downtown and Fairview where many homeless services are clustered.

It’s unclear why homeless deaths are not tracked in Anchorage especially since many of the services provided to unsheltered individuals are funded by government.

People don’t like to face the “hard truth” about fellow citizens dying in the streets, said Constant, who co-chairs the Assembly’s homelessness committee with Zaletel.

“I have publicly testified that this city collectively ignores these deaths and we do so for a number of reasons both conscious and unconscious,” he said.

One the major reasons is that many members of public simply want the problem to go away, Constant said.