With a temporary memorial for Alaska lives lost to addiction, organizer hopes to foster human connections 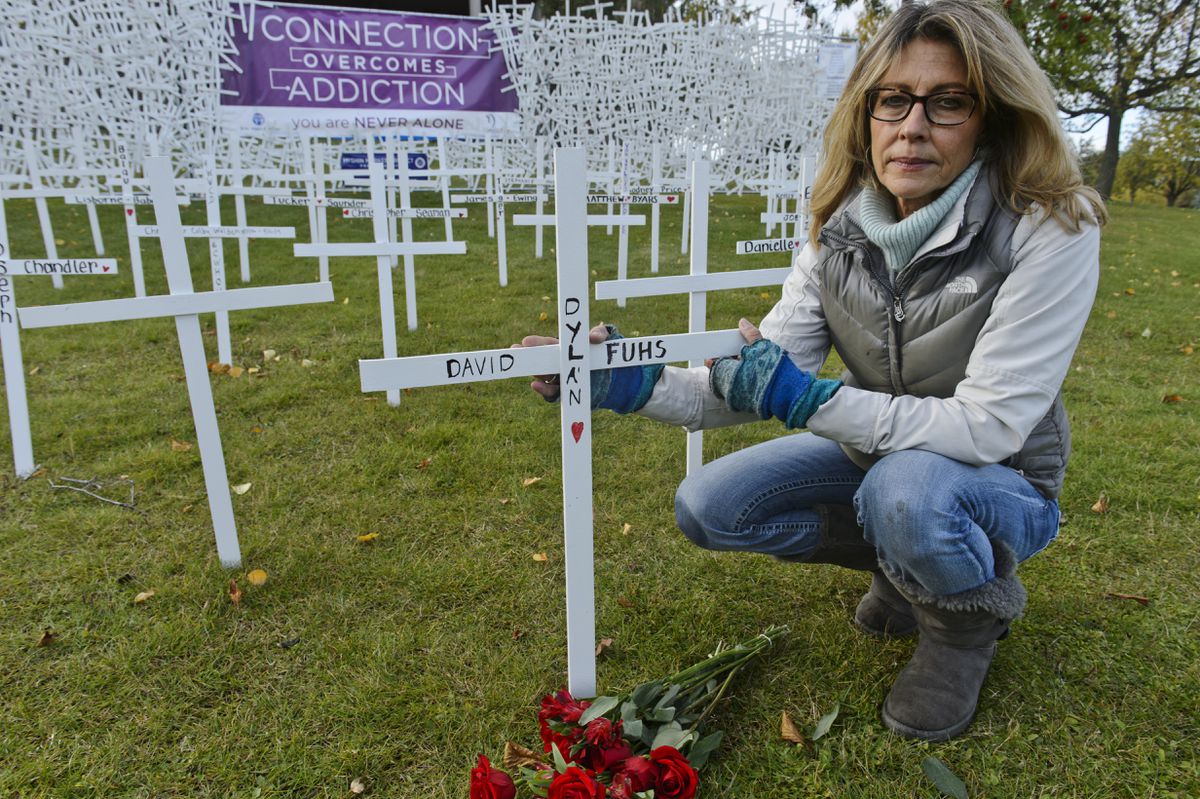 Karen Malcolm-Smith kneels by the cross memorial at the Connection Overcomes Addiction event on the Loussac Library lawn on September 18, 2020. The name of Malcolm-Smith's son, Dylan Fuhs, is written on the cross.(Marc Lester / ADN)

Karen Malcolm-Smith kneels by the cross memorial at the Connection Overcomes Addiction event on the Loussac Library lawn on September 18, 2020. The name of Malcolm-Smith's son, Dylan Fuhs, is written on the cross.(Marc Lester / ADN)

Hundreds of white crosses cover a section of chain-link fencing on the lawn of the Loussac Library this weekend. Dozens more, many with handwritten names, are tapped into the ground nearby. An Anchorage woman says the stark display is a way to remember people who died from addiction and the families they left behind.

“This is about honoring our loved ones, and connecting people who have lost loved ones to step out of the shadow of shame,” said organizer Karen Malcolm-Smith.

The display is both a memorial and a street-level outreach effort. Connection Overcomes Addiction also includes a station where visitors can write a name on a cross and add it to the memorial. At a nearby tent, volunteers provide advice to addicted people and their families about where to turn next.

Malcom-Smith said she wants to provide some of things she wishes she had during her own darkest moments.

“I have such empathy for people that are suffering,” she said. “I watched my son go through it.”

Dylan Fuhs, Malcom-Smith’s son, died from a heroin overdose in 2017, she said. His years-long struggle started when he tried to stop using prescribed pain medicine at age 14. She remembers him turning away from school and sports.

“Instead of asking what happened to you we were asking what’s wrong with you,” she said.

After her son died, Malcolm-Smith said she felt “frozen” in her grief for a year. Now, she says helping others is therapeutic. In the first few hours she spent on the library lawn Friday, she said four people had come to talk to her, each seeking help finding their own recovery.

That sort of human connection is particularly important during the pandemic, she said. Loneliness and isolation is affecting a lot of people now and can exacerbate addiction.

“I see it every day in the looks on people’s faces …” she said. “You turn inward and your brain can take you to crazy places.”

Cynthia Wolf visited early Friday afternoon. Eight weeks ago, Wolf lost her own son to heroin and fentanyl, she said. She said Malcom-Smith helped her find support in connecting with other parents who have been through similar experiences..

“My hope is that we can do this every year, that we can bring more awareness, bring more parents together and just open our hearts to fighting this,” Wolf said.

Malcolm-Smith said the toughest moment of the day came at its start. That’s when she wrote her own son’s name on a small painted cross. She hopes motorists passing the library will see the memorial and consider the people it honors separately from the disease that led to their death.

“I want them to know they are human beings, that they’re people,” Malcom-Smith said. “They were children once.”