The Alaska Division of Elections hired more than 900 people to facilitate voting in Anchorage this year. Meet one of them. 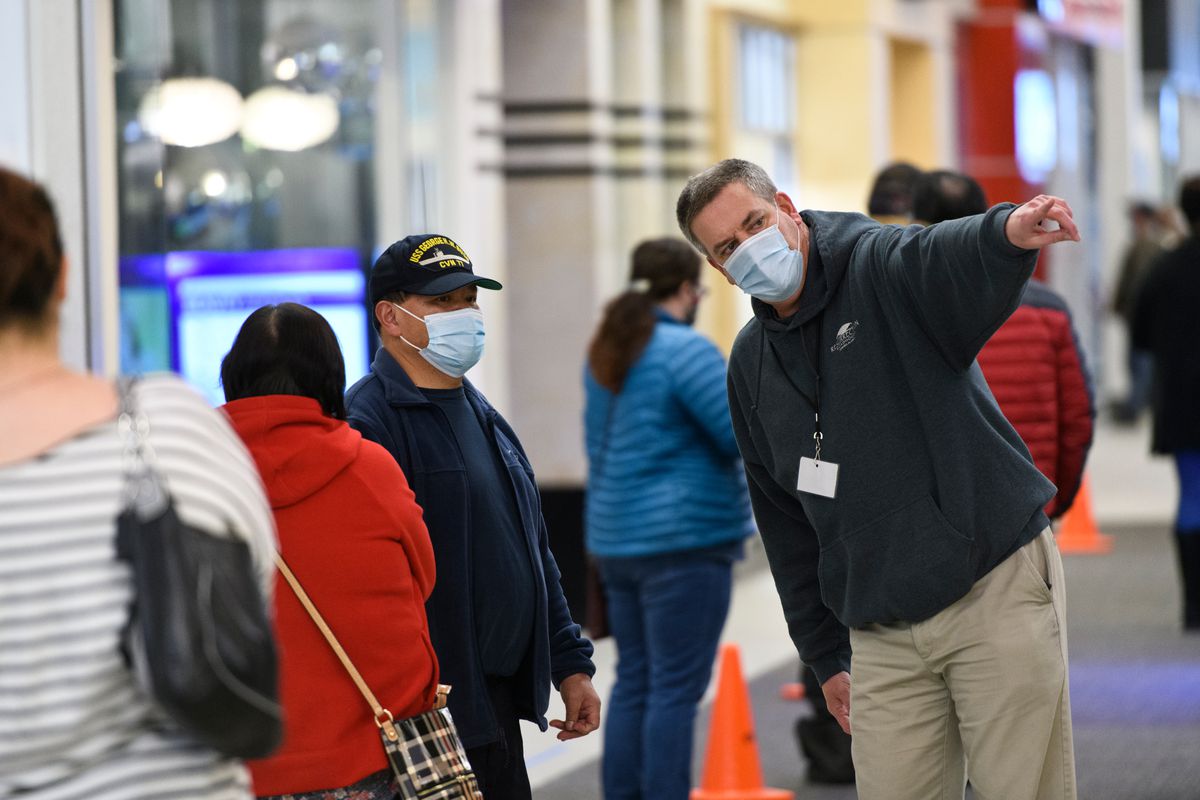 A hundred people lined up to vote by the time Bart Parker started his shift for the Division of Elections in the Midtown Mall on Tuesday.

Voters, mostly masked and spaced apart, stood in a line that stretched east from the entry of the polling place, doubled back on the other side of the mall, then dog-legged to the north. Some had trouble finding where the serpentine queue began.

Parker looked back and forth and estimated it was 45 minutes long. Closing time was a half-hour away, though, so Parker walked the corridor to ease worry.

Parker is just one foot soldier in a battalion of temporary workers hired by Alaska’s Division of Elections to facilitate voting this year. At the Midtown Mall, he’s often the first election worker voters encounter. He energetically walks the mall to answer questions, explain the rules, field complaints, look for violations and keep the mood light.

He’s been busy. Demand for early voting has soared this year, driven both by the coronavirus pandemic and intense interest in the presidential contest. The Midtown Mall location has averaged about 1,100 people per day since it opened on Oct. 19. By Friday, 37,995 people had voted early in person in Alaska, according to the Division of Elections.

By his ninth day on the job, Parker has learned what to expect to help keep things flowing smoothly in the space between Carrs and REI.

“We’ve all gotten better at our jobs,” he said.

Alaska’s Division of Elections hired 940 workers for the Anchorage area alone in this year’s general election, according to region supervisor Julie Husmann. On Election Day next Tuesday, that will include six to eight workers at each of its 119 Anchorage precincts, and other field workers, runners and supply helpers. It also includes an Absentee Review Board, a Question Review Board and workers to staff the early and absentee voting locations.

Parker, who also has a day job as safety and security specialist at Mears Middle School, will serve as precinct chair at Kasuun Elementary School that day. Until then, Parker works evenings and weekends at the Midtown Mall. He’s paid $15.50 an hour for his election work. The extra money is nice, he said, but he isn’t in it for the payday and would remain involved even if the work was volunteer.

This year, the work also means facing at least some increased risk of coronavirus exposure. Case counts have swelled to new highs in Anchorage this month, leading city officials to urge residents to step up precautionary measures to limit community virus spread. Election workers interface with people all day long. Many work from behind plexiglass barriers. Face shields, gloves, hand sanitizer and cleaning supplies are also provided. Workers are required to wear a mask.

Parker wasn’t ambivalent about signing up.

“Democracy still has to carry on,” he said outside the entrance to the brightly lit early voting room as people filed in and out.

He’s hardly alone in his willingness. Regional officials say the public’s interest in becoming an election worker has swelled like never before. Husmann said in a normal year, staff would need to cold-call people who checked a box on their voter registration that they were interested in helping. Earlier this year, she was concerned that the pandemic might complicate filling those jobs.

The opposite happened. Pat Oldenburg, a recruiter and trainer, said Tuesday that she has 450 people on a waiting list for election work assignments.

“I’ve never had this kind of outpouring of recruits before in any other election,” said Oldenburg, who has worked seasonally for the Division of Elections for 15 years. “But then 2020′s been a bizarre year all around.”

Oldenburg said some have told her they want to step in for an older population of regular workers. Husmann said some are simply looking for a way to help their community during the health crisis.

Parker, 53, said he takes precautions and feels healthy enough to do the job. He would miss being part of the team if he didn’t. He has worked at polling places on Election Day in Anchorage for more than a decade.

“Once you learn the rigmarole of all the stuff that’s involved, I find it enjoyable. It’s a great way to talk with people.” Parker said.

“It’s a civic opportunity. It’s not political,” he said.

As he walks the mall, Parker has answers at the tip of his tongue for the most common questions: Yes, the workers inside can tell you if and where you’re registered to vote. Yes, you can vote in person if you’ve received an absentee ballot, but you must destroy the absentee one. And no, you don’t have to cast a vote in every race and issue on the ballot for your vote to count.

When he’s not answering questions, he looks for people carrying completed mail-in ballots to give them the good news — they don’t need to wait in line. He also looks for people who might have physical limitations that make it hard for them to stand in the long line. He directs them to benches inside the voting center. They’ll still need to wait, but they can sit down.

He can’t satisfy every concern, though. Once in a while, voters make him the target of their grumpiness. Early Saturday, a woman demanded that he open the gate to the voting center ten minutes before its scheduled time, he said. He responded that the gate would open at 10 a.m.

“She said, ‘You’re not listening to me. My back hurts. Open the gates,’ ” Parker said.

“I said, ‘Yes, ma’am. Maybe you’re not listening to me. The Legislature and the Division of Elections has created a law about early voting. We can’t open until 10,’ ” he said. Another voter complimented him on his restrained response, he said.

Sometimes voters complain to him when others in line are not wearing masks. Though the mall posts signs at its entrances that say masks are required, and an Anchorage emergency order remains in effect that mandates the use of a mask in public common indoor areas, election workers can only encourage mask usage.

“We can’t force people to wear a mask to vote,” Parker said.

“The Division’s goal is to allow every voter to exercise their right to vote while balancing current public health concerns,” Husmann said. “It’s a fine balance.”

So far, Parker’s most prickly moments have arisen while ensuring that campaigning does not take place within 200 feet of the polling place entrance. Voters are often surprised to hear that the law includes the wearing of buttons, hats or T-shirts that display the name of a candidate on the ballot.

“I’ve had to ask people to take off hats, turn their shirts inside-out, cover their shirt, take off their sweatshirt,” he said. Most understand and comply, understanding that he doesn’t make the rules, isn’t trying to police their opinions and doesn’t betray his own personal political leanings.

“There was someone the other day. He was not very happy when he was asked to remove his Trump hat. And I said, ‘Well sir, it’s the law,’ ” Parker said.

“What are you going to do?” the man asked, according to Parker.

The man took the hat off, mumbling obscenities under his breath, Parker said.

Moments like that have been few. Far more often, voters are friendly to one another and express gratitude for the work the election team does.

“I’ve noticed more thank-yous this time than in the past,” he said.

That was true even when Parker was called on to deliver bad news at day’s end. At 5 p.m., Parker got in line himself. All those lined up ahead of him could vote that day, but everyone who arrived behind him was turned away.

“It is now 5 o’clock. The polls are closed,” he announced.

He disappointed his first potential voter at 5:04 p.m., then again at 5:05 and 5:06. In all, he turned away about 25 voters who arrived after closing time, but told each when to come back and let them know when the lines are typically shortest.

“You are at the right place at the wrong time,” he said, again and again. “Thank you for your understanding.”

At 5:48, when the last voter had departed, Parker pulled the metal gate down at the entryway. But his work wasn’t done. He then joined others to sort ballots at a table in the back, the final flurry at the end of a long day before the locked ballot boxes were transported to the Division of Elections office.

Most workers planned to be back again at 7:30 the next morning to do it all again. A line will likely already be forming by then, he said.

Early voting continues at the Midtown Mall in Anchorage on Saturday from 10 a.m. to 4 p.m. and Sunday from noon to 4 p.m. Find all locations statewide at the Alaska Division of Elections website.