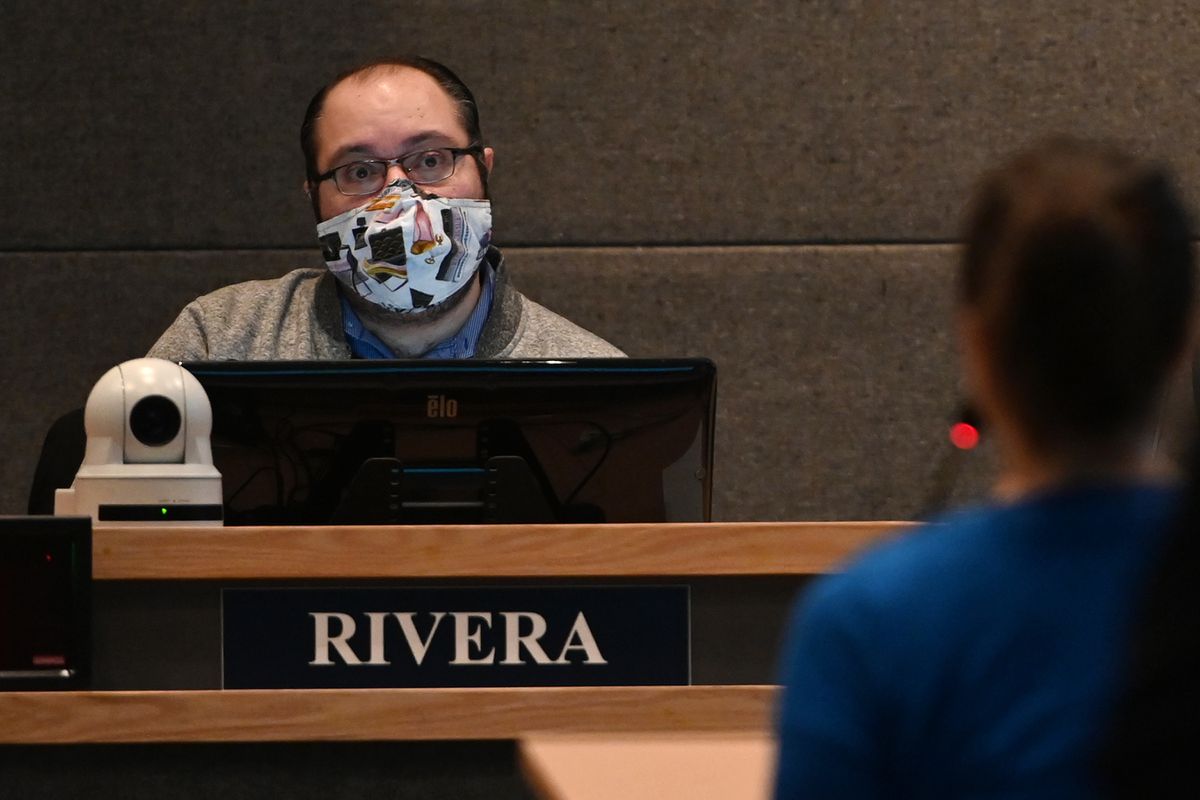 The Anchorage Assembly on Monday voted 7-3 to extend the municipality’s COVID-19 emergency declaration period to Jan. 15.

The vote came after 28 people testified, mostly against the extension, for about two hours.

The extension marks the sixth emergency period approved by the Assembly. The declaration first went into effect March 12 as COVID-19 emerged in Alaska. The virus is now moving through the community at its most prolific rate. Despite the increased spread, the declaration remains controversial to some in the community.

The declaration gives the mayor power to take actions like shutting businesses or mandating masks. It also allows the city to reallocate money to more nimbly address issues related to the virus.

“I think if God intended for us to wear masks, we would have been born with them,” he said.

The man and another woman were later removed from the chambers for refusing to wear a mask.

Mat-Su resident and Anchorage Assembly watchdog Eugene Haberman also testified, and as he often does, criticized Assembly members regarding the process. But he also chastised many in the audience for either not wearing masks or speaking out against wearing masks.

Haberman said it’s everyone’s responsibility to wear masks to deal with the pandemic, rather than protest the mandate.

Christine Hill, who narrowly lost a challenge to Rivera in April, argued the real tragedy of the pandemic is the mandates. Hill argued, without providing data, that the mandates have caused more people to commit suicide.

“There have been suicides — there have been real deaths in connection with COVID, but it’s not because they caught actually the virus, but rather the effects of what they are doing,” Hill said.

Assemblyman Forrest Dunbar said while he appreciates the public’s opinion, the virus surge in Anchorage has gotten exponentially worse since the last extension of the emergency declaration.

“Our decision should be based on the performance with the virus, frankly, rather than some kind of political decision or our own arbitrary timeline,” he said.

Andrea Caballero, an infectious disease doctor who works at Providence and Alaska Regional hospitals, said based on the current trajectory, the virus will not be gone by Jan. 15 and another extension will be needed.

[“We are on the edge”: A Q&A with an infectious diseases doctor about Alaska and COVID-19]

While several residents pointed out that the Alaska Airlines Center could be stood up as an emergency hospital, Caballero said there aren’t enough medical professionals to staff it.

After more than an hour of deliberation, the Assembly passed the resolution to extend the emergency declaration, with members Jamie Allard, Crystal Kennedy and John Weddleton voting against. Weddleton clarified that he supported the extension, but wanted to postpone action by one day so Kennedy could introduce amendments.

Prior to the vote, Rivera said that while the testimony in the chambers skewed toward the opposition, it didn’t reflect the calls, emails and texts he has received from people supporting an extension of the declaration.

Some testifiers threatened to vote Rivera and other members out of office, and earlier this month a petition to recall him from office was approved for signature-gathering.

Rivera said businesses and residents support the city’s response to the pandemic.

“It is clear to me what my constituents think about this emergency declaration,” he said.