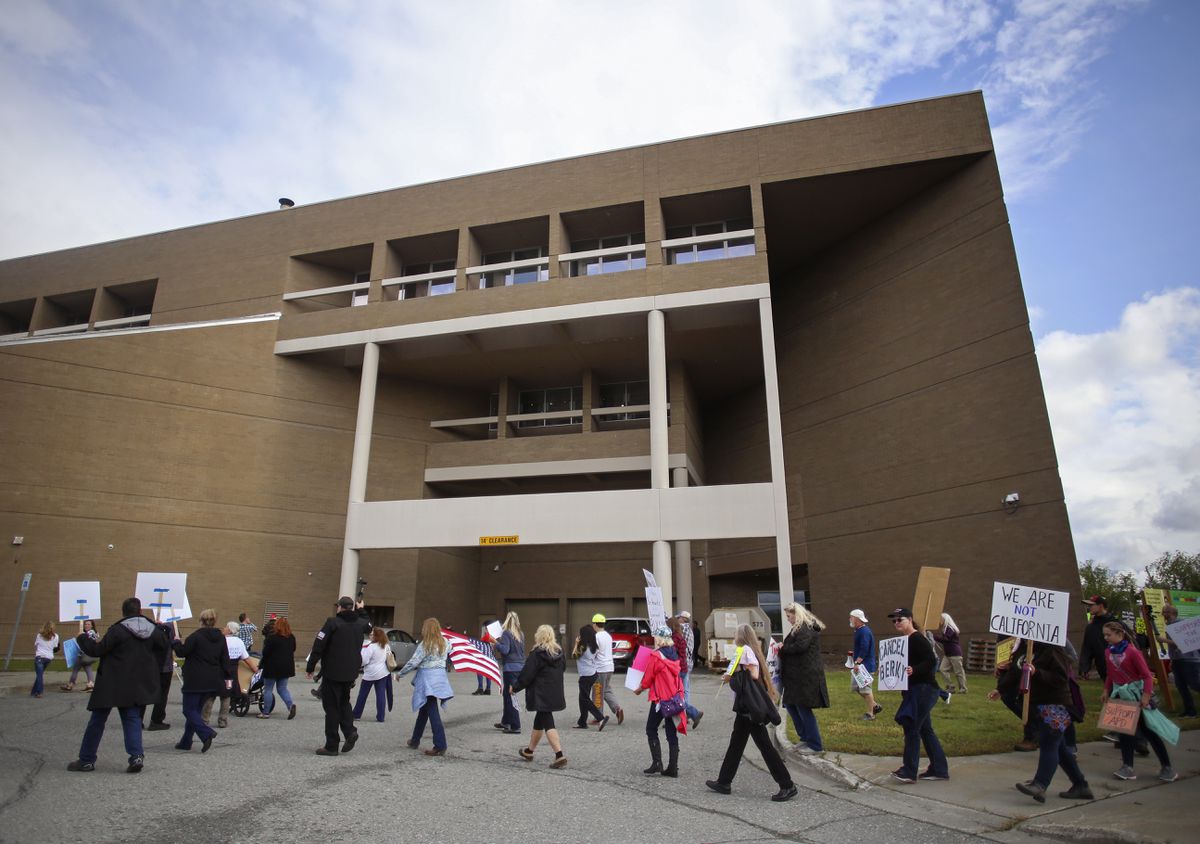 Protesters walk around the Z. J. Loussac Public Library looking for an entrance into the building where the Anchorage Assembly gathered for a meeting on Aug. 11, 2020. (Emily Mesner / ADN)

Protesters walk around the Z. J. Loussac Public Library looking for an entrance into the building where the Anchorage Assembly gathered for a meeting on Aug. 11, 2020. (Emily Mesner / ADN)

In a Zoom court hearing Friday morning, lawyers for a group called Alaskans For Open Meetings argued that the court should pause the effect of legislation passed by the Anchorage Assembly in August while the meeting chambers were closed to the public due to COVID-19.

Such a ruling would take immediate action while the case proceeds. Superior Court Judge Una Gandbhir said Friday she would take the matter under advisement and issue a written ruling as soon as possible, but did not intend to give a verbal ruling from the bench.

In August, under an emergency order limiting gatherings, the number of in-person participants at Assembly meetings was capped at 15 people — effectively meaning only Assembly members, staff and the media were allowed inside. The Assembly still conducted meetings, which were livestreamed and broadcast on TV. It also took testimony over the phone or email, rather than in-person.

City attorneys contend telephonic participation is not a violation of open meetings law. However, a group of residents believe it is, and request all legislation passed during this monthlong period be ruled invalid.

The group, Alaskans for Open Meetings, sued the city and Assembly Chair Felix Rivera. They hired attorneys Mario Bird and Michael Corey after a crowdfunding effort to back the legal fight.

Some of what was passed during the shutdown, such as use of CARES Act funds and a ban on so-called conversion therapy on minors, was controversial and received far more testimony than normal.

Ruth Botstein, an attorney for the city, argued on Friday that at one point more than 1,000 people were streaming the meeting, and more were watching on TV. It was far more than the number of people that could fit in the Assembly chambers regardless of an emergency order, she said.

Corey on Friday argued the city clearly broke the law, and is now trying to explain why certain circumstances made that appropriate. He said had the entire Assembly met via a video platform like Zoom, the group would not have an issue with telephonic testimony. But if the Assembly members are meeting in-person, the public should get to testify in-person, as well, he argued.

Botstein argued that Alaskans for Open Meetings is cherry-picking a few controversial pieces of legislation passed during the shutdown and wrongly using Open Meetings Act violation allegations to undo policy they disagree with.

She said she doesn’t know what a judicial order staying the effect of the policy passed during the time would mean, and implementing it would be difficult.

Future hearings in the case have not yet been scheduled.