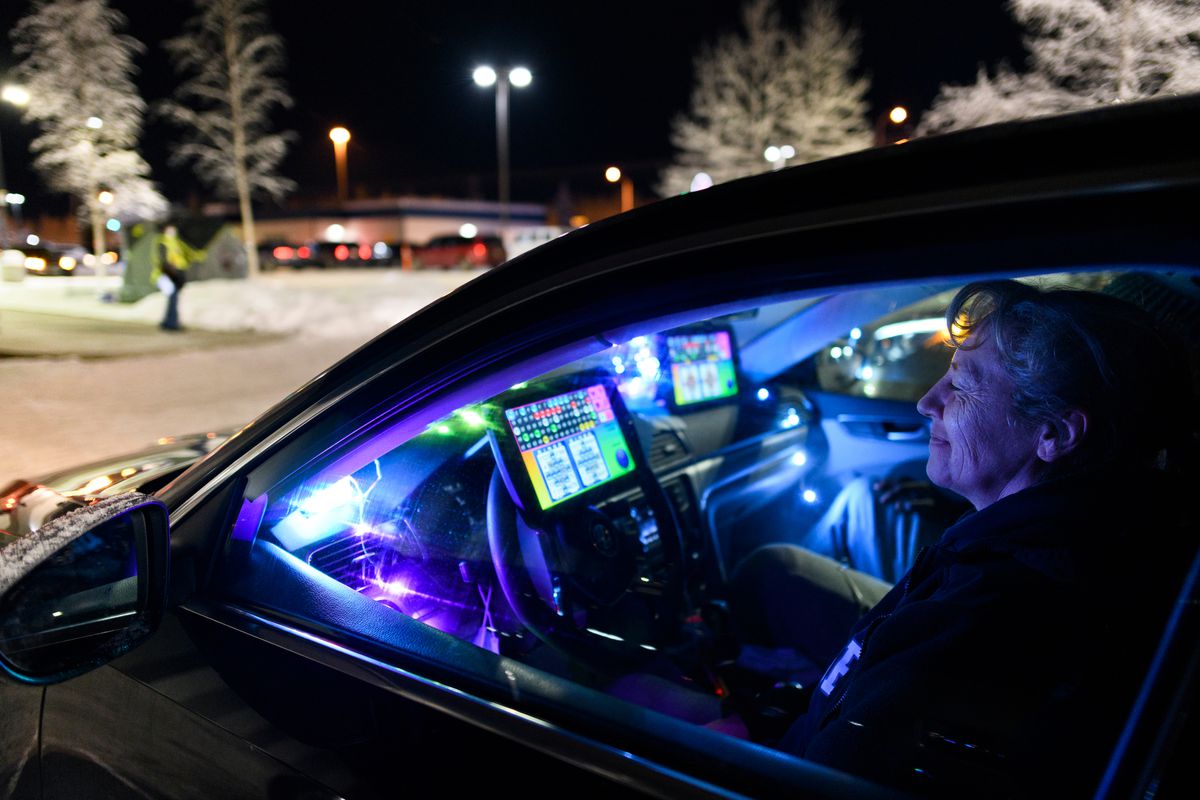 When Tudor Bingo Center manager Denece Vesco walked up to the minivan parked outside the business Wednesday afternoon, the corners of her eyes crinkled, showing the smile hidden beneath her multicolored gaiter.

Lele Puletapuai’s rolled down the driver’s side window, greeting Vesco with a wide smile before joking that something must be wrong with the day’s bingo game, because she hadn’t won yet.

“My sister keeps winning! It’s not fair,” she said loudly before laughing.

From the passenger seat, her younger sister, Sarai Tafao, proudly said that she’s just lucky. The two women often chat with Vesco and other employees at the bingo center.

Before the pandemic, Puletapaui’s routinely stopped at bingo halls throughout Anchorage, sticking with one for a while when she felt that luck was on her side.

Now she exclusively plays at Tudor Bingo Center, the only hall in Anchorage that has adapted enough to keep the games going through the city’s “hunker-down” periods, when the halls, along with restaurants and bars, are mandated to suspend in-person services.

John Powers, the owner of Tudor Bingo, said business has slowed 60% to 70% since the pandemic began. The bingo hall, he said, is in “survival mode.”

“We’re just just paying the bills,” Powers said. “I’m honestly doing this just to keep the crew working. I’m not making much in the way of money.”

All of the other bingo halls have halted games because of the most recent emergency order. Gold Cache Bingo in Midtown and Player’s Choice Bingo in Mountain View are still selling pull tabs out of their halls.

Powers and manager Vesco said they came up with the idea of curbside bingo before the August shutdown — they wanted to find a way to adapt, as restaurants were doing with takeout or delivery, but modify the idea to fit their business. Most importantly, if the business could stay open, their employees could still make money.

At Tudor Bingo Center, the 50 employees know the names of nearly every customer. Vesco describes the employees as a family and said the same extends to customers.

On Tuesday night, the employees tossed snowballs at one another during intermission. They cracked jokes and caught up with customers about their families and how they’ve been doing during the pandemic. The hall has a lot of regular customers and it was hard not seeing the familiar faces when the business had to temporarily shut down, Vesco said.

Powers said he poured thousands of dollars into a safer air filtration system and stocked up with hundreds of gallons of cleaning fluids as soon as he could when the pandemic began.

When the group realized more shutdowns were forthcoming, he invested in a digital gaming system — small electronic devices for bingo players to use inside their cars and equipment to broadcast the numbers over the radio on a dead station.

Puletaupaui’s said she feels safer in the driver’s seat of her minivan. She’s not at risk of being exposed to COVID-19 and she still gets to play the game she loves. She’s started bringing her sister to the curbside sessions and they enjoy spending time together, even though Puletaupai’s jokes that her sister drives her crazy.

The sisters have yet to miss a single day at bingo.

For Bernard Carlson, playing from the car takes away some of the monotony that the pandemic has delivered. Carlson flew to Anchorage from his home in Kodiak, and he’ll stay here for a little more than two months while he receives cancer treatments.

He regularly attends the curbside sessions with a friend.

“I come here to kill time before my cancer appointment and get it off my mind,” he said.

Vesco said she was relieved that customers enjoyed curbside bingo when they first began in August, but she worried how the employees would handle the cold and how customers would feel about the darkness during the December shutdown.

“We asked our employees what they wanted to do because, once again, we’re either gonna have to do curbside or lay everybody off,” she said. “And everybody wanted to do the curbside.”

For Powers, too, the hall represents family. He became involved in the bingo hall in 2006, when his brother’s health took a turn for the worse. Many of the employees have been at the hall for as long as he has.

Especially during the latest closure, it felt important to make sure that everyone would be OK during the holiday season, he said.

“Christmas is coming up, New Year’s,” he said. “These folks have kids and I’ve got several families on our health insurance plan and I definitely don’t want them to lose that.”

But by this point, Powers said, the business is struggling — some days the bingo hall gives out more than it takes in.

The game itself calls for an enormous financial commitment from the halls — each session hands out $5,000. Vesco said the hall still gives out the same purse, despite the dwindling attendance. When the other bingo halls are open, she said, it’s important they stay competitive.

A portion of the sales is promised by state law to nonprofits, regardless of whether Powers’ hall makes a profit. He said the drop in revenue this year will also mean a loss for the organizations they support.

Powers said the hall donates to 50 organizations and focuses on supporting groups that help the local community or rural Alaska.

“We have 50 permits and I haven’t gotten all of them into the rotation this year, so their proceeds are 60% down as well,” he said. “If we’re down, they’re down, and a lot of them depend primarily on us to raise money for them.”

Powers was upset that bingo halls were grouped together with bars and restaurants to face the tightest restrictions during the pandemic. Tudor Bingo Center is the largest bingo hall in the state, he said.

In the 20,000-square-foot hall, Powers said, there is enough room to social distance.

“We have done everything the city and state have asked us to do and then some,” he said.

Even without restrictions, the bingo hall would not be nearly as busy as normal, Powers said. Many customers are staying home because health conditions make them especially vulnerable to COVID-19. More players have actually shown up to curbside bingo than they do when the game has been offered inside the hall during the pandemic, Powers said.

Before the shutdown, the busiest pandemic nights could see 100 customers, he said. Before, Powers said, there would regularly be 250 people chatting at the tables. During special events, like when the hall gives away a larger-than-normal chunk of money or when the winner drives away in a new car, the hall could reach its capacity of around 530 people.

Powers said the hall used to burst with energy — the room would erupt in cheers and claps as soon as someone jumped up and yelled “Bingo!”

But instead, on a chilly Wednesday afternoon outside the hall, a player rolled down the window of her vehicle and yelled. An employee dressed in a bright yellow safety vest ran over to check the card as the sky began to darken for the day.

Although the fanfare was quieter, the customers were still coming back for the draw of competition and the comfort of a familiar face.

“Maybe tonight will be my lucky night,” Puletapuai’s said.