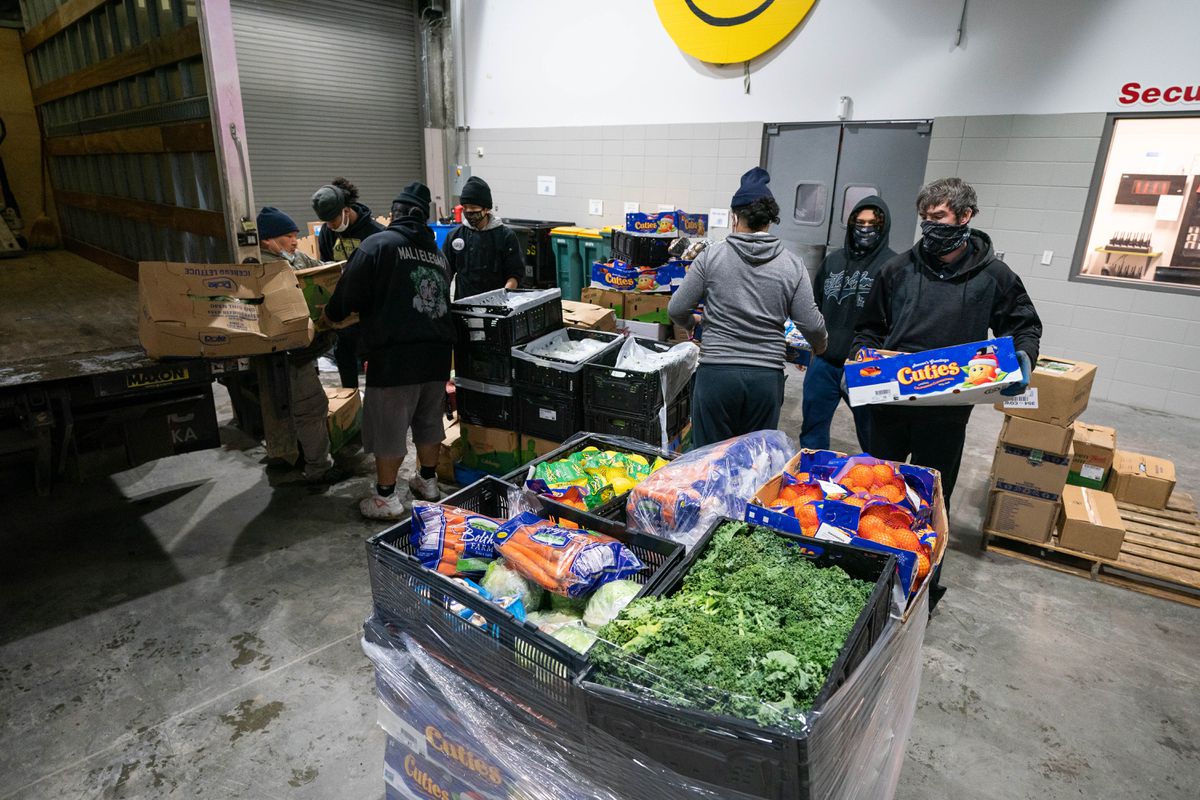 Bean's Cafe staff sort and load fresh produce salvaged from an overturned truck on Saturday, Dec. 26, 2020 at the Dena'ina Civic and Convention Center in Anchorage. The fresh produce will help sustain operations at the soup kitchen for several months, according to executive director Lisa Sauder. (Loren Holmes / ADN)

Bean's Cafe staff sort and load fresh produce salvaged from an overturned truck on Saturday, Dec. 26, 2020 at the Dena'ina Civic and Convention Center in Anchorage. The fresh produce will help sustain operations at the soup kitchen for several months, according to executive director Lisa Sauder. (Loren Holmes / ADN)

Groceries salvaged from an overturned truck are headed to an Anchorage soup kitchen at a time when need is high around the city.

The tens of thousands of pounds of fresh produce — strawberries, green beans, lettuce and more — will help Bean’s Cafe and the Children’s Lunchbox program serve meals to those in need across Anchorage, Bean’s Cafe executive director Lisa Sauder said Friday.

The donation comes at a time when many people are facing homelessness and food insecurity for the first time, in the midst of massive economic upheaval and high unemployment numbers brought on by the COVID-19 pandemic.

“I can’t tell you how many calls we’ve got and how many parents we’ve talked to that have never been in a position of not knowing how they’re going to feed their children,” Sauder said. “And it’s really heartbreaking.”

She’s heard from people who were previously volunteering for them and are now asking for help. So many people in the Anchorage community are hurting right now, she said.

Late afternoon Wednesday, Justin Creech, who owns Vulcan Towing, got a call that there’d been an accident at Mile 98 of the Glenn Highway, and he and his team headed out. They found a trailer full of meat and fruit that had overturned in a ditch and began recovering it overnight. They salvaged what they could but heard the food company wouldn’t resell any of the items.

That’s when Creech got in touch with Sauder from Bean’s Cafe and figured out a way to get the donated items to the soup kitchen.

At that point, Greg Spears, the general manager at the Dena’ina Civic and Convention Center, received a call Christmas Eve from Bean’s Cafe asking if they could help accommodate the thousands of pounds of food that would need a freezer. He said yes.

From there, they offloaded the pallets into the Dena’ina Center. Creech, his five children and a group of staff from Bean’s Cafe and the convention center all helped unload Thursday evening.

“It was such a great Christmas moment in this time where we’re all so separate,” Sauder said. “But yet we all can share a common goal of making sure that nobody in our community goes hungry or unsheltered. And people really rose to the occasion last night.”

Now comes the task of preserving much of the food so it lasts for several weeks, she said. That will involve turning some of the fresh strawberries into jam so they can use it throughout the winter.

“This is going to sustain us for several months,” Sauder said.

Rex Vanilau, who was helping pack up a truck to Bean’s Cafe on Saturday morning, said the donations mean a lot and that they can give more and more food to the clients.

“We never get anything this much,” Vanilau said. “This is a lot.”