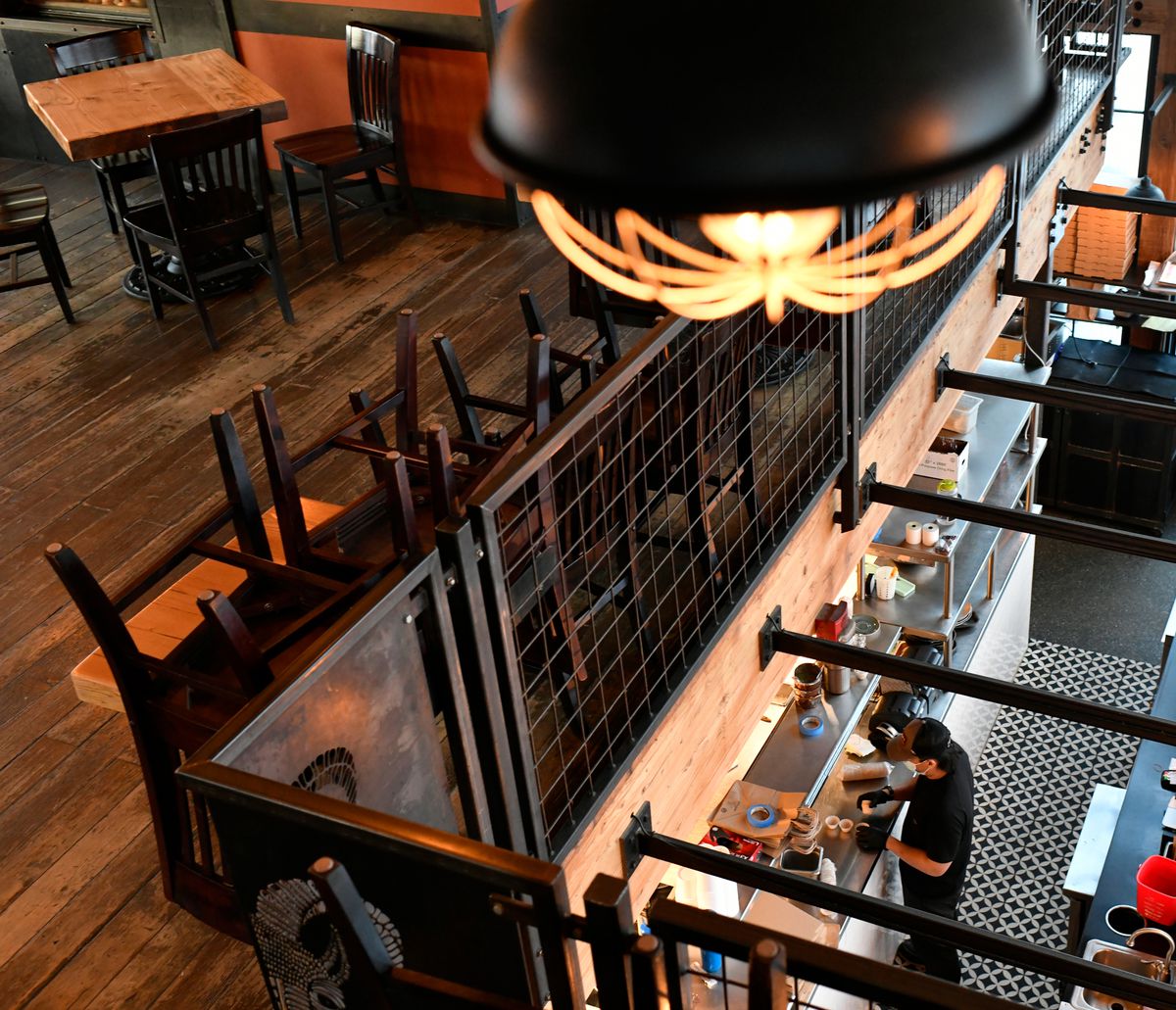 Anchorage on Friday will relax a broad economic closure that had been in place for the month of December, allowing some indoor service at bars and restaurants and loosening restrictions on other businesses, Acting Mayor Austin Quinn-Davidson said Tuesday.

Industries that had been closed to indoor service for December under the modified “hunker-down” order, including theaters, bingo halls, bars and restaurants, can begin serving customers inside under certain conditions. The new emergency order also includes some new stipulations for the hospitality industry and relaxes capacity restrictions at retail stores and gyms.

Quinn-Davidson, during a community briefing, attributed a recent decline in Anchorage’s COVID-19 cases to the December order and to “personal sacrifices” made by Alaskans.

“We’ve brought cases down. We freed up space at our hospitals, and now we find ourselves in a slightly better position,” she said. “The decisions we make in Anchorage have a ripple effect across the entire state.”

Health officials have said the order likely helped to reduce case numbers, although there are many other factors that could have contributed, as well.

“While we’re certainly not out of the woods yet, we are now in a position where we can begin to ease restrictions,” Quinn-Davidson said.

The acting mayor’s limited “hunker-down” order was met with outcry from some in the city, including a number of businesses in the hospitality industry. Some felt the restrictions were disproportionate and unfairly targeted the industry. Industry leaders warned that many businesses would close permanently without significant financial help.

Sarah Oates, president and CEO of the Alaska Cabaret, Hotel, Restaurant & Retailers Association, said in a written statement that she is happy that the December restrictions will be eased but added that the new emergency order is “not sustainable.”

“I hope that restrictions will be loosened relatively quickly and methodically; (the acting mayor) has heard that while the new EO is better than continued closures, this must be a short-term compromise, or businesses will continue to suffer insurmountable losses,” Oates said.

Indoor entertainment facilities, including theaters and bingo halls, were also closed under the December order. Retail stores and public businesses like gyms were limited to 25% of capacity.

[The pandemic relief bill will provide much-needed help for Alaska businesses. The money is expected to go quickly.]

The new Emergency Order 17 goes into effect at 8 a.m. Friday, Jan. 1, and will remain in place until it is revoked, according to the acting mayor’s announcement.

A separate mask mandate remains in effect in Anchorage, requiring people to wear a mask or cloth face covering while at indoor public spaces, or while they are outdoors if they’re unable to stay socially distant.

The coronavirus restrictions enacted under the order include:

• Bars, restaurants and breweries, which had been closed to indoor dining under the previous emergency order, will be allowed to reopen at 25% of their building occupancy capacity. However, EO-17 places new restrictions on when the businesses can serve alcohol, requiring them to stop serving at 11 p.m.

• Retail stores will be allowed to increase their capacity to 50%, along with gyms, fitness centers and group exercise classes.

• Personal care businesses like hair salons will be able to operate at 50% capacity, but they still can’t provide services that can’t be done without taking off a face mask, like beard trimmings and facials.

• As under the previous emergency order, organized sports can’t hold indoor competitions, but individual teams can practice indoors and hold scrimmages. Ice sports, such as hockey, can hold indoor practices as long as players can remain 10 feet apart. According to the emergency order, environmental conditions of ice rinks make them “more conducive” to spreading COVID-19, requiring tighter restrictions.

• Outdoor sports, including outdoor ice sports, are allowed to continue with various limitations, including that participants wear face masks if they can’t keep a 10-foot distance between them.

Quinn-Davidson said that the limitations on individual gatherings are being kept to help temper the possible effects of reopening some businesses.

“These restrictions reflect a balance,” Quinn-Davidson said. “By holding fast to stricter restrictions on individuals, we’re each making the choice to support our local businesses.”

She also said the city is restricting businesses to serving alcohol only until 11 p.m. as a way to limit the time patrons spend in bars. The longer a person is in one place, the more prone they are to catching or spreading COVID-19 there, she said.

“The situation we’re worried about in bars is if someone comes in at, you know, 8 p.m. and stays till 2 in the morning,” Quinn-Davidson said. “Meanwhile, the more you’re drinking, the more you might be likely to take your mask off or not follow other important protocols.”

Lee Ellis, president of the Brewers Guild of Alaska, said that he was relieved to see some of the restrictions on the hospitality industry will soon be eased.

[ COVID-19 cases in Anchorage and Alaska are on the decline. Is the ‘hunker down’ responsible?]

Ellis said that operating at 25% capacity, coupled with more federal economic relief money, will be enough for some businesses at risk of closing to continue surviving, but some businesses have fallen so far behind that they will not recover.

“We came dangerously close to overwhelming our health care system before the holidays,” Quinn-Davidson said Tuesday.

Since the beginning of the pandemic, 119 Anchorage residents who had COVID-19 have died.

The state recorded its highest-ever daily case count in early December, when the case tally surged to a record 933 with a third of those cases in Anchorage.

Those numbers have fallen over the last two weeks.

The acting mayor was joined at the community briefing by city health officials and public health experts.

Dr. Janet Johnston, the city’s epidemiologist, said that all of the city’s public health metrics have been improving. Over the last week, Anchorage has averaged 114 new cases per day, which is a 30% decrease from the week before, Johnston said. The 14-day average for new daily cases per 100,000 people in Anchorage is currently 45.6, the lowest rate since October, she said.

“We’re going in the right direction,” Johnston said. “And if we continue to wear masks, keep our distance, avoid crowds and keep our social circles small, we will be able to continue to reduce COVID spread while the vaccination starts to be deployed.”

Still, Johnston said that Anchorage remains in a “precarious situation” and is at a high risk level for COVID-19 transmission. Its daily case counts are three times higher than the Centers for Disease Control and Prevention’s highest risk level for reopening schools and twice the highest risk level set by the Harvard Global Health Institute, she said.

Dr. Tom Hennessy, an infectious disease epidemiologist with the University of Alaska Anchorage, said that the rate of transmission has fallen by 33% since early November.

“We’ve seen after each of these major emergency orders that led to gathering restrictions and restrictions on some businesses, we’ve seen a decrease in transmission,” Hennessy said.

Health experts also warned that with the easing of restrictions, an increase in coronavirus cases is likely to occur. After previous similar restrictions have been lifted in Anchorage, transmission rates increased, Hennessy said, and it’s unlikely that transmission will continue to decrease.

“If virus transmission increases to high levels like we saw in October, or July, our health care capacity will likely be threatened and further restrictions might be needed to control the epidemic,” Hennessy said.

‘Spend that $600 at local businesses as fast as you can’

Still, Ellis of the Brewers Guild said he didn’t think that the recent decline in cases should be directly attributed to the modified “hunker down” that shut down his industry.

“Correlation is not causation,” he said. Ellis said he worries that people see lower daily case numbers and easing restrictions and so do not act with as much caution, leading to increasing cases.

Ellis and other industry leaders have clamored to keep their businesses open, saying that there is little evidence that closing them significantly lowers the spread of the coronavirus. Industry leaders said that the majority of community spread is not occurring in mostly empty drinking and dining establishments, but is occurring during private gatherings in unregulated and unsupervised spaces where people do not wear masks.

Epidemiologist Johnston said bars are a business where transmission is most likely. The city and health experts discussed keeping them closed under the new order, she said.

“We decided that we didn’t want to do that because we know there are businesses and workers who are severely impacted by having that whole segment closed,” she said.

Kevin Berry, an economist with the University of Alaska Anchorage, said Tuesday that studies show people stop going out to businesses due to fear of COVID-19, even when they are not under lockdown orders. After a lockdown, they don’t necessarily go out to businesses again.

“When restrictions are lifted, people do not return to completely normal behavior. They continue to protect themselves and not go to businesses and not want to dine indoors,” he said.

Berry said many Anchorage residents, especially workers in the leisure and hospitality industries, lower-wage workers and front-line workers, are potentially facing a much longer economic recession than workers in higher-paying jobs.

Stimulus checks from the federal government will soon offer a little help, and Berry said Anchorage residents who can afford to should spend it.

“I would encourage you and ask you to spend that $600 at local businesses as fast as you can, at restaurants and bars on takeout,” Berry said. “Spend it safely. Protect yourself and others, but spend it locally, fast.”