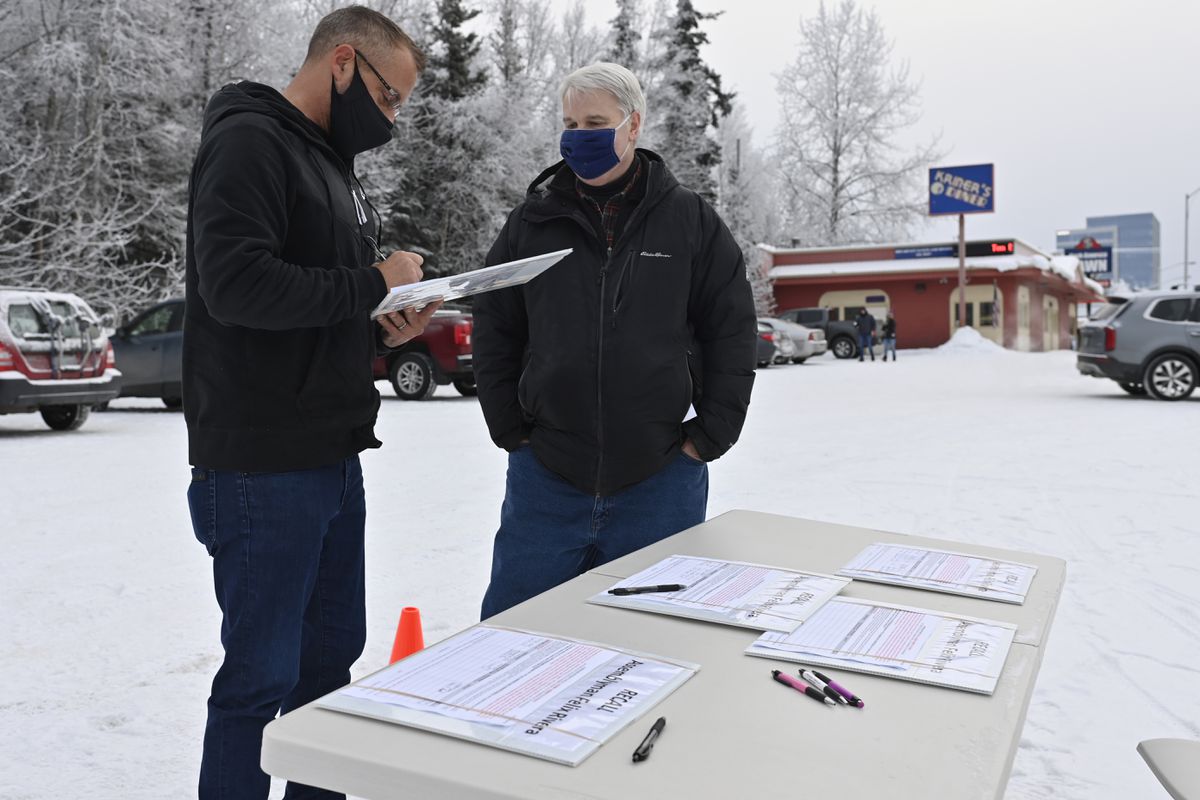 Petitioners attempting to recall Anchorage Assembly Chair Felix Rivera say they have more than the required number of signatures needed to initiate a recall vote.

The petitioners have had two months to gather enough signatures since the Anchorage clerk’s office in early November approved in part the petition to recall Rivera. Rivera is a representative of Anchorage’s District 4, which includes Midtown.

Petitioners must submit the signatures to the city clerk Tuesday. They must have the required 2,735 signatures — 25% of the number of votes cast for the seat in the April 2020 election — for the recall vote to go to the ballot.

After the petition signatures are turned in, the city clerk has 10 days to verify whether enough have been gathered, according to state statute.

It also claims that Rivera committed misconduct in office, but that claim was rejected by the clerk’s office.

Beyond the petition’s stated reasons for a recall, it has garnered support from residents who are upset with the Assembly’s recent actions to support the acting mayor’s emergency orders related to the pandemic and a controversial vote to approve purchasing buildings for homeless and treatment services.

“Over the last 9 months, these 5,000 Anchorage citizens have watched Felix Rivera and the majority of the Anchorage assembly divert nearly 50 million dollars of CARES act funds to pet projects like bike trails and derelict property purchases,” the petitioners said in an emailed statement. “These 5,000 citizens have watched hundreds of businesses fail while the majority of the assembly, chaired by Felix Rivera, voted consistently to prioritize cronyism and corruption over the economic needs of the thousands of Anchorage citizens losing their jobs.”

Rivera disputes the reasoning behind the recall.

“I can understand why folks may be upset with me for a variety of decisions that I’ve made, but that is not sufficient grounds for recall,” Rivera said in an interview Monday. “You don’t like the decisions I’ve made, then you run against me in a regular election. Beat me in an election.”

If the signatures are verified, the petition would then go before the Assembly to put the recall vote on a ballot. According to Alaska statute, the Assembly must either hold a special election no sooner than 45 days and within 75 days after it’s submitted, or put it on the ballot at a regular election if there is one already scheduled within 75 days but not sooner than 45 days after it’s submitted.

[As Anchorage restaurants and bars get ready to reopen once again, the future remains murky for many]

A different group, calling itself the Midtown Citizens Coalition, has filed a lawsuit in support of Rivera. The lawsuit is against the Municipality of Anchorage and Municipal Clerk Barbara Jones for approving the recall petition in the first place. A complaint filed in the case asserts the approval was based on “legally defective or insufficient” grounds.

Attorney Thomas Amodio of Anchorage law firm Reeves Amodio is leading the group’s litigation. Amodio said he is not working for Rivera, but rather for a concerned group of citizens in Anchorage’s District 4.

The challenge, if upheld by the court, could topple the recall petition’s efforts, regardless of whether enough signatures are gathered.

Scott Kohlhaas, a political consultant hired by the recall group, on Monday worked to gather signatures outside Kriner’s Diner on C Street. (Last year, Kriner’s defied an Anchorage pandemic emergency order and remained open for indoor dining, resulting in a short legal battle during which the courts upheld the city’s order.)

“We’ll explain that he’s the Assemblyman who broke his own law. And so your average person who’s not quite paying attention will get involved at that point. But most people who sign (the petition) are looking for it,” Kohlhaas said.

Other petitioners on Monday gathered signatures inside Duane’s Antique Market in the Taku/Campbell neighborhood. The market is owned in part by Christine Hill, who ran against Rivera in the 2020 election and is supporting the recall petition.

Hill is also involved with a different group that has sued the city and Assembly for closing the Assembly meetings to in-person participation while Emergency Order 15 was in place in August. The meetings were livestreamed and citizens could participate and offer testimony telephonically.

Anchorage resident Josh Holland on Monday drove to Kriner’s to sign the petition. Holland said he disagrees with nearly everything Rivera has done while on the Assembly and that he did not vote for him in the first place.

In particular, Holland is concerned with the public getting shut out of the Assembly’s decision-making process.

“They haven’t allowed the public in certain points and voted on things without public hearing and put a bunch of the hearings off,” Holland said. “I just feel like the general public just doesn’t have the same voice that we should have.”