He went from a childhood in Anchorage to alt-right fame. Now, the social media personality known as Baked Alaska has been arrested for storming the U.S. Capitol. 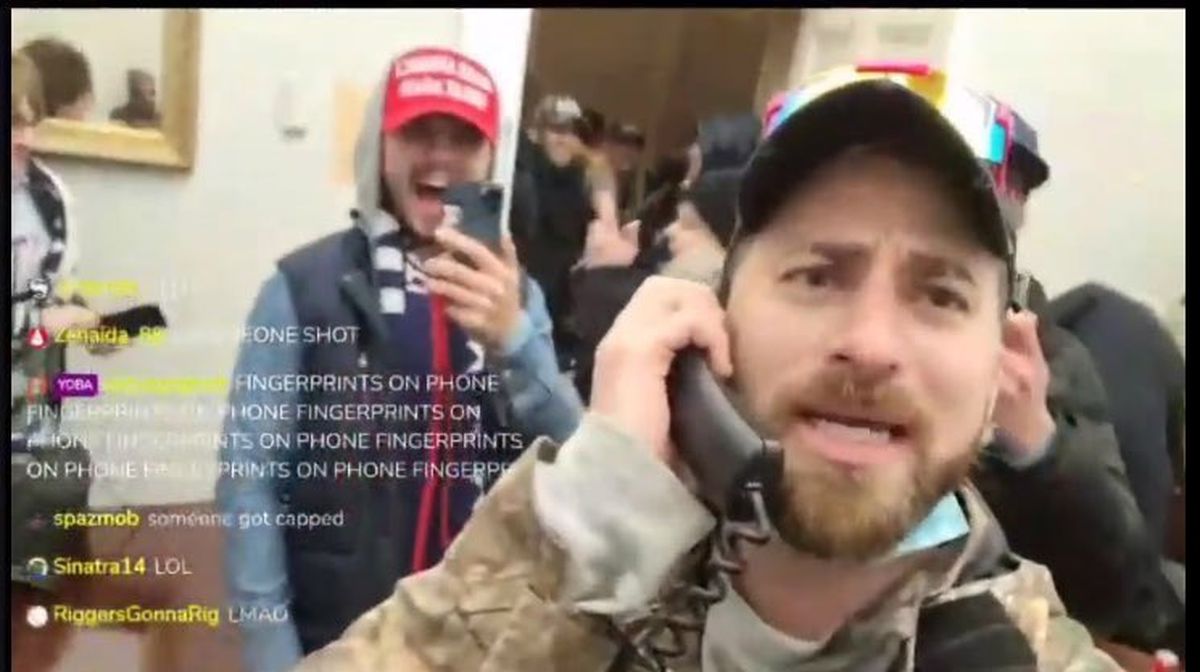 Tim Gionet strolled through the U.S. Capitol like he was walking through a crowded fraternity party, shouts echoing off the marble floors. The hallways were jammed with people, young and old, men and women, wearing MAGA hats and holding signs, chanting and hollering about Trump and a stolen election.

At one point, a voice offscreen suggested that President Donald Trump might not be happy about his supporters’ forced entry and occupation of the building.

“No, he’ll be happy!” Gionet countered. “What do you mean? We’re fighting for Trump.”

It was Jan. 6, 2021, and Tim “Baked Alaska” Gionet, son of Anchorage, was livestreaming himself at an insurrection in the U.S. Capitol building before an online audience of thousands. Ten days later, the 33-year-old is under arrest by federal agents, charged with “knowingly entering or remaining in any restricted building or grounds without lawful authority” and “violent entry and disorderly conduct on Capitol grounds.”

Federal agents say Gionet’s prolifically incriminating 27-minute livestream as well as his online fame led to his identification and arrest.

“The defendant is a known social media personality and is thus recognizable,” FBI Special Agent Nicole Miller wrote in a criminal statement of facts included with Gionet’s charges.

Federal authorities aren’t just interested in Gionet, the man behind the camera: One of posters released by the FBI cataloging persons of interest is made up entirely of faces captured on Gionet’s livestream.

Gionet was arrested by federal agents in Houston on Saturday, The Associated Press reported. He was also sought by prosecutors in a criminal case in Scottsdale, Arizona, for breaking his terms of release on a December assault charge — he allegedly pepper sprayed a bouncer — by traveling to Washington, D.C., for the rally, and for “unlawful conduct.” On Friday, he posted a $3,000 bond in that case, The Arizona Republic reported.

Since 2016, the 33-year-old, under the name “Baked Alaska,” has become one of the most visible figures in a far-right movement, a personality known for espousing white nationalism and anti-Semitism. A vast archive of his behavior can be found on the internet via countless videos, social media posts and livestreams. But until now, little about his earlier years in Anchorage has been publicly known.

Though much has been written about Gionet, it’s hard to get anyone who actually knows him to attach their own name to what they have to say about him. Some people say they fear being targeted or doxxed by internet sympathizers. Others say they have respect for Gionet’s family and don’t want to alienate his parents.

Here’s what is known, through conversations with people close to the family, former schoolmates and co-workers and public records: Gionet was raised in Anchorage, the youngest biological child of Paul and Susanne Gionet, a pharmacist and nurse who have operated a home infusion therapy pharmacy.

The family has not spoken publicly about their son’s growing notoriety. Paul and Susanne Gionet did not respond to calls for this story.

There, the Gionet family stood out, alumni remember. In the 1990s, the Gionet family started a missionary organization, Russian Encouragement Ministries, now known as REM Alaska, which led trips to the remote Russian Far East. They adopted five children from Russia in addition to their biological kids and brought groups of 10-20 people, usually affiliated with Grace Christian School, to Russia for mission trips.

Participants in some of those trips remember the family as kind and dedicated.

Schoolmates remember Tim Gionet as charismatic but manipulative, and at times a bully. The family moved to Russia for a year while he was a child to work on their ministry, and he repeated a year of school when they returned. He ran cross-country and played soccer in high school. Senior year at Grace Christian School, he was elected class president. Classmates voted him “Most Sarcastic.”

The family raised kids who went into successful careers in health care, including one sibling who became an Anchorage physician. More recently, the family has been trying to develop a parcel of land on the Anchorage Hillside into a new subdivision. Paul Gionet was treasurer of the Hillside Community Council until this month.

After graduating in 2006, Gionet went off to Azusa Pacific University in California, an evangelical school close to Los Angeles. After college, Gionet took on the persona Baked Alaska, wearing oversized gold chains, an ironic bleached blond mullet and a mustache. He became a purveyor of novelty rap songs that traded on his roots in Alaska, with lyrics like “I cook moose like TGI Friday’s” and titles such as “I Live on Glaciers.” His music videos featured dramatic close-ups of Gionet playing with guns in a field, bears that appear to have been filmed at the Anchorage zoo and the rapper handing a Miller Lite to a passerby in a Spenard parking lot.

He tried to separate the persona from the person. In a 2013 Daily News profile of “Baked Alaska” the rapper, he refused to tell a freelance reporter his real name, or which Anchorage private school he graduated from.

In a moment of foreshadowing of his future career as an alt-right internet personality, he referred to his mastery of what he called “expectancy violations,” a communication theory about the way humans react to unexpected subversions of social norms.

“It’s when you say the complete opposite of what people think you’ll say,” Baked Alaska said.

In 2014, Gionet was hired at BuzzFeed, thanks to his robust following on the now-defunct short video sharing platform Vine. His co-workers just called him “Alaska.” Even his bosses thought his name was Timothy Treadstone.

He was so protective about his real identity that he once bailed on a team-building group trip to the taping of a game show because it would have required him to disclose his legal name, a former colleague told the Daily News.

BuzzFeed was a liberal environment, and Gionet wasn’t received well by colleagues who found some of his jokes and comments to be racist. His former co-worker remembers him being “called out” multiple times for things he said or did.

Former BuzzFeed editor Ben Smith, now at The New York Times, wrote last week that “the language I heard from Mr. Gionet, now 33, on his livestream last Wednesday was familiar.”

“He fit in as well as anyone did at our Los Angeles studio, a place full of ambitious misfits with an unusual gift,” Smith wrote. “They knew how to make web videos people wanted to watch. His value to BuzzFeed was clear: He’d do anything for the Vine, the short video platform that had a brief cultural moment before being crushed by Instagram and Snapchat in 2017. Once, he poured a gallon of milk on his face and a clip of it drew millions of views, back when mostly harmless stunts amused millions of American viewers on the platform.”

At the time, he was known as a Bernie Sanders supporter and kept a big portrait of Sanders on his desk. But after it became clear that Hillary Clinton would be the Democratic candidate for the 2016 presidential election, he started to wear MAGA hats to work. In short order, he quit his job to manage a tour by right-wing internet villain Milo Yiannopoulos. His co-worker remembers his departure being abrupt — he still had the Bernie Sanders portrait on his desk.

He enmeshed himself in radical right-wing circles, at one point interviewing white nationalist and “father of the alt-right” Richard Spencer from his parents’ basement on the Anchorage Hillside. Gionet filmed himself attending the notorious “Unite the Right” white nationalist rally in Charlottesville, Virginia, where he was billed as a featured speaker.

“This guy’s great,” Anglin said on a podcast. “We’re very happy to have another great guy involved in our movement.”

All the while, he relentlessly sought attention — views, clicks, likes, haters — and found plenty. Eventually, Gionet’s posts got him kicked off major social networks such as Facebook, Twitter and YouTube. The internet seemed to love to hate him: There are entire “Baked Alaska cringe” compilations of Gionet approaching strangers in an In-N-Out burger parking lot to complain about being kicked off Twitter, crying for milk after he was pepper sprayed in Charlottesville and getting into altercations with various store clerks.

For a moment, he tried to backpedal. In 2019, he said he had “recently left the alt-right.” He regretted “ever contributing anything to that culture.”

“I was just a normal guy who liked memes and I got radicalized,” he said.

Around the same time, in an interview with The Daily Beast, Gionet said his alt-right career had been “a pretty big disaster, to be honest.”

It had ended lifelong friendships and relationships with family members, he said, and had been “terrible for my employment opportunities, my reputation.”

Gionet made trips to Alaska in recent years, during gaps in housing situations and attempts to “reset,” people close to the family say. Public records show Gionet has more recently been living in a home owned by his parents on the outskirts of Phoenix.

Banned from Twitter, YouTube and other social media platforms, Gionet took his shtick to streaming sites like DLive. DLive caters to gamers and attracts a younger audience, said Hannah Gais of the Southern Poverty Law Center, who has tracked Gionet’s role in the alt-right world for years.

He mostly used his livestreams to start assorted trouble: Confronting store clerks in Arizona while maskless during the pandemic, getting into fights with people out at bars. When President Donald Trump called his supporters to Washington, D.C., on Jan. 6 for a rally that he promised would be “wild,” Gionet made sure to be there.

All of the years of attention-seeking built to a crescendo on Jan. 6, when Gionet took the people watching him on DLive inside the Capitol. He stalked around, saying things like “1776 will commence again!” and picking up a phone in a congressman’s office, placing a mock phone call to say that the election had been stolen.

Later in the stream, Gionet echoed words Trump would soon use to describe the crowds that had violently forced their way into the seat of the U.S. government.

“Everyone here is a patriot, and a hero,” Gionet said, his voice ragged with excitement. “I love everyone here.”

Comments popped up on the stream, surfacing like bubbles. Sixteen thousand viewers. So many people were watching.