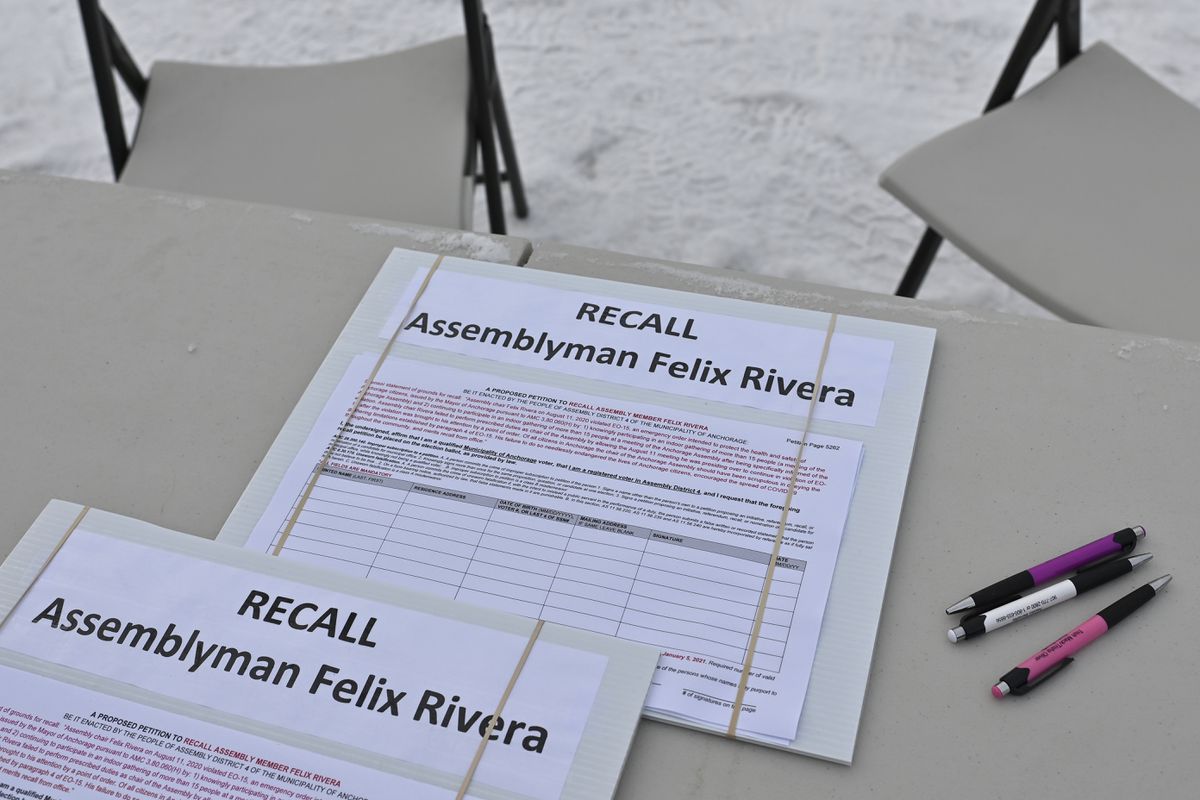 A petition to recall Anchorage Assembly member Felix Rivera is set up outside Kriner's Diner in Anchorage on January 4, 2021. (Marc Lester / ADN)

A petition to recall Anchorage Assembly member Felix Rivera is set up outside Kriner's Diner in Anchorage on January 4, 2021. (Marc Lester / ADN)

A petition to recall Anchorage Assembly chair Felix Rivera was certified by the city clerk Friday and a vote is set to be placed on the April ballot for voters in District 4.

The clerk’s office verified that the petitioners turned in the required 2,735 signatures of voters from Anchorage’s District 4, according to a letter from the clerk’s office to petition sponsor Russell Biggs.

The required number of signatures is 25% of the number of votes cast for the seat in the April 2020 election, during which Rivera was elected. Rivera’s district includes the Midtown area.

The petition will next go to the Anchorage Assembly at its next meeting on Jan. 26, according to the letter. The next regular election is on April 6, within the 75-day window of time that a recall vote must be held following the Assembly’s receipt of the certified petition.

The clerk’s letter also notes that the decision on the recall petition is “subject to judicial review by direct appeal to the Superior Court of the State of Alaska.”

There is a group supporting Rivera that is filing a lawsuit against the Municipality of Anchorage and Municipal Clerk Barbara Jones for approving the recall petition.

The petition claims that Rivera failed to perform his duties as Assembly chair during an August Assembly meeting, when Rivera did not halt the meeting after another Assembly member said the meeting may have exceeded the capacity restrictions required by a pandemic emergency order.

Rivera said he maintains the recall is “frivolous” and that he believes it will die in court. If that does not happen, he said, “it’ll be up to the voters of Midtown, who have elected me once and re-elected me ... I remain confident that it’s not even going to get on the ballot but we will see.”

Support for the petition has a foothold with a group of residents upset with the Assembly’s recent actions surrounding management of the pandemic, including its support of the acting mayor’s emergency orders and a controversial vote to approve purchasing buildings for homeless and treatment services.

In an emailed statement Friday, the recall sponsors said they were “deeply disappointed by the lawsuit” and said the recall’s supporters “labored diligently over the last 60 days to utilize the democratic remedy enshrined in our Alaskan constitution to remove our representatives for gross misconduct.”