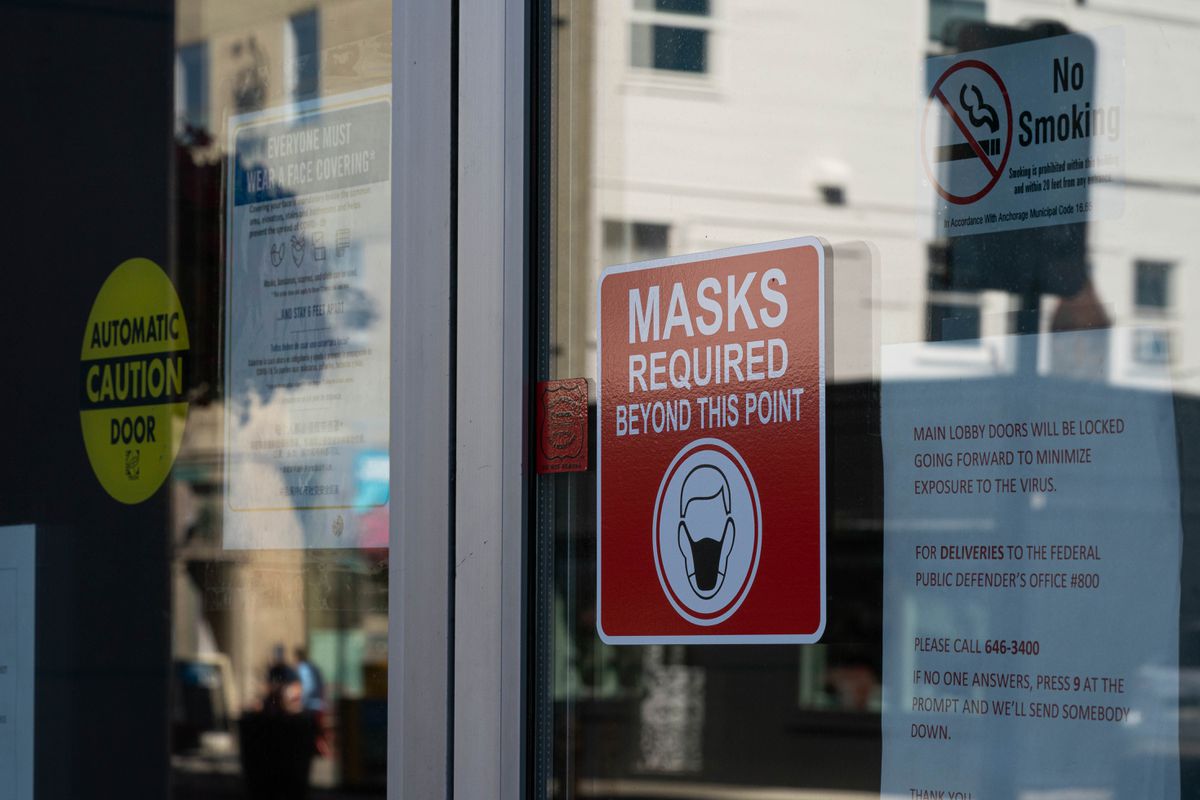 A sign requiring masks is affixed to the door of an office building on Thursday, July 23, 2020 in downtown Anchorage. (Loren Holmes / ADN)

A sign requiring masks is affixed to the door of an office building on Thursday, July 23, 2020 in downtown Anchorage. (Loren Holmes / ADN)

Some emergency orders put in place by the Anchorage mayor to address the coronavirus pandemic may be turned into city code by the Assembly, including the city’s mask mandate.

Several Anchorage Assembly members on Tuesday will introduce ordinances that, if passed, would change four existing emergency orders into citywide ordinances, including the requirement that individuals wear masks while in indoor public places and allowing businesses to give out plastic bags.

The ordinance would take the matter out of the hands of the Anchorage mayor’s office, regardless of the mayor’s support for masks. A new mayor will be chosen during the upcoming election on April 6, and take the office on July 1.

The Assembly won’t vote on the proposals on Tuesday; it will introduce the ordinances and wait until a future meeting to take comments from the public and decide.

Like other mask mandates across the U.S., Anchorage’s emergency mask order has been met with pushback from some residents. But a series of public-opinion surveys of city residents by the University of Alaska Anchorage throughout 2020 found widespread acceptance, with more than 80% in November reporting they wore a mask “most or all of the time when not at home.” That number jumped to 90% in December. A statewide survey by Dittman Research in November found a majority of Alaskans support mask-wearing.

Acting Anchorage Assembly Vice Chair John Weddleton, a sponsor of the four ordinances along with Assembly members Meg Zaletel and Suzanne LaFrance, said the proposals are the first step toward addressing issues of legislative power in Anchorage that have come up during the pandemic.

Weddleton said he has heard from many residents, including during public testimony at Assembly meetings, who are concerned about the amount of power in the mayor’s office.

Earlier this month, the Assembly extended its COVID-19 emergency declaration into April. That declaration gives Acting Mayor Austin Quinn-Davidson the authority to enact emergency orders in response to the pandemic. The emergency declaration also enables the city to take actions for its pandemic response, like reassigning municipal employees and moving money around for needs like an emergency shelter for the homeless.

Instead, city laws usually go through a legislative process that includes public input and discussion. Then Assembly members vote on what goes into city law.

By April, it will have been more than a year that Anchorage’s mayors have had that power, he said.

Some have decried the city’s emergency order requiring masks as infringing on individual rights, including Assembly member Jamie Allard. Allard said in an interview she is against putting the mask emergency order into city code.

“People have shown they’re willing to wear a mask, and some don’t. And I think that’s an individual decision,” Allard said. “I do not agree with people being legally made to cover their faces.”

The basic outcome of each of the mayor’s mandates would not change, Weddleton said. As currently written, each ordinance revokes the emergency order it replaces and instead puts the content of the order into city code, he said.

“We right now have a mask law. The emergency order — we call them mandates — is a law,” Weddleton said. “And by putting it in an ordinance, it is also a law. That doesn’t really change any aspect.”

What would change is the process — citizens would have input and Assembly members would discuss and debate ways to change the ordinances, he said.

Part of that process would include deciding when and how the Assembly will end the ordinances, since they are meant to be temporary responses to the pandemic, Weddleton said.

The Assembly could include a “sunset clause” that requires it to renew each ordinance monthly, for example, Weddleton said.

The emergency orders the Assembly is considering putting into code are:

• Requiring that people wear masks covering their nose and mouth in indoor public spaces, or at outdoor gatherings where a six-foot distance between people isn’t possible.

• Allowing temporary changes to where bars and restaurants can serve alcohol. This has helped businesses open temporary outdoor dining areas.

Allard said that she sees the mask ordinance as an overreach of the Assembly’s power, and that it could be a way to keep the mandate in place for longer than the acting mayor, or the soon-to-be-elected new mayor, would.

“It’s a longer duration of time, and there’s different consequences to the citizens,” Allard said. “And then in order to take that back, we have to have the Assembly come together and vote on it.”

Still, Allard said that she supports anything that helps businesses survive the pandemic, and so she would support the changes to curbside pickup and outdoor alcohol services becoming ordinances.

Public hearing on the ordinances is set for Feb. 9, Weddleton said.