Anchorage to announce it will further ease COVID-19 restrictions, allowing more people in bars and restaurants 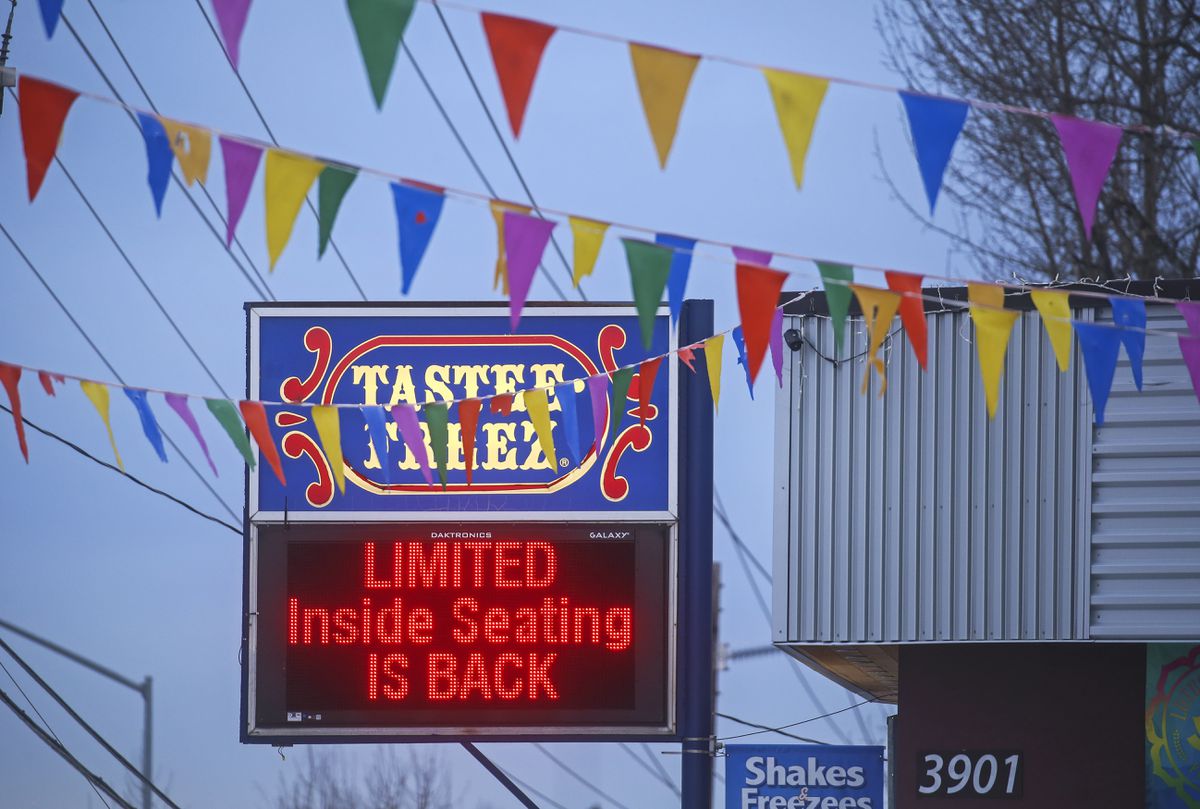 A sign alerts customers to the return of limited indoor seating as it hangs above Tastee Freez in Anchorage on Jan. 21. (Emily Mesner / ADN)

A sign alerts customers to the return of limited indoor seating as it hangs above Tastee Freez in Anchorage on Jan. 21. (Emily Mesner / ADN)

The Anchorage acting mayor’s office plans to further ease some of the municipality’s COVID-19 restrictions in a new emergency order to be announced this week.

Capacity restrictions on hospitality businesses like restaurants and bars will change from 25% to 50%, Jason Bockenstedt, chief of staff for Acting Mayor Austin Quinn-Davidson, said Wednesday night at an Anchorage Assembly meeting. The time limit for businesses serving alcohol will also change from 11 p.m. to midnight, he said.

Chris Schutte, the city’s director of economic and community development, said the administration conducted a comprehensive analysis of the community’s public health conditions to craft the new order.

They have improved enough to “gently ease our foot off the brake even further,” he said.

“It’s bearing fruit,” Schutte said of the previous restrictions. “... The community has done a very good job of sticking with the tough mitigation protocols that are in place, but it’s paying dividends.”

Case counts spiked in Anchorage in November, and the city closed restaurants and bars to indoor dining for the month of December.

The statements from members of the mayor’s office were prompted by a debate among Assembly members over a resolution that, if passed, would have terminated some restrictions imposed by Emergency Order 17, which is currently in effect.

The resolution is on the agenda at each meeting as an acknowledgement of the Assembly’s power to terminate emergency orders. But on Wednesday, capacity restrictions on restaurants and bars, gaming halls and theaters, and limitations on organized sports were considered for removal.

The Assembly voted to postpone the resolution indefinitely in a 7-3 vote. Members Jamie Allard, Crystal Kennedy and John Weddleton voted against the postponement.

“We’ve had a long decrease in cases and deaths and really no pressure on the kind of medical establishment or medical facilities and primarily, our goal is to protect that,” said Weddleton, a sponsor of the resolution along with Allard. Weddleton said the resolution recognizes that the city should loosen restrictions when it can.

Weddleton also noted that the Matanuska-Susitna Borough has far less restrictions than the Municipality of Anchorage and that it has seen “no great calamity.”

“That’s a very close case study, and we should be looking at what we’re doing in comparison to what they are,” Weddleton said. “Even loosening up as planned, we are still substantially tighter than they are.”

Dr. Janet Johnston, epidemiologist with the Anchorage Health Department, said that as cases in Anchorage have decreased, the municipality’s case rates have fallen to lower levels than the Mat-Su’s.

“There are also a lot of differences between the demographics and housing density in Anchorage versus the Valley, so we would actually expect the Valley to have lower levels if everything else was the same, based on those differences,” she said.

Assembly member Christopher Constant urged the Assembly to allow the mayor to “have a steady hand on the tiller and to remove these orders systematically as the evidence permits.”

Constant said that soon the city will see if there are any public health impacts of reopening elementary schools, which opened some classrooms for in-person school last week. Alaska’s high rate of vaccination per capita is also a sign of hope, he said.

Quinn-Davidson said the administration is also looking at ways to ease restrictions and working with industry and organization leaders of the affected areas, such as hospitality industry leaders and organized sports groups.

“I am incredibly anxious, as I know all my colleagues are, to ease these restrictions and get our businesses back so that they can be working in full, full capacity,” Assembly member Kameron Perez-Verdia said.

Still, he said that he believes the actions taken by the city have helped curb the spread of the virus.

“I would just encourage the administration to move as quickly as you can, based on good data and good research, to open our city back up,” he said.