After more than 10 months in lockdown, the Anchorage Pioneer Home opens to families and visitors 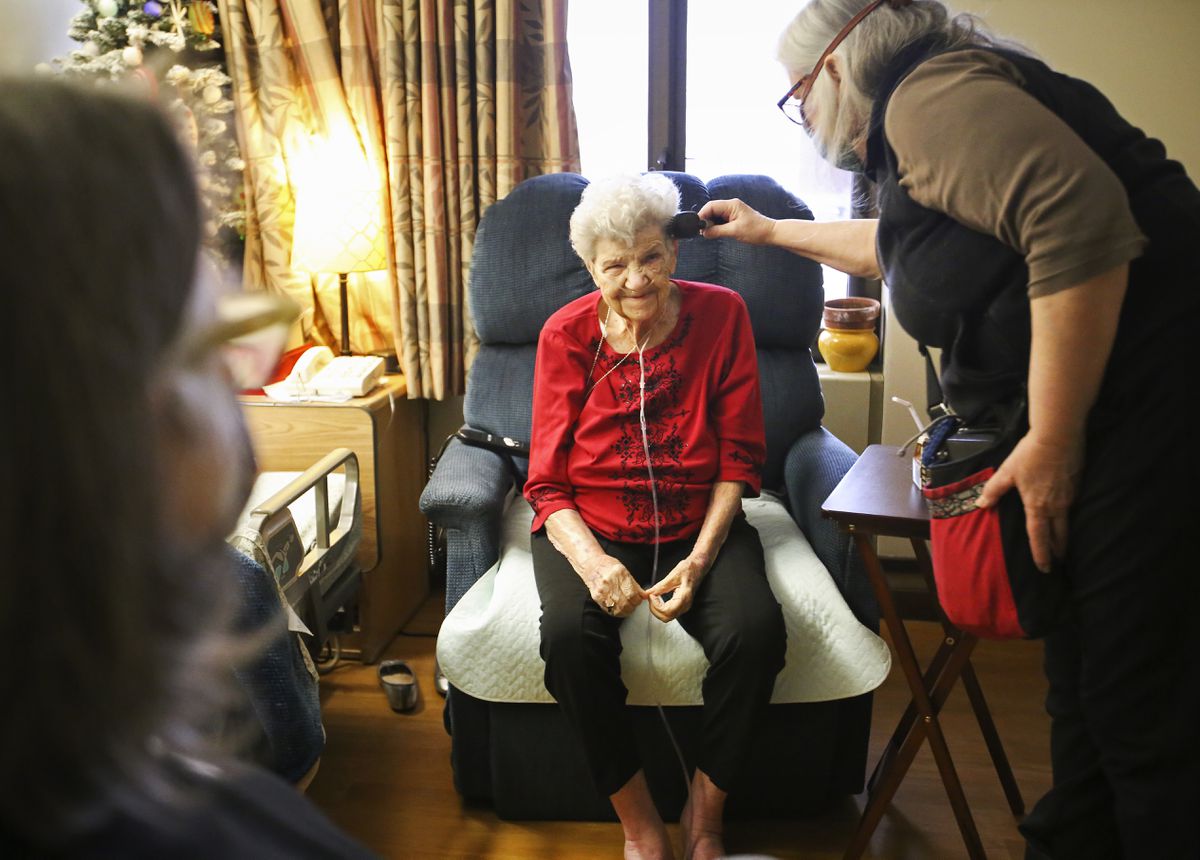 Kim Kiml brushes her mother's hair while she and her sister, Winter Wolf, visit her at the Pioneer Home in Anchorage on Wednesday, Feb. 3, 2021. Their mother, Ellie Brimanis, hasn't been allowed to have visitors since mid-March due to pandemic restrictions. (Emily Mesner / ADN)

Kim Kiml brushes her mother's hair while she and her sister, Winter Wolf, visit her at the Pioneer Home in Anchorage on Wednesday, Feb. 3, 2021. Their mother, Ellie Brimanis, hasn't been allowed to have visitors since mid-March due to pandemic restrictions. (Emily Mesner / ADN)

Winter Wolf and Kim Kiml walked through the newly unlocked front door of the Anchorage Pioneer Home on Wednesday morning carrying a box of single-serving bottles of merlot, and a wreath of paper pink hearts.

It was the first time in 10 months and two weeks that the sisters had been able to visit their mother, Eleanor “Ellie” Brimanis, in person.

“Today is fantastic, a very good day,” Wolf said. Before the pandemic, she and her sister used to visit their mom at least once a week.

While some of those homes have been able to reopen to visitors at various points throughout the pandemic, high rates of community spread in Anchorage — and several virus outbreaks among residents and staff — had kept the local Pioneer Home shut until now.

The many months of isolation have been extremely hard on residents, and families and staff said Wednesday that it was a huge joy to finally be able to reunite families.

Richard Saville, who has been the home’s administrator for the past 11 years, teared up as he talked about what it felt like to reopen the home to families at last.

“I can’t even express the joy I’m feeling,” he said. “Imagine living in the same city as your son or daughter or mom and dad, and not being able to see them. That’s a huge sacrifice in and of itself. And that’s been really difficult on mental health for people who live here,” he said.

Until Wednesday, Anchorage Pioneer Home residents and their families had to rely on FaceTime and phone calls to stay in touch, with the exception of hospice or end-of-life care situations, Saville said. And while residents have had the option of leaving the building, most haven’t.

“We’ve really tried to get our elders to stay in as much as possible, but of course they have free will and can leave,” he said. “Most of them have been super great about not going out.”

Saville said the decision to reopen the home was based on steeply declining rates of infection in Anchorage over the last couple months, plus the fact that by mid-January, over 90% of the home’s 137 residents had received both doses of vaccine.

Now, the Anchorage Pioneer Home is open to visitors from 10 a.m. to 3 p.m. Mondays through Fridays, and from 9 a.m. to noon Saturdays. Safety precautions — including a limit of one visitor at a time, temperature and symptom screenings and social distancing — during visits are still being enforced.

The vaccines produced by Pfizer and Moderna are highly but not 100% effective, and only half the staff at the Anchorage Pioneer Home have chosen to get vaccinated so far. Still, Saville said knowing that the majority of residents are now much more protected against a serious infection has been a huge relief.

“This has definitely been the most stressful year of my life,” he said. “I felt like the vaccine has allowed this tremendous burden to be lifted off my shoulders.”

‘I’ll be seeing you’

“Last time I was in (my mom’s) room was March 14,” Wolf said. “We were able to FaceTime a few times, but it wasn’t so great because she doesn’t understand where we are and why we’re not able to touch or say hello in person.”

Brimanis — who turns 90 in just three weeks and loves go-go boots and dancing at cocktail bars — has dementia. In the fall, she was one of dozens of residents at the Anchorage Pioneer Home who caught the virus, despite the home’s many safety precautions.

Since the pandemic began in March, 43 residents and 35 staff at the Anchorage Pioneer Home have tested positive for COVID-19, and seven died with the virus, said Clinton Bennett, a communications director with the state health department.

There have been no cases at the home in the last month, Bennett said.

Brimanis only had some mild flu-like symptoms, her daughter said. She was lucky.

At the front door of the home, Palmer resident Philip Badger gave his father, Billy Badger, a big hug on his way out. His father lives just down the hall from Brimanis.

“I love you,” Philip Badger said. “I’ll be seeing you hopefully tomorrow.”

Billy Badger hugged him back, and waited in the lobby in his wheelchair until his son disappeared from view.