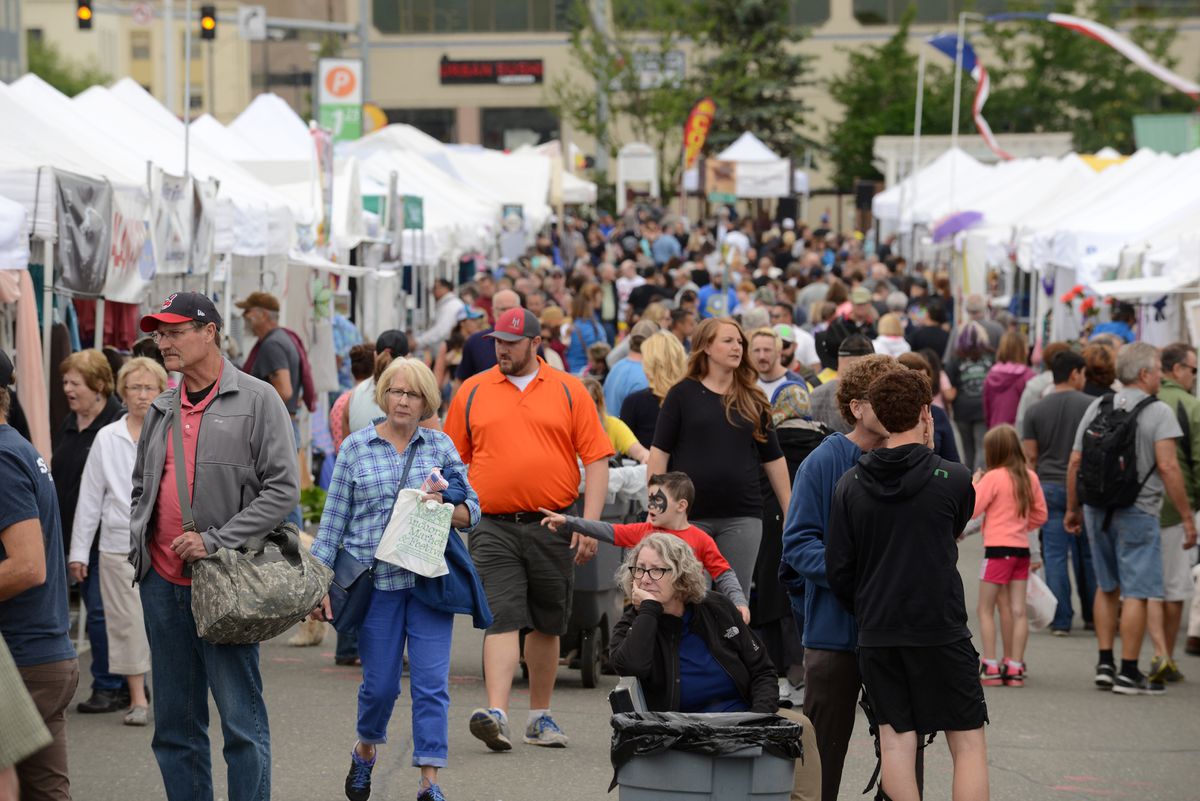 People browse the booths at the Anchorage Market and Festival in downtown Anchorage, Alaska on Saturday, July 1, 2017. (Bob Hallinen / ADN)

People browse the booths at the Anchorage Market and Festival in downtown Anchorage, Alaska on Saturday, July 1, 2017. (Bob Hallinen / ADN)

The Anchorage Market that’s been a downtown tourist draw for years is looking for a new site as the economic fallout of the COVID-19 pandemic appears set to continue for a second straight summer, according to organizers.

Fox said the drop in revenue and the forecast for another bad summer made it impossible to pay rent this summer to the landlord, the Anchorage Community Development Authority, a city agency.

“Due to the impacts of COVID-19, local mandates, a lack of visitors and the very large financial burden that it takes to operate such a market, we cannot remain in the same downtown location,” said a statement on Monday from Fox and Victory posted on Facebook.

The statement comes days after Canada announced it would ban cruise ships this summer, a move expected to eliminate cruise ships to Alaska for the second year in a row and sharply reduce tourists once again.

“We have done everything within our capabilities to keep our market open for you to enjoy and for our vendors partners to earn an income,” the statement said. “...But the financial impacts brought on by COVID-19 are not showing any signs of slowing.”

The market, with draws such as dog sled photos, salmon quesadillas and log carvings, has been at the same location, Third Avenue and E Street, for 28 years, the statement said. Hundreds of booths employ more than 1,000 people each summer.

The market and the authority agreed to terminate the “financially burdensome lease” on Monday, the statement said.

Fox said vendors dropped from about 400 to about 70 last summer. Even less were expected this summer, he said.

“The forecast is looking pretty bleak for Alaska this year, and a lot of our vendors are leaving the state,” he said.

The loss is another blow to downtown Anchorage, said Andrew Halcro, head of the authority.

Halcro said the authority had budgeted $128,000 for rent for parking and other space needed for the market. Now that’s off the books.

The cancellation of the ceremonial start of the Iditarod Trail Sled Dog Race in Anchorage, a pared-down Anchorage Fur Rendezvous Winter Festival and other called-off winter activities are hurting downtown and the parking revenue collected by EasyPark, part of the authority, he said.

“And now there’s a downer of a summer projected,” Halcro said. “Everywhere you turn you take another punch in the stomach. It’s just brutal.”

Fox and Victory said in the statement that their goal has been helping small business owners. They said they are announcing their plans to relocate and downsize the market with a “heavy heart.”

“We are working very aggressively on securing a new, more affordable location for our market in Anchorage, Eagle River or the Valley,” they said.