Initiative to recall Rivera is a ‘referendum’ on the Anchorage Assembly, proponents say 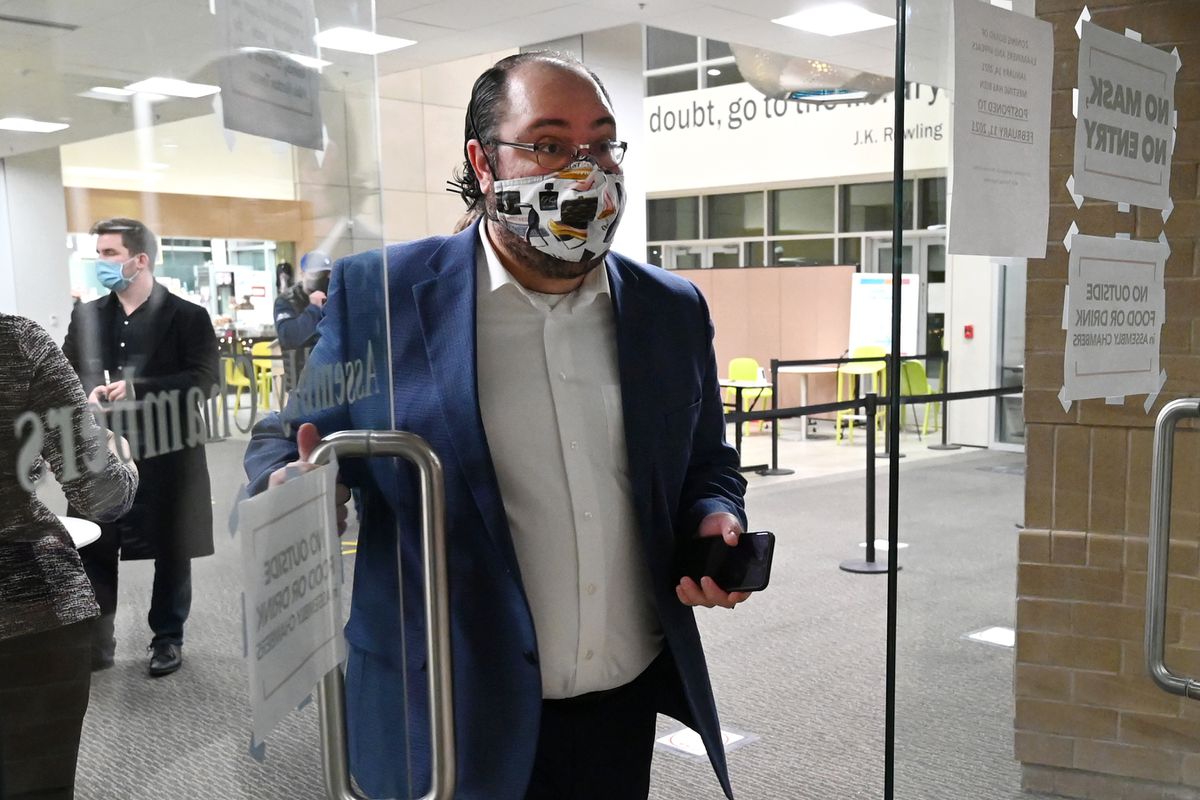 Anchorage Midtown voters are deciding whether Assembly Chair Felix Rivera should stay in office in a vote that some see as a referendum on how the Assembly has done its job over the last year.

Rivera faces a recall initiative on the ballot during the April 6 municipal election. His recall will be decided only by the District 4 voters he represents on the Assembly.

The recall petition’s approval was based on a specific incident at an Assembly meeting in August and the language does not include broad statements about Rivera or the Assembly’s work. It claims that Rivera failed to perform his duties as Assembly chair when he did not halt the meeting after another Assembly member said it may have exceeded the capacity restrictions required by a pandemic emergency order.

But the recall has traction with a group of residents upset with the Assembly’s actions over the last year, especially surrounding its management of the COVID-19 pandemic, CARES Act funds and its support of the former and acting mayor’s emergency orders.

Russell Biggs, a local anesthesiologist, is a sponsor of the petition and has organized much of the recall effort, including the Facebook page Reclaim Midtown.

“This is a referendum on the entire progressive left of the of the Assembly,” Biggs said. “They’ve walked and marched in lockstep with a lot of their voting.”

He said he would see a successful recall as a “repudiation of that kind of behavior.”

[Here’s how to be sure your ballot is counted]

“At the end of the day, the recall is about a rejection of governance that doesn’t represent the constituents,” Biggs said.

Rivera and his supporters say that the recall is part of a conservative agenda to attack a largely liberal-leaning Assembly.

“They’re trying to, as the chair of the Assembly, pin everything that has happened over the last year, and decisions that we have made, on me — as if I’m this boogeyman that that controls everything that happens,” Rivera said, “when in fact, we work really well together as an Assembly, and we collectively make these decisions.”

During the pandemic, a tense and sometimes heated atmosphere has grown in Assembly meetings, and there have been protests outside the chambers.

Some residents expressed outrage over the city health mandates and a controversial vote last summer approving a plan to purchase buildings for homeless and treatment services. The Assembly designated about 8% of the city’s $156.7 million in CARES Act funds for that project.

Biggs has called for more transparency and accommodation of the “public interest” from the Assembly. If an Assembly member makes decisions largely based on an ideological agenda, and not in the interest of their residents, they need to be removed, he said.

Jenny-Marie Stryker, political and campaigns director for The Alaska Center, which has spent money to support Rivera, called the recall effort “a political stunt, basically in bad faith.”

“These are the folks running the recall who have opposed mask mandates every other week, who’ve tried to overwhelm the Assembly chambers,” Stryker said.

AFL-CIO and other groups back campaign to support Rivera

Rivera has substantial support from a few local groups which are spending tens of thousands to help counter the recall initiative, and from a group of Midtown citizens who previously challenged the recall in court.

Rivera has raised just over $11,000 for his recall defense campaign, a report filed with the state shows.

Still, thousands more dollars are helping him in other ways.

One group supporting Rivera is the Putting Alaskans First Committee. It recently spent more than $30,000 on television ads and media to oppose the recall initiative, according to a report filed with the state.

The committee is chaired by Joelle Hall, president of the Alaska AFL-CIO, the largest labor union in the state.

Rivera is not just a Midtown representative, but the Assembly chair for all of Anchorage, Hall said. He has done an “amazing job” during “arguably one of the most trying times we’ve ever had as a community,” Hall said.

“If they can come in and recall one person, this hurts us all,” Hall said. “When they would recall a lawmaker for, frankly, nonsense reasons, it hurts every one of us and it hurts every single one of the other lawmakers, too.”

Proponents of the recall are criticizing that financial support. Biggs said that much of it comes from outside Rivera’s district, influencing an issue that is centric only to Midtown.

[Anchorage voters will decide whether to fund police body cameras. Here are questions and answers on Proposition 4.]

“A disproportionate amount of nonorganic funding from political activist groups and unions could easily overwhelm what should be a grass-roots campaign and District 4 ballot process,” Biggs said.

The recall campaign has raised just more than $18,500 for its efforts, according its most recent report with the state.

Donations to the recall campaign come primarily from Anchorage and Midtown residents, Biggs said. The group has paid out over $15,000 to an out-of-state political research firm, a report shows. It helped the group target the right voters, including direct mailings, Biggs said.

Biggs called the $30,000 from the Putting Alaskans First Committee “a good example of how private donations versus big money donations swing elections,” Biggs said. “There’s no way our group could afford to run nonstop TV ads, and these guys have been running it full time. And it’s coming basically from one source — the AFL-CIO 30 grand.”

Rivera and his supporters have said that the reason for recall is baseless. Still, it will be up to voters to decide whether or not the allegation is true and warrants his recall.

A group of Midtown residents supporting Rivera challenged the recall initiative and the veracity of its claim in superior court, but a judge ruled that it could move ahead.

The judge noted that, according to legal precedence and Alaska law, the court and the city clerk can’t investigate whether the claims against Rivera in the petition are actually true.

Rivera said that he is “feeling very confident” going into the election.

“My neighbors can see through this recall campaign,” he said. “They see it for what it is and they don’t like it.”

If the recall initiative succeeds, “I’m not going to take any joy in fact this guy is removed from the Assembly,” Biggs said. “I will be happy that hopefully it will be the nidus for a change in tone on the Assembly.”