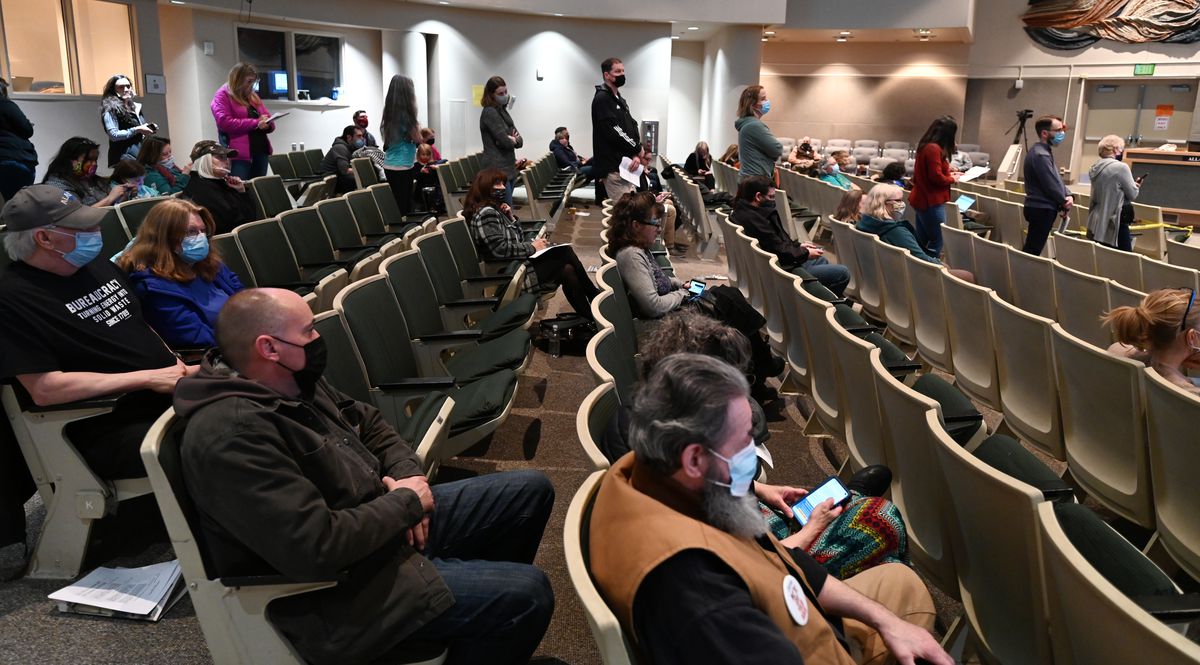 The Anchorage Assembly on Tuesday extended the city’s COVID-19 declaration of emergency to June 11.

The meeting was marked by tension and heated moments between Assembly members and residents in attendance, and one man was escorted from the Assembly chambers and trespassed out of Loussac Library by Anchorage police.

Quinn-Davidson’s latest emergency order, EO-20, will go into effect at 11:59 p.m. Friday. It ends restrictions on outdoor gatherings aside from masking and social distancing, and ties its COVID-19 restrictions to a vaccination target of 70% of eligible residents. Once the city reaches the vaccination target, the order becomes advisory.

In addition, the proclamation is an important piece of the city’s vaccine distribution plan, the mayor has said. It allows the city some flexibility with its procurement rules for supplies and contracts and to quickly reassign employees to respond to the pandemic.

The declaration was extended with some caveats: The Assembly shortened the timeline to the June date, while the acting mayor had requested the extension last through July 16.

The Assembly also required a biweekly report from the mayor’s administration on efforts to transition from the emergency operations back to normal.

Assembly Chair Felix Rivera, who voted yes on the extension, said he had reservations. Rivera asked the acting mayor to continue loosening restrictions and preparing to end the city’s emergency status and said he’d like to see the declaration’s effects be “as minimal as possible” by June.

Other members who supported the declaration said the city is in its last stretch of a marathon and that to revoke emergency orders now would put public health in a precarious position.

“One more round as we aim to get to community immunity,” Assembly member Chris Constant said.

Still, two Assembly members who previously voted to extend the declaration, Suzanne LaFrance and John Weddleton, voted against it.

“I just don’t see that we are in a situation of emergency,” Weddleton said.

The pandemic now is far different than in early 2020, he said, when hospitals were overrun around the globe and thousands of people were dying daily.

Now, businesses and residents know how to take health precautions like wearing masks and social distancing, and vaccines are widely available, he said.

LaFrance said she supports masking and social distancing for controlling the virus but that “it’s time for personal responsibility to play a bigger role.”

Kennedy said the target for removing the pandemic restrictions keeps changing, that the goal of a 70% vaccination rate is unrealistic, and that EO-20 pressures people into getting vaccines.

Lengthy public testimony on Tuesday evening preceded the vote and showed deep divisions among Anchorage residents on how the city should respond to the ongoing pandemic.

Many people in the chambers opposed any extension of the emergency and EO-20.

Some who spoke characterized EO-20 as “blackmailing,” “bullying” and “extorting” residents into getting vaccinated. Many indicated they do not trust the safety of the COVID-19 vaccines.

The federal Centers for Disease Control and Prevention says the Pfizer and Moderna vaccines are effective and millions of people in the U.S. have safely been vaccinated for COVID-19.

Several people also called the emergency orders an abuse of power that infringes on residents’ freedom of choice, a power they say the acting mayor should not have.

Before voting “yes” for the extension, Assembly member Kameron Perez-Verdia challenged assertions by citizens who implied that the Assembly is not listening to its constituents.

There is a difference between considering the input of constituents and “ultimately making a decision that we feel is in the best interest of the city,” he said. “And that may not be the same one that you think.”

Many other residents phoned in during public testimony to speak in support of the extension and EO-20. Some said the mask mandate makes their workplaces safer and encourages more tourism and economic activity for local businesses.

Several people who spoke indicated they would not continue going into businesses in person if a mask mandate was not continued. Others expressed concern for children, who are not eligible for vaccinations, and said the mask mandate, social distancing and other COVID-19 precautions laid out in the emergency orders are necessary to protect them.

Turchetto loudly objected and demanded the chance to speak, with cheers and support from other attendees.

Rivera said that according to municipal code, 6 p.m. is the time when initial testimony ends. He called for security, and several Assembly members left their seats.

Security guards surrounded Turchetto, who proceeded to speak into the microphone. Several Anchorage police officers arrived to escort him from the chambers.

Turchetto then argued he had not broken a law and that he had a right to speak because Rivera had ended testimony early.

Turchetto eventually complied and police escorted him out of the Assembly chambers. He spoke at length with officers in the library lobby and then outside in the parking lot, where he received a trespassing charge.

He said he is planning to challenge the charge at his court date in June.

“The fact is, I wasn’t breaking the law,” he said. “... I was well within the Assembly’s charter, well within my time limit to speak. I had every right to speak, and sans a broken law, they can’t remove me from public property.”

In December another man was charged with trespassing and removed from the Assembly chambers by police.