In Friday’s updated Anchorage election results, leaders remain the same, but one school board race is headed for a recount 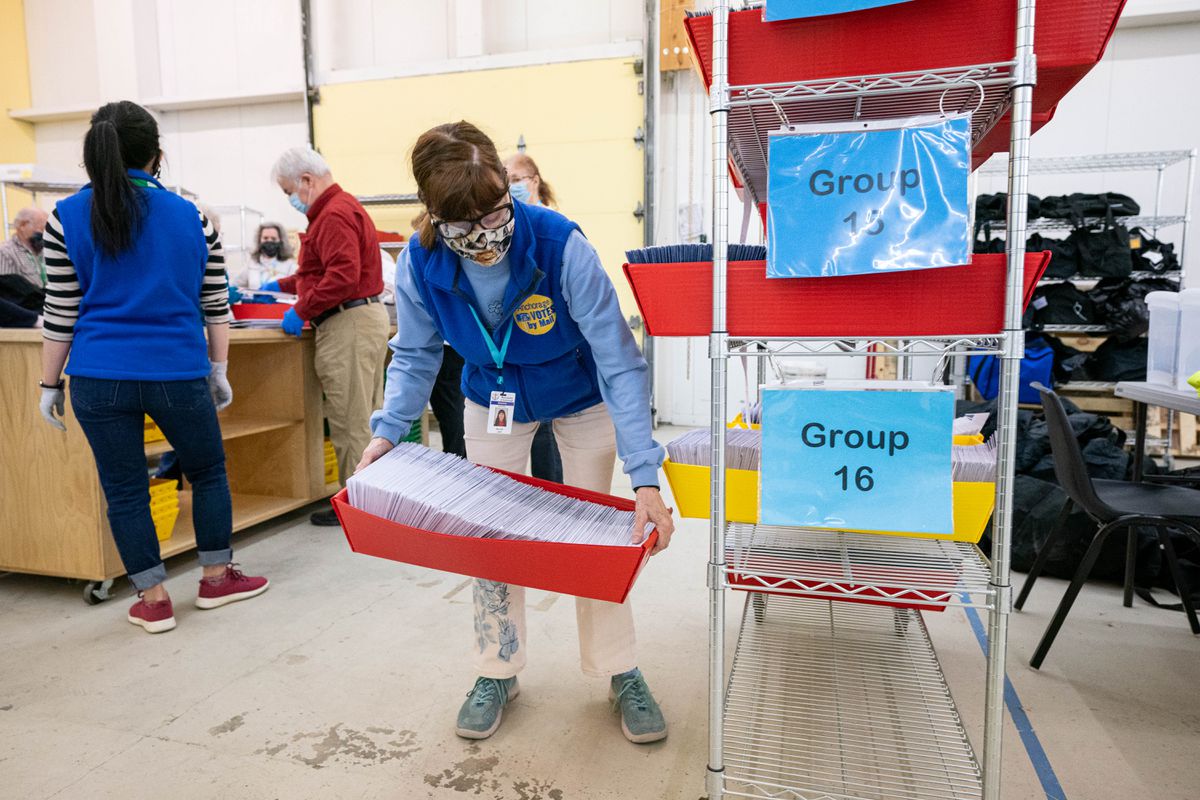 Election worker Bonnie Jack places a tub of ballots on a cart before they are placed in a mail sorting machine on Wednesday, April 7, 2021 at the Municipality of Anchorage election center. The municipality is continuing to count ballots a day after election day. (Loren Holmes / ADN)

Election worker Bonnie Jack places a tub of ballots on a cart before they are placed in a mail sorting machine on Wednesday, April 7, 2021 at the Municipality of Anchorage election center. The municipality is continuing to count ballots a day after election day. (Loren Holmes / ADN)

In the mayor’s race, Dave Bronson was still leading with just more than 33% of the vote, and Forrest Dunbar had 31% of the vote. The two will advance to a runoff election on May 11.

Each of the four leaders in the school board race have been endorsed by Anchorage Democrats and the Anchorage Education Association. Two of the leaders recently declared victory. For others, the race is closer, and one currently meets the requirement for an automatic recount. Two school board incumbents are set to lose their seats.

The election results are not official until they are certified by the Anchorage Assembly on April 20. More than 75,200 ballots have been counted so far, and Friday’s results are not final. Municipal Clerk Barbara Jones said the numbers will change Monday, with about 100 ballots left to count and more arriving by mail.

Although Friday was the last day a regular ballot postmarked on or before April 6 can arrive by mail and be included, overseas ballots can arrive and be counted until April 20.

In addition to mayoral and school board race leaders, the results for 11 ballot propositions, including seven bonds, and the results of the recall also remained unchanged Friday:

School board seat B:

Kelly Lessens is still ahead with 38.8% of the vote, but she has just a 0.36% margin — amounting to 235 votes — over opponent Judy Eledge, who has 38.44%. That means the city clerk will likely need to conduct a recount. Municipal code requires that a recount be conducted if a candidate wins by less than 0.5%.

Pat Higgins is leading with 33% of the vote, with 383 more votes than opponent Sami Graham, who has 32% of the vote. Incumbent Alisha Hilde appears to be losing the race. On Friday, Higgins in a news release declared victory over the five other candidates for the seat.

Dora Wilson is far ahead of the three other candidates in this race, with 45% of the vote and a 7,166-vote lead over opponent Kim Paulson. With so few ballots left to count, Wilson is also set to win the seat.

Carl Jacobs is winning against incumbent school board president Elisa Vakalis, who is poised to lose her seat. Jacobs, with a little more than 51% of the vote, has a 1,516-vote lead over Vakalis. Jacobs on Thursday also declared victory in a Facebook post.

District 4 voters are still rejecting an initiative to recall Anchorage Assembly Chair Felix Rivera. It had 43% of the vote on Wednesday.

Voters were still passing the five other bond propositions with wide margins.

Proposition 4, a tax levy to help the Anchorage Police Department replace aging technology and supply officers with body cameras, is also succeeding with about 54% of the vote.

Correction: A previous version of this story incorrectly stated that Pat Higgins declared his victory for school board seat E in press release on Monday. He declared victory on Friday.