Bronson and Dunbar emphasize differences over pandemic, police and other issues in mayoral debate 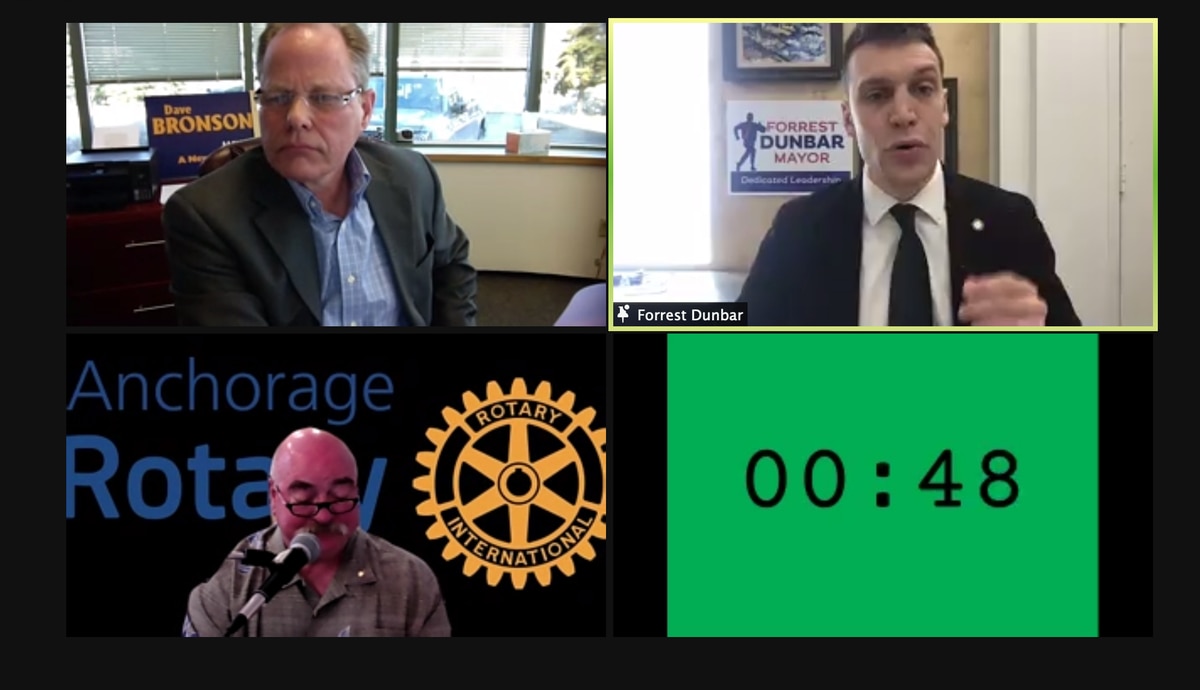 Dave Bronson and Forrest Dunbar, candidates in the May 11 runoff election for Anchorage mayor, doubled down on their differences during a debate littered with barbs and rebuffs on Tuesday.

“The distinction between Mr. Dunbar and myself, our worldview and how this government should be run in this city couldn’t be more distinct, more different,” Bronson said during his closing remarks. “We are literally at opposite ends of the spectrum.”

Bronson is a retired military and commercial pilot who served in the Air Force, Air Force Reserves and Air National Guard, and has made his vehement opposition the city’s handling of the pandemic a central part of his campaign.

At the debate, hosted by the Anchorage Rotary Club, Bronson said it is time to get schools open for classes five days a week and remove the mask mandate.

“We have to move out of this notion that we’re somehow still in the middle of a pandemic. We’re not,” Bronson said.

Dunbar, an Assembly member from East Anchorage, attorney and member of the Alaska Army National Guard, has largely supported the city’s handling of the pandemic and has voted to keep the emergency declaration in place, which gives the mayor power to enact mandates in response to the pandemic.

Dunbar said he believes that by summer, it is possible the city will no longer need a mask mandate or other health precautions due to the availability of vaccines and increasing vaccination rates. Even if the city does not reach the 70% vaccination rate goal, coronavirus cases could decline enough this summer to relax health precautions like the mask mandate, he said.

Bronson questioned Dunbar on his decisions on the pandemic as an Assembly member.

“Anchorage is in worse shape today because of the decisions, quite frankly, you have made,” Bronson said. “Why should voters trust you to suddenly make better decisions?”

Bronson later asked if Dunbar would “still vote nearly 20 times to shut down our city?”

Dunbar called the question a “mischaracterization of what we did over the last year,” saying that the city is not currently under any lockdown or capacity restrictions and that Anchorage has lower hospitalization and death rates than much of the country.

“We do wear masks — that’s true — because people are trying to protect each other,” Dunbar said. “We are trying to reduce the spread of this deadly virus, and we didn’t make perfect decisions. Everybody saw through the glass darkly at the beginning of this crisis, but we have tried to get relief to people who needed it most, we’ve tried to protect our citizens.”

Bronson and Dunbar also traded jabs over the Anchorage Police Department Employees Association’s recent decision not to endorse either candidate. Dunbar asked Bronson about a letter he wrote to the police association last week avowing his support and stating that “divisions of Black Lives Matter are violent and clearly anti-American.”

Dunbar said he spoke with an officer who described the letter as “a huge step backwards for APD.”

“Do you think that letter helped advance that long, hard work done by the police in our community to build trust, or was it just intended to prove divide people and score political points?” Dunbar said.

Bronson fired back, saying to Dunbar that police “rank and file revolted against you” and refused to endorse Dunbar.

“Quite frankly, I’m trying to figure out why they ever would support you, since you’re a defund the police advocate,” Bronson said. He also said he supports parts of Black Lives Matter that “are not a problem,” noting that he also denounced Antifa as a “domestic terrorist organization” in the letter and asked Dunbar why he has not condemned Antifa.

Dunbar said he does not support defunding the police. Dunbar said that as an Assembly member, he voted to increase the size of the police force by 100 officers and increase other support for the police department.

At another point in the debate, Dunbar asked Bronson about statements he had made over the last year about the presidential election, expressing views that “cheating” swayed the election for Biden.

Bronson said he does not continue to spread any information and said he doesn’t see his comments about the election as problematic.

“I was merely reporting on the news reports that were coming out. The mainstream media is not universal in its assessment that there was not widespread voter fraud,” Bronson said. “But the thing to consider here, which is important, Joe Biden is my president — I respect that decision.”

[Related: Forrest Dunbar has served on the Anchorage Assembly through a pandemic and protests. He says he’s campaigning for mayor on ‘fact-based leadership.’]